In pursuit of the land speed record

I first met Richard Noble in 1992. He was then the holder of the World Land Speed Record, having achieved a figure of 633mph in 1983 in Thrust 2. On learning that I had an aeronautical background, and specialising in high speed aerodynamics, he asked me to help him create a car to travel at supersonic speeds. My initial reaction (caused by ignorance of the effects of shockwaves at ground level, and the impracticability of having 800 mph rolling roads in wind tunnels) was a strongly negative one.

It was only after considerable thought that I told Richard that these problems could just conceivably be overcome. Even this modest reduction of pessimism was sufficient for Richard to introduce me to Glynne Bowsher, an experienced mechanical engineer who had previously worked on Thrust 2, and we commenced designing. The team was subsequently augmented by Jeremy Bliss, who had extensive experience as a systems and suspension designer for the McLaren F1 team.

Having no automobile engineering experience, I needed to find a starting point so I looked at LSR history. Clearly there are two separate records – wheel driven and jet/rocket driven. 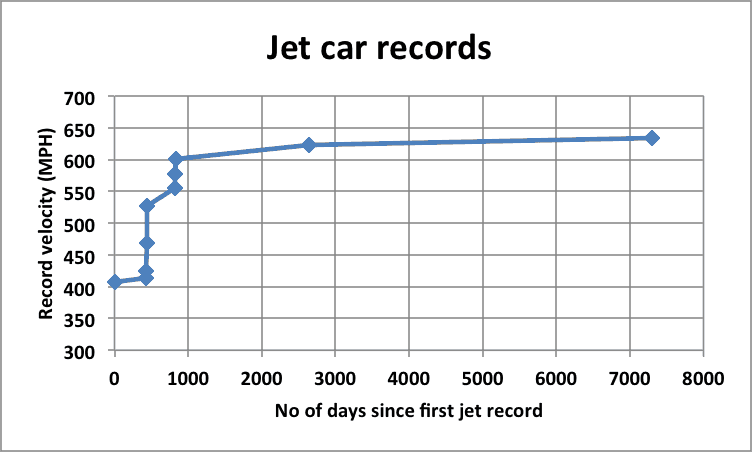 In the half century from 1898 to 1947, when John Cobb reached 400 mph (albeit in only one direction) the LSR had increased by a factor of 10). In the seven decades since then, the wheel-driven record has increased only by a modest percentage, appearing to approach an asymptote. A similar asymptotic limit can be observed with jet cars:

(Note: Blue Flame, a rocket car, has been included here for completeness).

From the first jet car record (407.45 mph in 1983) to the breaching of 600 mph took only 833 days. The percentage increase over subsequent decades has been very modest indeed. This curve looked to me like a barrier to further progress. In short, my target of 800 mph did not look achievable by simply using a ‘jet on a trolley’.

A pair of Rolls-Royce Spey 202s was available for a few thousand pounds, so this was our chosen solution. These amazing engines ran 66 times, often ingesting sand, and never once presenting us with the slightest problem.

The advantages of a two-jet solution

The layout of a single engine jet car presents the problem of where to locate the driver. He can hardly sit astride the engine like a jockey, so the unattractive choice is between driver-out-front as with Spirit of America (driver very exposed), and driver-on-one-side as with Thrust 2 (big vehicle frontal area). With two jets the solution is obvious. The driver can be located at the vehicle’s centre of gravity and protected by the enormously strong steel structure holding the two engines. The ratio of jet intake area/total frontal area is also much greater than for single jet layouts, with obvious benefits for performance.

Engines: front or back?

For structural reasons the engine mass had to be supported either by the front wheels or the rear wheels. Benefits, and problems, could be seen for both layouts. As our design team was so small, two unfunded people at that stage, we could only explore one option and had to make a choice. Our chosen layout, of mounting the engines over the front wheels, had immediate benefits with regards to stability but necessitated the use of rear wheel steering. It also exposed the rear body panels to the jet efflux from the two jets. These problems did, indeed, subsequently prove to be severe. Rear-mounted engines have avoided these problems, but would we have encountered stability or other difficulties instead? We will never know.

The problem we had to explore was that of trans-sonic ground effect. We could not do that using a wind tunnel as such tunnels could never be fitted with an 800 mph rolling road. Swansea University agreed to use CFD. Their Cray computer, state-of-the-art at that time, could process one million space elements which proved to be just sufficient to handle symmetric configurations in inviscid flow. The following is a pressure picture produced in 1993 – long before anyone else was using CFD for design purposes. 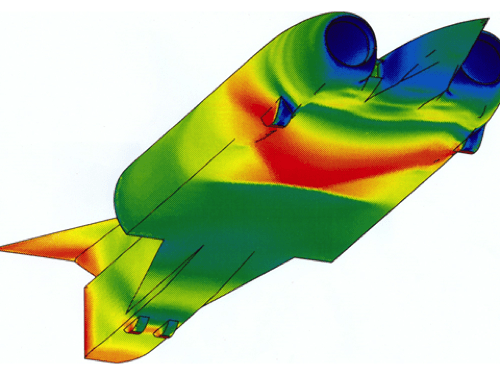 The strong shock wave visible across the middle of the body subsequently immortalised itself on Black Rock Desert with the following picture taken from a microlight.

My problem in 1993 was that no-one else had ever trusted CFD for design purposes. Indeed, the opinions I received were of the type: ‘Oh yes, we tried it once and the results were rubbish so we have ignored it since’. As Thrust SSC was the ultimate safety-critical project, I had to find some method of validating the CFD or we could not proceed. We designed and made a 1/25th scale model and instrumented it with high frequency pressure sensors. 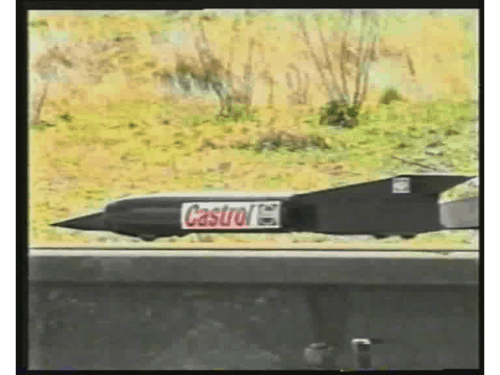 This model was accelerated from rest to 800 mph in 0.8 seconds, using a battery of rockets.

Amazingly, the results of this pioneering CFD correlated very well with the pressure readings from these rocket tests. Independent experts confirmed that the accuracy of CFD had been reasonably established so we could use it for design work.

For almost a century, World Land Speed Record Cars have been designed using the technologies of their day – i.e. drawing boards, slide rules, hand computations and (in some cases) wind tunnels. By the beginning of the 1990’s electronic computers had taken hold. Thus:

Distance versus time: the land speed record through history