One of the UK's top zoologists is leading an effort to develop a flapping wing military drone inspired by the natural world's most accomplished aviator. Jon Excell reports.

In one of the key scenes from the 2015 thriller Eye in the Sky, British spies gather vital intelligence on suspected suicide bombers by flying a tiny robot insect into the heart of a terrorist compound.

It’s a compelling illustration of a capability that, as far as we know, doesn’t yet exist. And it’s a vision that a team of UK engineers and scientists now hope to make a reality through the development of a small surveillance drone that mimics the behaviour of one of nature’s most accomplished aviators: the dragonfly.

Over the past year Oxford University spin-out Animal Dynamics has been working on the development of Skeeter, a tiny flapping winged drone specially designed for covert surveillance. Weighing no more than 30g, and designed to cost less and fly for longer than other hand-launched drones, it could, its creators claim, help reshape urban warfare.

With a DSTL-funded concept study under its belt, the firm has now been awarded additional DSTL funding, as well as support through the MoD’s recently launched Innovation Initiative, to develop a fully functioning prototype that it claims could be ready to fly within 18 months.

Dragonflies are fantastic. About a quarter of them migrate from Africa to here in a single individual continuous flight. That’s an astonishing flight performance

Established to exploit some of the incredible technical solutions provided by the evolutionary process, the firm’s technical pedigree comes from its chief science officer, Oxford University biomechanicist Prof Adrian Thomas.

A world-leading expert on animal movement, Thomas – who wrote a seminal paper on dragonflies back in 2004 – has something of a soft spot for the insects. “Dragonflies are fantastic,” he enthused. “About a quarter of them migrate from Africa to here in a single individual continuous flight. That’s an astonishing flight performance.”

What’s more, thanks to an airframe that’s been optimised over hundreds of millions of years, they’re also capable of incredible accuracy. For instance, the darter dragonfly – a common sight throughout in the UK in the summer – catches prey on around 90 per cent of its flights. “If you look at Patriot missiles more than 90 per cent of the time they fail to hit the target,” said Thomas, “so there’s obviously something special in the airframe.”

One of the keys to the insect’s aerial ability is the fact that it has independent muscles on each of its wings, allowing for greater bursts of acceleration, and more nimble manoeuvring than most other flying creatures. “They can flap them all independently and turn the flapping on and off,” said Thomas. “They can even choose to glide if they want to.”

He added that compared to birds or two-winged insects  – where the length of the stroke, and angles and twist of the wing all have a bearing on flight – dragonflies also have a relatively simple control system.

All of this makes them the a great model for a miniature drone and Thomas is confident that he’ll be able to provide the MoD with a device that replicates the efficiency, agility and accuracy of this creature. “We need to be able to exceed the performance of dragonflies on every measure,” he said. “We’ve got carbon fibre and man-made motors, and we’ve managed to be an order of magnitude better in the wings and motors – we should be able to do it.” 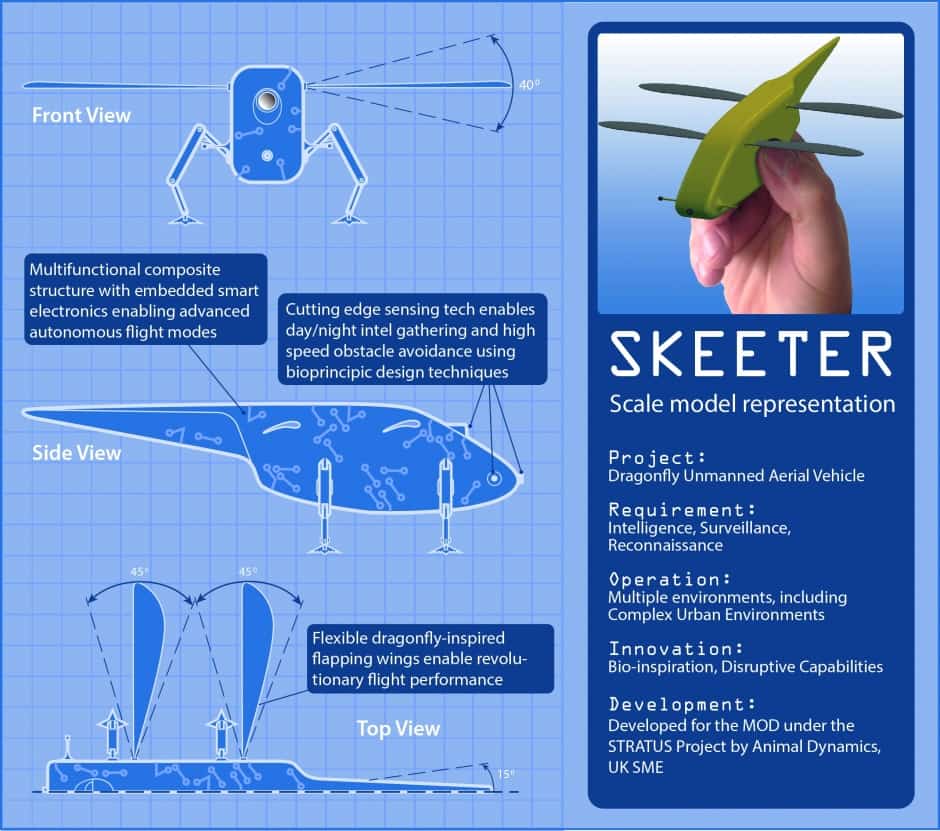 At the end of the expected 18-month development time, the firm hopes to be able to demonstrate a vehicle with what Thomas enigmatically describes as a “militarily useful” flying time. For reference, the Black Hornet, a helicopter-based micro-UAV that’s currently used by British forces, is reportedly able to stay aloft for around 25 minutes.

Designed to be operated remotely, the vehicle will also be equipped with a level of autonomy that will enable it to perform manoeuvres such as hovering and following walls: thereby enabling it to continue operating in GPS-denied environments. Thomas added that it will offer considerable advantages over helicopter, or quad-copter based devices, which are far more prone to being buffeted by gusts of wind.

There’s no spare mass....if we save a bit of weight in sensors, that immediately goes into the battery

The final device will come in at just under 30g with the payload, which is also being developed by Animal Dynamics, accounting for approximately half of this weight. “On something of this scale everything has to have at least three uses so everything has to be integrated,” he explained. “There’s no spare mass. For example, if we save a bit of weight in sensors, that immediately goes into the battery to get a bit more lifespan.” The weight has been further reduced by design of the wings: exceptionally lightweight and durable structures made from individual carbon-fibre strands covered by a polymer membrane.

As well as weight, the team is also focused on cost, and wherever possible is making use of COTS (commercial off-the-shelf) components. The most obvious example of this is in the batteries, where continued improvements driven by the mobile-phone industry have helped deliver power densities the team could only dream of 12 months ago.

Perhaps the most critical innovation, said Thomas, is the development of an exceptionally high power-to-weight ratio motor. And although he wouldn’t be drawn on the finer details, he believes the system the team has developed could have a host of lucrative applications beyond the military realm. “We’ve got options that will work well on electric cars, we’ve got beautiful options that will work well as pumps, and really nice systems for driving anything where you need a really efficient very smooth constant force drive at a constant rate.”

The firm’s CEO Alex Caccia, declined to comment on the exact price of the system, but said he expects it to be considerably less than the Black Hornet (as previously reported by The Engineer, the MoD paid around £20m for just 160 units). “We’ve been building this from the start with COTS components with the intention of mass production so we’re hoping we can get them down to a small enough cost where the military will use swarms of them.”

For the moment the focus is firmly on the military applications for the technology, but in the longer term Thomas thinks that cracking the challenge of building military micro-drone could open the door to a host of other applications.

“I think there’s a good chance we could scale this up and provide a nice delivery-drone solution that is much more friendly and safe as a thing interacting with the person it’s delivering too – much less likely to chop their arms up. Also – if it fails it will glide.”

In parallel with Skeeter project, Thomas and Caccia have been gearing up for a crack at the human-powered water-speed record using a boat equipped with a flapping propulsion system. It’s an approach to marine propulsion that Thomas claims has huge advantages over the incumbent technology. “With propellers the tips go too fast and the root goes too slow. At one particular speed it’s correct and really efficient, but over a broad range of performance there’s no doubt whatsoever that flapping-tail propulsion is more efficient. If you want something that’s capable of going slowly and capable of going fast, and is efficient over all that we’re using the wrong solution. Thomas hopes that the attempt on the record (which currently stands at 18 knots) will raise the profile of the technology. Flapping propulsion also has potential as a more ecologically friendly form of marine power generation, he added. “One of the nice things about a flapping foil-based hydropower generator is that the gearing’s really high so the foil moves quite slowly – slower than fish and other marine life – so it’s ecologically quite sound.”