According to the Federation of American Scientists, early in the 21st century the retired educationalist Julie Schletter was writing a book about her father. While there is no record of the late Schletter’s manuscript being published, its prolix working title is extraordinary in that it contains three plot spoilers and a terrible pun. A point in its favour is that the reader would have been left in no about the author’s intentions. It was called simply: Accordion to Willy: A Personal History of William Higinbotham the Man who Helped Build the Atom Bomb, Launched the Federation of American Scientists and Invented the First Video Game.

If the extracts from the unpublished letters that were slated for inclusion are indicative of the quality of Schletter’s research, her biography would have been of huge value to historians of technology and the Second World War. Light is cast on the whimsical musical wordplay in Higinbotham’s memoirs, in which he describes his arrival at Washington DC in late 1945: “Then came Hiroshima, Nagasaki and the Japanese surrender. We had a big party the night the surrender was announced. I sat on the hood of a jeep, playing my accordion, as we paraded around town. Immediately after that, the discussions began in earnest.” These discussions would lead to the global understanding of the word non-proliferation.

William Alfred Higinbotham was born in Bridgeport, Connecticut, USA on 25 October 1910. Apart from the fact that he was brought up in a religious environment by First Presbyterian minister the Reverend Robert G Higinbotham and his wife Dorothea, little is known of young Willy’s childhood. In an interview in 1980, he revealed his interest in science started at the age of 14, when he tinkered with radio sets, trying to pick up the frequency transmissions of the first commercial stations. At 16, he enrolled in a high school physics class and quickly discovered that he had a natural affinity for the subject, leading to his undergraduate degree in physics at Williams College, Massachusetts in 1932, before progressing to Cornell University. To avoid almost inevitably becoming unemployment due to the Great Depression in America, Higinbotham opted to continue his academic career. He soon discovered that his impoverished finances meant that he was forced to take on extra work as a technician in the physics department to pay for his accommodation and tuition: “This proved to be a lifesaver. I discovered I was very good at electronics.”

In 1941 Higinbotham joined the Massachusetts Institute of Technology’s Radiation Laboratory, where he worked on radar devices at the invitation of experimental physicist Robert Fox Bacher. According to the IEEE Annals of the History of Computing, “during this time, analog computers were being developed and adapted for military initiatives, particularly for simulations as a cost-saving measure by the US government. Higinbotham designed displays using cathode-ray tubes (CRTs) and gained experience converting transmitters and displays from airborne radars for use in antisubmarine activities.” In 1943 Bacher recruited Higinbotham once more, this time to Los Alamos National Laboratory in New Mexico where he was appointed for work on a classified military assignment that was “researching and developing design components for the first atomic bomb as part of the Manhattan District Project,” later to be known simply as the Manhattan Project.

Higinbotham had ethical misgivings about working on weapons technology, but accepted the post in the belief that his involvement would contribute to ending the war. On 16 July 1945 he watched the test denotation of the first atomic bomb at Alamogordo, New Mexico, which had been given the code name Trinity by director J. Robert Oppenheimer. A matter of a few short weeks later, on 6 August 1945 a bomb was dropped over Hiroshima and on 9 August 1945 at Nagasaki. Alamogordo, along with photography of the destruction in Japan, left its emotional mark on the scientist who had already lost two brothers during the war.

Higinbotham became committed to nuclear non-proliferation and was – along with several other scientists who had worked on the bomb programme – eager to share his convictions. On 1 November 1945 the Federation of Atomic Scientists was formed, later to be renamed the Federation of American Scientists (FAS), with Higinbotham as its first chairman and executive secretary. The History of Computing takes up the story: “FAS activities included lobbying, presenting educational lectures, producing the Bulletin of Atomic Scientists, and testifying at official government hearings. Major successes of the FAS were the defeat of the May-Johnson Bill, which would have given the military control of nuclear research, and the passage of the McMahon/Atomic Energy Act of 1945, which established the US Atomic Energy Commission (predecessor of the US Department of Energy), a civilian commission under which atomic energy policy and nuclear power development was managed.”

After the war, Higinbotham’s life was to centre on his association with Brookhaven National Laboratory (BNL) that had been founded by the Atomic Energy Commission with the responsible and peaceful application of nuclear power as its central philosophy. In December 1947 he took up a position working with experimental nuclear electronic instrumentation, expressing that BNL “looked like the best place for me for what I wanted to do. I wanted to be involved in instruments and also be at an institution that wouldn’t complain if I continued to be active in arms control.” By the end of 1948 he had been promoted several times and was awarded tenure. In mid 1949 he married Julie Ann Burritt, settled in Bellport, New York, and had three children: Julie (who would go on to draft her father’s biography), Robin and William B. He was appointed the division head of the Instrumentation and Health Physics Department in 1952, a rank he would hold for 17 years. His division was responsible for the electronics used in Brookhaven’s particle accelerators and research reactors, and conducted pioneering work on digital computers. 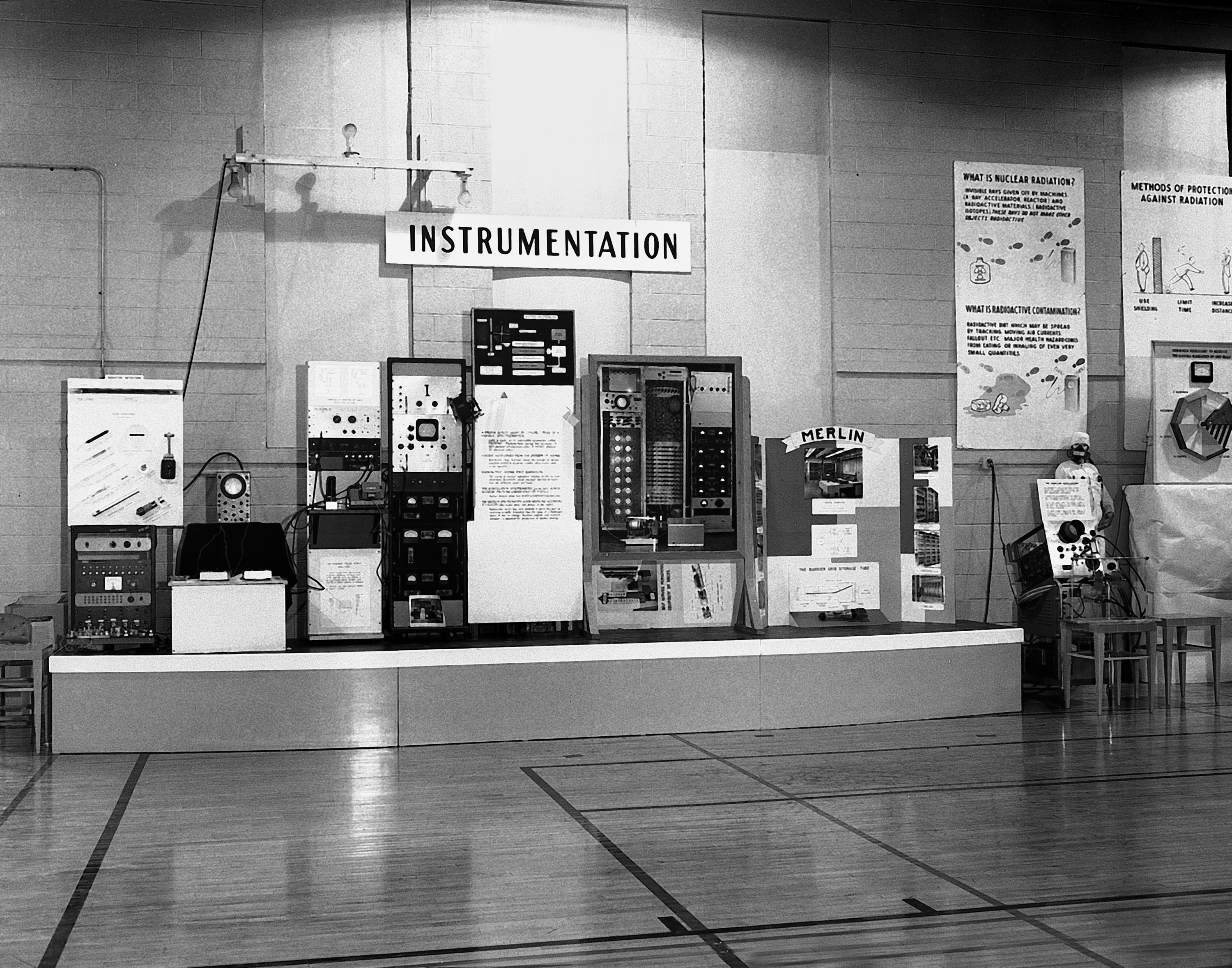 Apart from devoting his post-war career to being an advocate for nuclear arms control, the accordion-playing scientist seems to have had a less serious side to his personality. After reading an instruction manual that accompanied a Systron-Donner analog computer, Higinbotham designed Tennis for Two, the first analog computer game to display motion and allow interactive control with handheld controllers. “It took me about two hours to rough out the design and a couple of weeks to get it debugged and working,” he said in an interview in 1983. “It didn’t take long and it was a big hit.”

It was also the first graphics-based game to be played by the public. This took place at Brookhaven’s 1958 open house event where, according to BNL physicist Peter Takacs, people “lined up out the door of the gymnasium where it happened to be set up.’’ It was such a success that Higinbotham developed an upgrade for the 1959 visitors’ day that allowed gravity level settings to be adjusted to simulate the experience of playing tennis on Jupiter or the Moon. A year later, the program now regarded by computer game historians as Pong’s ancestor was dismantled because Higinbotham thought it unlikely that anyone would want to spend time “twisting the dials on the rheostats to play this two-dimension form of tennis.’’ Although he was to file 20 electronic circuit patents, Higinbotham did not seek to protect Tennis for Two because “it wasn’t something that the Government was interested in” and as a result “didn’t think it worth it.” This latter statement was based on his observation that while “many of people played this game at Brookhaven National Laboratory in 1958 and 1959, it received no publicity then, and it only began to attract attention in the 1970s, when video games became big business.’’

According to his obituary in the New York Times: “Mr. Higinbotham spent 47 years at Brookhaven, from 1947 until his retirement in 1984 as a senior physicist, then served as a consultant until his death” a decade later. During this time he remained indifferent about computer entertainment. Despite being given the honorific ‘grandfather of video games’ by David Ahl (who recalls playing Tennis for Two at Brookhaven as a teenager), later in life Higinbotham was to reflect that: “I’m not very good at the new video games – my daughter beats the heck out of me.” Meanwhile, his son William B Higinbotham has actively tried to reroute interest in his father’s career in the direction of his work with the Federation of American Scientists and Brookhaven, saying: “It is imperative that you include information on his nuclear non-proliferation work. That was what he wanted to be remembered for.”