Beatrice Shilling’s engineering fix to a major design flaw in World War Two Hurricane and Spitfire fighter plane engines contributed to the eventual outcome of the Battle of Britain. Written by Nick Smith 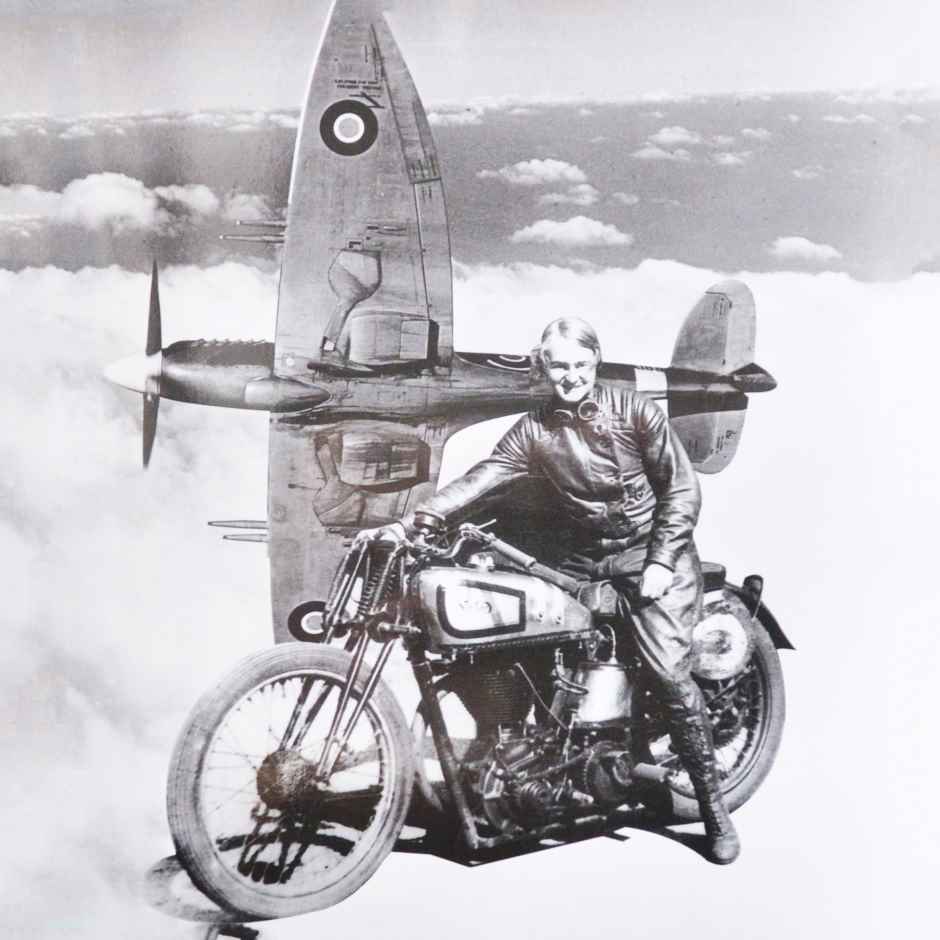 It was only a brass washer in the shape of a thimble. But it stopped Britain’s Merlin engine carburettors flooding in temporary negative-g manoeuvres such as a nosedive or inverted flight. While the RAF toiled over a long-term solution to their engines cutting out in combat, an engineer by the name of Beatrice Shilling pulled a rabbit out of the hat in the form of an ingenious workaround. Her ‘RAE Restrictor’ had been designed to allow just enough fuel to maintain power while preventing flooding, and crucially, the device could be fitted without removing planes from operation. RAF pilots referred to the innovation as ‘Mrs Shilling’s Orifice’, a ribaldry that has amused engineering students of a certain mindset for more than half a century. Saddled with the unflattering nickname of Tilly – ‘tillies’ were ‘utilitarian’ vehicles used in the armed forces – Shilling rose above the inevitable sexism that accompanied women engineers in a male dominated profession, not only to do her bit for the war effort, but also to become a ‘flaming pathfinder of Women’s Lib’, as well as a leading motorbike racer (and one of the few women to be awarded the Brooklands Gold Star).

Daughter of a butcher, Beatrice Shilling was born in Waterlooville in Hampshire in 1909, but grew up for the most part in Surrey where, as a child she, “played with Meccano. I spent my pocket money on penknives, an adjustable spanner, a glue pot and other simple hand tools.” From an early age she displayed a passion for mechanical engineering, and by the time she was 14 years old she was the proud owner of her first motorcycle, which she maintained herself. On leaving secondary school at the age of 17 she was apprenticed to an electrical engineer in Devon, a career move considered at the time to be ‘something of a rarity for a young woman,’ although her employer was the highly influential Margaret Partridge, a founder member of the Women’s Engineering Society.

During her three years with Partridge, Shilling was encouraged to pursue her engineering education at tertiary level and went up to Victoria University of Manchester to read for a degree in electrical engineering (where she was one of only two women taking the course). Graduating in 1932, she continued her academic studies, following her bachelor’s degree with a master’s in mechanical engineering. Finding herself on the job market during Britain’s most profound economic depression of the twentieth century, Shilling struggled to find employment before settling on a position as a research assistant at the University of Birmingham, where she assisted Professor G F Mucklow in investigating supercharged single-cylinder engines.

By 1936 Shilling was working for the Royal Aircraft Establishment (RAE) in Farnborough, starting her stint with the research and development organisation (where she would remain until her retirement in 1969) as a technical author for the Air Ministry’s publications department. On the outbreak of the Second World War, she was promoted into the post of technical officer (later to principal technical officer) with responsibility for carburettor R&D. Although she was to work on many wartime projects at RAE, it was to be Shilling’s restrictor component – literally a ‘stop-gap’ solution – that would cause her name to be written large in the history of pioneering women engineers.

The flooding (and fuel starvation) problem that the restrictor came to solve was identified in 1940, when Royal Air Force pilots in both the Battle of France and the Battle of Britain experienced engine stalling under certain combat conditions. And although both legendary single-seat fighters – the Supermarine Spitfire and the Hawker Hurricane – were essentially aircraft built around the Rolls-Royce Merlin engine, the engine itself was in a state of continuous improvement even when in war service, with rapidly-applied developments brought in to strengthen its performance and durability. While the Merlin design used the carburettor to create the appropriate air-fuel ratio in order to generate high specific power output, this technology initially put both the Spitfire and the Hurricane at a disadvantage when in combat with counterpart Luftwaffe aircraft that were powered by direct fuel injected engines. This meant that German fighters (such as the Messerschmitt Bf 109 and the Focke-Wulf Fw 190) could evade pursuit by flying in a negative-g manoeuvres (such as in inverted attitude) that the British planes were unable to follow. Knowing that their aircraft would stall of they went into a steep nosedive or flew upside-down, to avoid cut-out British pilots typically were restricted to ‘half-rolls’ that kept the fuel at the bottom of the tank.

By March 1941, Shilling was touring RAF fighter stations installing her deceptively simple innovation that, according to Matthew Freudenberg in Negative Gravity: A Life of Beatrice Shilling, was immensely popular with British pilots as it restored Flight Command’s competitive advantage in combat. It has passed into legend that it was the mathematician and engineer with responsibility for Merlin superchargers at Roll-Royce, Sir Stanley Hooker (later of Hawker Siddley Harrier fame), who coined the jocular nickname ‘Mrs Shilling’s orifice’ for the flow-restricting washer that was to remain in place until the advent of a redesigned pressure carburettor fuel metering system in 1943. As the pressure carburettor’s operation is unaffected by gravity, Merlin engines fitted with the new technology could now operate reliably in terms of fuel delivery in any flight attitude, meaning that Shilling’s ingenuity had served its purpose and was becoming obsolete.

With the war over in 1945 Shilling still played an important role at RAE where she continued with engine components research before moving to the mechanical engineering department, where she investigated problems of heat transfer, working on projects such as the Blue Streak intermediate-range ballistic missile (IRBM) that was intended to maintain an independent British nuclear deterrent. According to her entry in International Women in Science, she played a part in, “looking into problems such as wet runways and their effect on braking. She also worked on supersonic aircraft and rocket propulsion.” In 1956, Shilling (under her married name of Naylor) joined the Institution of Mechanical Engineers as associate member, citing her contribution to the RAE Restrictor in support of her application. She is recorded as having worked on the British bobsled team’s sled ahead of the 1968 Grenoble Winter Olympics. In 1969 she was awarded an honorary doctorate from the University of Surrey.

Shilling was from her childhood interested in motorcycles, and by the 1930s she was one of the few women racers to compete at the Brooklands circuit at the time. Up until 1939 she rode a Norton M30 that she looked after and modified herself. According to one expert at vintagenorton.com, with something of an engineering irony given her professional aero-engineering expertise, photographic evidence suggests that Shilling’s fuel tank did “not seem to fit properly.’ Notwithstanding, in 1934 she was able to lap Brooklands at 106mph (170kph), making her the second woman to earn the British Motorcycle Racing Club’s Gold Star for plus-100mph laps.

As a child I played with Meccano

This award may have played a part in Shilling’s private life, as there is an irresistible (though almost certainly apocryphal) anecdote that tells the story of how she refused her suitor’s proposal of marriage until he had also received the award. Given that her colleague at the RAE, mathematical test mechanic and fellow motorcyclist George Naylor received his star in 1938 and that the couple were married in September of the same year, the tale has some credibility (though not as much as his war record, which saw Naylor serve as a bomber pilot with No.625 Squadron RAF, where he reached the rank of Flight Lieutenant and was awarded the Distinguished Flying Cross.)

After the war Mr and Mrs Shilling continued to race, only this time in cars which they tinkered with and tuned in matrimonial harmony in their home workshop. In the early 1960s they raced an Austin-Healey Sebring Sprite, often at the Goodwood circuit, being placed several times and recording one outright win. George’s racing career evolved into something more serious, while in 1967 Beatrice was asked to provide engineering assistance to American racing driver Dan Gurney in order to solve overheating problems with his Eagle Mk1 Formula 1 racing car.

Shilling died in 1990 of spinal cancer leaving a legacy that significantly outweighs her engineering contribution to the war effort. Today, she is seen as an icon of women’s engineering, and in the 21st century there has been a brace of commemorative plaques unveiled in her honour, as well as a Wetherspoons pub, appropriately in Farnborough – ‘The Tilly Shilling’ – named after her.