Moving at a good CLIP

To watch a demonstration of the latest ‘breakthrough’ additive manufacturing technology is to invite a reasonable doubt: could this be an elaborate April Fools? Before your very eyes a geodesic sphere is drawn magically from a pool of resin, like the sword from the stone, in one smooth motion. It is indeed April 1, the commercial launch date of the M1, an additive manufacturing machine made by Carbon, a startup company based in Redwood City, California.

As the last few drops of resin fall away from the sphere, we are told it has the mechanical properties and the surface finish of an injection-moulded part, but is far too complicated to be injection moulded. So how is it done? What’s the catch? There is no part handling, no re-dipping, no repetition or layering of any kind. It looks like a miracle. 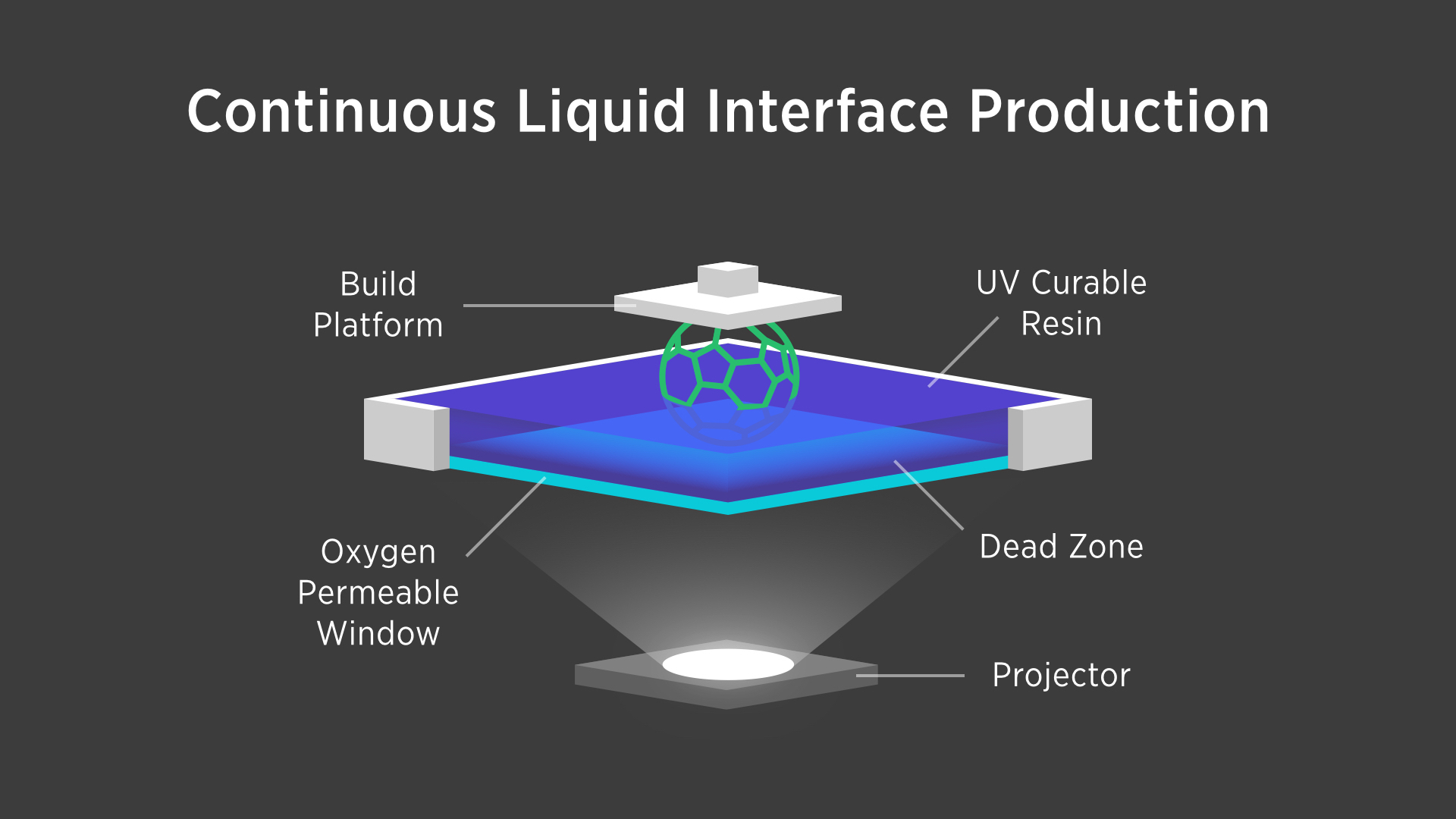 According to Kirk Phelps, vice president of product management at Carbon, this is continuous liquid interface production (CLIP) in action.

Early adopters of this new technology include Ford, BMW and Johnson & Johnson. It is the product of a brand new approach to additive manufacturing, which combines innovation in hardware, software and chemistry. The launch of the M1 includes seven engineering-grade proprietary materials, which Carbon says enables the production of parts with the mechanical properties of a final part.

ALM on its own, however, is generally considered to be far from maturity and not a reliable means of making end use parts, mainly because there are few established standards by which ALM-made parts can be validated.

But this gap between prototyping and manufacturing was the inspiration for Carbon’s founder and CEO, Joseph DeSimone, who decided to look for a new approach to 3D printing.

As a professor of chemistry at the University of North Carolina, DeSimone was working with a post-doctorate student on a project to reduce the costs of 3D printing.

“While they were looking at 3D printing patents for part of their research project, Joe realized that no one was really trying to innovate 3D printing in a new way. Eventually, Joe, with the help of his son, Phil, built a prototype for the CLIP technology in their garage, and realized how truly impactful their product, which combined hardware, software, and chemistry, could be on the world of manufacturing,” said Phelps.

CLIP differs to other forms of ALM by making parts in a single continuous process, rather than by building in layers, an approach which improves the mechanical properties of the final piece and the quality of its surface finish.

A continuous sequence of UV images, generated by a digital light processing unit, are projected through an oxygen-permeable, UV-transparent window, below a liquid resin bath. The oxygen that makes it through the window is enough to prevent the resin from curing directly onto the window itself, maintaining a continuous layer of liquid beneath the growing part. Above this ‘dead zone’, the curing part is continuously drawn out of the resin bath creating suction that draws in more reactive liquid resin to the UV light.

“By carefully balancing the interaction of UV light, which triggers photo-polymerization, and oxygen, which inhibits the reaction, CLIP continuously grows objects from a pool. This continual process is fundamentally different from traditional bottom-up printers where UV exposure, resin renewal, and part movement must be conducted in separate steps which results in the layered nature of the parts,” said Phelps.

The process enables the creation of complicated geometrical shapes in a relatively short period of time, sometimes quoted as between 25 and 100 times faster than other ALM methods. In one of the first demonstrations, given as part of a TED talk by DeSimone, CLIP produced the geodesic sphere of injection-mould quality in a matter of a few minutes.

Carbon says that CLIP has also opened up the range of materials available for 3D printing.

“Traditional manufacturing processes have a lot of limitations when it comes to design and material availability. We want to open up the opportunity for these creators to think beyond those limitations. Our process employs a huge range of polymeric materials to facilitate the production of final quality parts,” said Phelps.

“We can leverage the whole polymer family to address specific application requirements.  Our work with elastomers, for example, covers a broad range of needs – from high elasticity for athletic shoes to damping properties for vibration control in automotive applications.”

“Our polyurethane materials are extremely versatile and can be tuned to achieve desired mechanical properties. At Carbon, we’ve developed novel classes of thermoset polyurethanes, which are designed to meet common engineering requirements. This makes a range of features and applications possible for industries as varied as automotive, medical and consumer electronics,” said Phelps.

“Flexible Polyurethane is a semi-rigid material with good impact, abrasion and fatigue resistance. This versatile material was designed for applications that require the durability to withstand repetitive stresses such as hinging mechanisms and environmental resistance.”

Phelps said the elastomeric polyurethane could only be used with CLIP and was the only additive manufacturing material with true elastomeric behaviour. “It is useful for demanding applications where high elasticity, impact and tear resistance are needed. We are continuously striving to push the boundaries of chemistry and physics to improve the mechanical properties of our advanced materials and the functionality of customers’ creations.”

Customers include BMW and Ford, which used an early release of the M1 machine to make elastomer grommets for the Focus Electric and to evaluate designs for a damping bumper part on the Ford Transit Connect.

Designers also used the process to solve a problem that concerned the oil filler cap on the V8 engine.  The team was able to rapidly design, prototype and manufacture an oil connector using rigid polyurethane and elastomer materials to access the oil fill tube without needing major redesigns to several components of the vehicle.

Ford said it used CLIP to make parts in a fraction of the time it would have taken using conventional methods and with material properties much closer to the final properties desired for the part.

Medical supplies giant Johnson & Johnson is also collaborating with Carbon to produce surgical devices. While medical 3D printing is still in its infancy, the partnership is seen as a major step for the adoption of the technology.

Phelps said the company believes it is now on the path towards making ‘3D manufacturing’ a reality.

“The 3D printing industry has been relegated to fit prototyping for years. We have developed technology that can address fit and functional prototyping as well as low-volume manufacturing. Our groundbreaking materials and the gentle nature of the CLIP process allow for the production of final parts.

“For the first time, product designers and engineers can produce parts that have the resolution, surface finish and mechanical properties required for both functional prototyping and production-quality parts.”

The M1 is also able to collect process control data, which makes it possible for Carbon to provide remote diagnostics, assist with print optimization, and improve print quality over time, said Phelps.

“An internet-connected architecture ensures the latest features, performance enhancements and resins are always available to users, while the browser-based interface enables printer operation inside a network without the hassle of software installs or compatibility problems.”

Sensor integration is a good fit with 3D-printed prosthetics