Promoted content: On the road towards zero emissions with Schaeffler

Governments around the world are pursuing more stringent emission control regulations to continually improve air quality in urban areas. The European Union, for example, since September 1, 2017, has required Real Driving Emissions (RDE) tests measuring emissions in real-world traffic and no longer merely on test benches. China on the other hand is planning to establish fixed quotas for electric vehicles with zero local emissions.

The technologies needed to meet these requirements are available. Schaeffler already has several production orders for its very compact and powerful electric drive systems. At the same time, there is a need to design future internal combustion (IC) engines for even greater efficiency and lower emissions.

Looking forward, Schaeffler anticipates electrified powertrains for vehicles to continually increase over the next few years. By 2030, as much as 30 per cent of all newly produced cars could be using all-electric traction systems. In this case, only 30 per cent would exclusively be equipped with an internal combustion engine and 40 per cent would have a hybrid powertrain. Even in this extreme scenario, two in three new vehicles would still have an IC engine on board.

The dynamic timing of the engine’s valves is an important influencing variable. The reason is that a major proportion of total emissions is produced in acceleration phases. Engine designers can effectively counter this by short-term adjustment of the opening and closing times of the intake valves through which air and recirculated exhaust gas flow into the cylinder. To enable fast adjustment even in dynamic driving modes, Schaeffler has developed an electric camshaft adjuster and successfully introduced it into volume production.

Using electromechanical technology, it is now possible to adjust the camshaft at a crankshaft angular velocity of 600 to 800 degrees per second. This adjustment is even possible in the opposite direction of the engine’s rotation. The hydraulic systems that have been widely used so far are slower by a factor of two to ten, depending on engine speed and temperature.

Greater variability, less consumption and lower emissions: these advantages are also provided by systems that shut off one or more cylinders in low-load driving conditions. As a result, the cylinders that remain active operate in a more efficient load range. The hydraulic-switchable valve tappet developed by Schaeffler allows individual cylinders to be deactivated. In 2018, the first three-cylinder engine using such a system from Schaeffler went into production. A dual-mass flywheel with an integrated pendulum-type absorber – another product developed by Schaeffler – prevents negative effects by the temporary two-cylinder operation on acoustics, vibration and harshness (NVH) performance.

Today, vehicles must combine comfort, driving dynamics and suitability for everyday use with minimum environmental damage. With the “Schaeffler System 48 V” concept car, Schaeffler is pushing the boundaries of 48-volt hybridisation. While other hybrid vehicles operate with high voltages, Schaeffler uses a 48-volt onboard electrical system in this vehicle in order to make all-electric driving possible at low speeds. The drive is based around an electrified rear axle that complements the front-wheel drive internal combustion engine. An additional belt-driven starter generator is connected to the engine, which also operates at 48 volt. 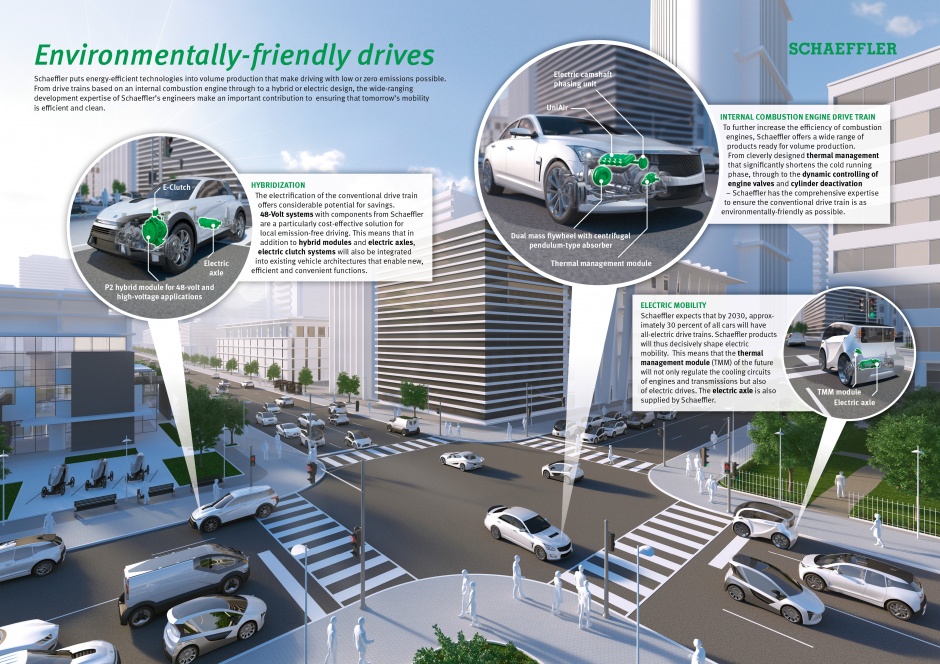 Aside from the electric axle drive for the "Schaeffler System 48 V" concept vehicle, Schaeffler has also developed other hybridisation options, such as the 48-volt hybrid module and belt drive solutions for 48-volt belt starter generators. The two-speed electric axle drive is integrated into the vehicle, ensures a high starting torque, and also allows all-electric driving.

As an alternative to the electric axle, the hybrid module can be integrated into vehicles with automatic transmissions. Schaeffler has also developed a hybrid module for vehicles with manual transmissions. An automated impulse clutch that shifts rapidly allows the implementation of a 48-volt electric motor between the internal combustion engine and the transmission. Engaging this clutch also allows the internal combustion engine to be started via the electric motor.

Electrification in the Belt Drive

Schaeffler also has a third approach: mechanical systems for belt drives in vehicles with belt starter generators. High-performance electric motors are connected to the crankshaft using a belt. This means that the internal combustion engine can be started and assisted by the electric motor during acceleration. The vibrations that occur in the belt drive are reduced by the pulley decoupler developed by Schaeffler. If the belt pulley decoupler is supplemented through the addition of an electromagnetic actuator, the starter generator can also drive the air conditioning compressor when the engine is switched off.

For a rapidly growing economy like China, global warming and increasing scarcity of fossil fuels create significant challenges for the automotive industry. The Chinese Central Government introduced ambitious regulations to push down passenger vehicle fuel consumption to 5L/100km by 2020. In light of China’s ambitious environmental targets, the "Schaeffler Efficient Future Mobility China" concept vehicle demonstrates Schaeffler’s vision and the ability of full-hybrid powertrains in the near future.

Mobility is vital for India, but it must also be affordable. Schaeffler’s "Efficient Future Mobility India" demo vehicle is based on an economical small car with a manual transmission. The vehicle integrates a selection of Schaeffler powertrain technologies that make it possible to reduce fuel consumption and CO2 emissions, while improving driving comfort.

Constant braking and pulling away are part of everyday motoring in Indian cities, and as a result, coupling and changing gear too. Schaeffler’s electronic clutch management provides significantly greater comfort at moderate cost. A small, electronically-controlled actuator takes over the driver’s footwork. Clutch actuation is carried out by an actuator, which means the clutch pedal is omitted. This leaves only the accelerator and brake pedals – a set up already familiar from vehicles with automatic transmissions.

Schaeffler is developing solutions for low-emission and locally zero-emissions driving, which are helping to significantly reduce air pollution in urban areas and greenhouse gas emissions from road transportation.

This article was supplied by Schaeffler, and originally published in The Engineer's 2019 Tech Trends digital supplement