The offshore industry faces a future where completely unmanned platforms are operated, inspected and maintained by teams of autonomous robots. Andrew Wade reports on the latest in offshore automation.

In many ways, the offshore industry is a perfect candidate for automation. Inherent dangers and remote locations make for tough working conditions, with long stints at sea taking their toll on both body and mind. Recruitment has become difficult, and the oil price collapse of 2014 helped further erode an already ageing workforce. While prices have recently recovered, the lean years in between prompted investment in robotics, as big oil was forced to pursue efficiencies and prepare for a more uncertain future. With automation technology becoming more prolific, the industry now stands on the verge of fully unmanned platforms.

“For millennials – although it’s hard to generalise – going to work offshore in return for lots of money isn’t necessarily what they want to spend their life doing,” Prof David Lane, from Heriot-Watt University, told The Engineer.

“Oil companies do have a long-term view that they would like to have fewer people offshore. Basically, if they could get to all-robotic inspection, repair and maintenance, they’d love it. If you could make it reliable for people back on ‘the beach’, as they call it, back on dry land, that reduces cost, it reduces risk and it also helps them with recruitment.”

As well as heading up the Edinburgh Centre for Robotics, Lane is also the director of ORCA (Offshore Robotics for Certification of Assets), a nascent research consortium exploring robotics and AI for the offshore sector. Backed by EPSRC, the group brings together five universities (Heriot-Watt, Edinburgh, Imperial College London, Oxford and Liverpool) alongside more than 30 industrial partners. Its goal is to build certified assets that can further de-risk the offshore environment, licensing out the technology it develops or bringing it to market through in-house start-ups. “The overall objective actually isn’t about robotics, it’s about asset integrity management,” said Lane. “It’s about being able to do more opportunistic inspection.” 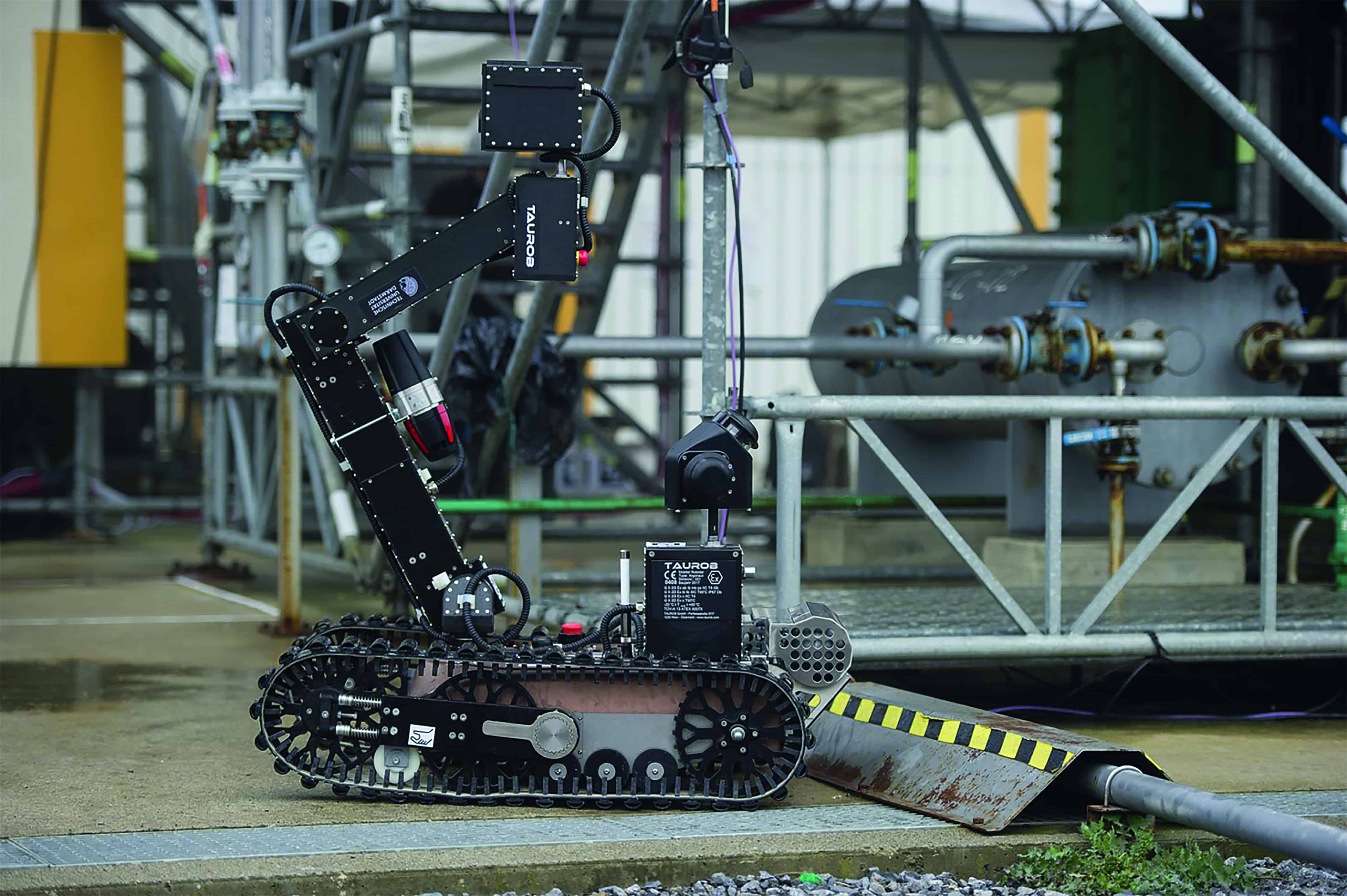 ARGONAUT, which will initially be deployed by Total on its Shetland gas plant

Robots for subsea inspection and survey have been prominent in the oil and gas sector for several decades. Autonomous underwater vehicles (AUVs) and remotely operated vehicles (ROVs) dominate these missions. Exciting advances continue to be made here, with more agile and intelligent robots taking on increasingly complex waterborne roles. However, it’s out of the water where the biggest changes are happening. In the long term, these ‘robotic roughnecks’ will not only be able to measure and inspect, they will also be able to interact with the platform environment. “The maturity is around systems that can inspect,” said Lane, who believes interaction is the next key phase of automation. “So not just looking at things, but then starting to fix them. Being able to turn valves, for example, turn things on and off and do simple intervention tasks.”

One of the robots ORCA is working with is ANYmal, an autonomous quadruped designed for extreme environments. ANYmal weighs 30kg and can operate a 10kg sensor payload for about three hours. Its flexible joints allow it to get flat to the ground and inspect areas that other robots may find difficult to reach, as well as crawl upstairs with an incline of up to 45 degrees. A ruggedised design and IP-67 certification protect the robot from water and dust ingress. Parent company ANYbotics – spun out of ETH Zurich – is targeting the oil and gas sector in particular, where it believes quadruped robots are uniquely equipped to deal with the intricate layouts of offshore rigs.

“An offshore platform consists of complex installations of machinery which includes steps, pipes and other obstacles as well as steep stairs connecting multiple floors,” explained ANYbotics co-founder and software engineer Péter Fankhauser. “These environments are designed with humans in mind but pose a challenge for traditional robots to navigate. With a legged platform such as ANYmal, obstacles, stairs, and narrow paths can be more easily navigated.”

As with most of the new breed of offshore robots, ANYmal can operate with a high degree of autonomy, using lasers and cameras to navigate. If it gets stuck or encounters an “anomalous situation”, a human operator back onshore can step in and take control. Using a docking station, multiple robots can operate in shifts, providing round-the-clock visual, thermal, and acoustic inspection as well as gas detection. For now, intervention is limited to using its limbs to push buttons, but more advanced manipulation capabilities are planned.

“We are currently running several pilot projects both onshore and offshore and we are targeting long-term deployment of ANYmal for 2019,” said Fankhauser. “Currently, ANYmal can solve simple manipulation tasks by using its feet to, for example, push a button. However, adding additional manipulation skills is definitely on our roadmap.”

ANYmal emerged from the ARGOS (Autonomous Robot for Gas and Oil Sites) Challenge, an event set up by French energy giant Total in 2013. It challenged teams to design and build robots for routine on-platform inspection as well as emergency situations. Five international teams went head-to-head in a series of increasingly difficult tasks. Team ARGONAUTS, comprising members from Austrian robotics firm Taurob and Germany’s TU Darmstadt, was eventually named the winner in May 2017.  “They were the best in class in robustness, reliability, and also being able to transfer between the autonomous functionality and tele-operated use,” Total’s Kris Kydd told The Engineer.

Having graduated with a Masters in Electronic and Electrical Engineering from the University of Dundee, Kydd spent the best part of a decade working at Total’s UK subsidiary in Aberdeen. In 2013, he transferred to the company’s R&D headquarters in Pau, south west France, where he became head of robotics. He was later tasked with setting the parameters for the ARGOS Challenge. Now he’s spearheading the North Sea pilot scheme.

The next 18 months will see two new versions of the ARGONAUT robot deployed on Total’s Shetland gas plant, with a plan to eventually have them stationed on the company’s Alwyn North platform, 440km north-east of Aberdeen. Operating as a team, the twin bots will work in shifts, autonomously returning to a docking station when running low on power. Unlike ANYmal, ARGONAUT is tracked rather than legged, resembling a slimmed-down version of iRobot’s PackBot. Born from the same competition, it shares many of the same inspection capabilities, such as leak detection, and thermal and visual assessment.

“The sensor payload today for the routine inspection has a series of cameras on the robot body and robot head,” Kydd explained. “We have an ultrasonic microphone, an infrared gas detector, night vision capabilities, video capabilities. We’re also looking at what NDT (Non-Destructive Testing) type of sensors we can include on the robot as we move through the pilot.”

By Total’s own admission, operating in the cut and thrust of a functioning plant is a very different challenge from the staged environments of the ARGOS Challenge. For logistics purposes, the robots will cut their teeth in the relatively accessible surrounds of Shetland before being pushed to the limits in the heart of the North Sea. Robust communications are absolutely fundamental, according to Kydd. “For any wireless robotics system, if the communications infrastructure isn’t established correctly, you can forget about everything else,” he said.

Although the robots will operate autonomously, they will also have Wi-Fi and 4G LTE capability, providing flexibility for updates as well as communications redundancy. “With ARGOS, we had all of the autonomous processing done onboard the robot,” said Kydd. “What we’re looking to do is offload as much of the non-critical processing to the cloud, so the robot can run for longer.”

This also provides Total with the ability to introduce new algorithms and software updates over the air, with no need to physically interact with the robots. During the pilot, the machines will share the Alwyn North platform with more than 100 workers and – like ANYmal – their role for now is limited to inspection. Intervention capabilities will eventually come, however.

“Once we’ve proved the inspection capabilities, we want to be able to add manipulation,” said Kydd. “Taurob actually has a commercial robot, the Taurob Tracker, and that can come with a customised arm. Manipulation is something we’re going to be looking at towards the end of the 18-month period, as we move into developing future versions of the robot.”

As AI and autonomy advances, it’s inevitable that the offshore workforce will be impacted. Unsurprisingly, the industry claims jobs will simply migrate back to the safety of the shore rather than be lost altogether.

As well as developing robotics, part of Prof Lane’s remit at ORCA is to build systems where offshore AI isn’t operating in a vacuum, providing human operators back on the beach with visibility over what’s happening on increasingly automated platforms. It’s part of a subdomain known as ‘explainable AI’. Neural networks tend to be black boxes that deliver outputs without describing the process. While this may be fine for the lab, real-life applications and certification demand visibility and understanding of why something is happening.

“In some circumstances the robots are working quite autonomously, they’re making their decisions, doing relatively simple tasks,” said Lane. “But if they get into situations where tasks are a bit more complex, or they’re not quite sure about the next step, then the operator gets involved. The aim is for the human operator to understand what the robots are doing. Most of the time, for practical reasons, the human won’t be directly controlling the robot one-to-one. So we have what we call a shared autonomy interface [that shows] what plan the vehicle is executing, what stage the plan is at, what’s gone wrong, what could go wrong.”

Water-based robots are reaching a higher level of maturity. Based in Trondheim, Norway, Eelume is a start-up that evolved from the nearby Norwegian University of Science and Technology (NTNU). Its modular snakoid robot promises to revolutionise how subsea inspection, maintenance and repair (IMR) is carried out. Designed to live permanently underwater, Eelume connects to a docking station on the seabed that can potentially house teams of robots. A flexible body allows it to adopt a torpedo-like shape for travelling over distance, hitting speeds of 4-6 knots. But when operating in and around subsea infrastructure, it can twist and curve into a variety of shapes, illuminating and inspecting, as well as using a range of tools for manipulation. Arne Kjørsvik, Eelume’s CEO, says inspiration for the robot came from an unlikely source. 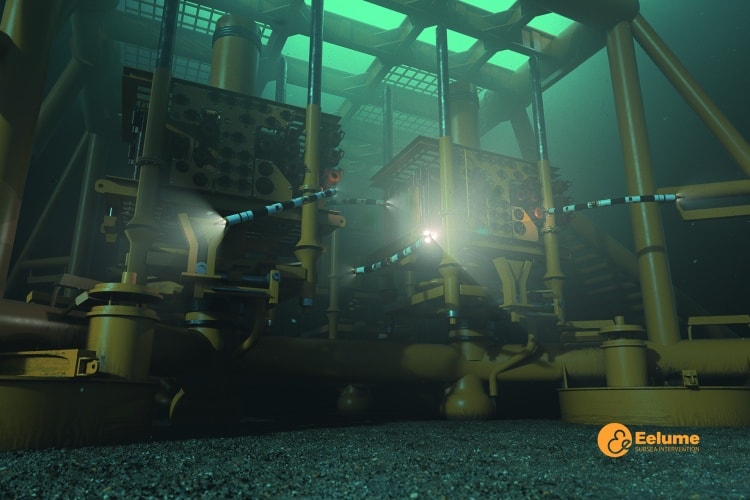 Eelume proposes that several of its robots could operate permanently underwater, docking on the seabed to recharge

“The whole idea started after several fires in the city of Trondheim in the late 1990s and early 2000s, where the concept of a controllable fire hose came up,” he told The Engineer. “So at the Department of Engineering Cybernetics at NTNU, they started to research snake robotics.”

Eelume was spun out of NTNU in 2015, and the following year it formed a strategic partnership with Statoil and Kongsberg, bringing a wealth of offshore and robotics knowledge. The robot’s different modules can provide multiple combinations of forward and lateral thrust, as well as camera and sensor suites and payload capabilities such as grabbers, torque tools, cleaning heads and sonar.

“By nature the robot is built by flexible joints and rigid sections,” said Kjørsvik. “The vehicle distinguishes from other underwater vehicles since it can change its shape, it is very slender and can access constrained areas.”

The robot could enter service in early 2019, delivering a level of offshore automation not previously seen. On-platform robots have some way to catch up, but the technology is developing rapidly.

“There are already unmanned platforms in the North Sea,” ORCA’s David Lane explained. “The thing that’s not automated is the inspection, repair and maintenance. I’d like to think that in, say 10 years, we’d be doing a lot more of the intervention autonomously. That’s possible.”

Automation nation: The robots are coming