The Edinburgh Festival is a frenetic place. Whatever sort of entertainment you could want, you’ll find it there: highbrow theatre, close-up magic, ventriloquism, alternative comedy, juggling, bagpipes — the latter two being almost impossible to avoid, no matter how much you try. This year’s festival, however, will offer something a bit different: a comedy show based on engineering. Not only that, a comedy show that takes engineering seriously.

Humans versus nature: engineering for the win is the brainchild of writer/comedian Timandra Harkness and comedian/mathematician (or, as he puts it, maths ninja) Matt Parker. It’s their second collaboration; the first, Your days are numbered: the mathematics of death premiered at Edinburgh two years ago and the duo were touring it until earlier this year.

‘Both of us really like engineering,’ Harkness explained. ‘Matt actually did part of his degree in it and I’ve never done a qualification but it’s always fascinated me. Although I love the open-endedness of science, there’s something about working with engineers whose work revolves around solving problems, whether it’s to do with flying faster, getting clean water in Africa, or reading books in daylight on electronic gadgets. Even more so because we’re so often surrounded by people who tell us we can’t do things.’

The idea behind the show, which is sponsored by the Royal Academy of Engineering, is that nature presents us with a series of obstacles to things that we, as humans, want to do, and engineers find a way around them. ‘For example, there’s gravity, so we can’t fly,’ Harkness explained. ‘For thousands of years that was that; people tried to find ways to fly like birds, and they jumped off things and broke bones. Then we tried filling a bag with a gas that seemed to float and voila — the hot-air balloon. Within two years of the first humans leaving the ground under control, someone had flown across the English Channel. Two hundred years later, we were on the moon.’

I love the open-endedness of science, but there’s something about working with engineers whose work revolves around solving problems

‘So the show is a series of themes — we start with the obstacle and look at how engineering has helped us to overcome it. Another good example is darkness — what have we done to allow us to work through the night?’

Harkness isn’t a scientist, but her entry into science comedy came thanks to an unexpected encounter. ‘I was doing my other job as a journalist, covering a meeting at the Royal Society when I noticed someone I knew from the comedy circuit, Helen Pilcher. I only knew her as a stand-up, so I went over and muttered: “Shouldn’t you be in the back room of a pub doing jokes about beer guts?” And she said: “This is my day job, I’m a stem-cell scientist.”’

Both Harkness and Pilcher were bored with their usual observational comedy material. ‘Jokes about drinking, getting dates, and cats and dogs were getting a bit stale,’ Harkness said. ‘We just thought it would be more fun to do jokes about science. So we formed a double act called Comedy Research Project and worked together for a couple of years, starting at the very first Cheltenham Science Festival, 11 years ago.’

Pilcher has a young family and is currently taking time off from comedy. Harkness’s introduction to Matt Parker came at the Cheltenham Science Festival three years ago, where Parker won the annual science communicators’ competition FameLab. They have certainly found an audience. ‘When we were last in Edinburgh we accidentally booked ourselves into a large venue — a 150-seater auditorium at the Assembly Rooms, which is one of the major venues on the Festival Fringe,’ she said. ‘That’s a massive venue for an unknown act; we were wondering whether we could curtain some of it off. But we averaged just over 100 people — and that was for a morning show. We were staggered.’

There is certainly a growing trend of science- or technology-based comedy. Probably the best-known practitioner is Robin Ince, whose Radio 4 series with Prof Brian Cox, The infinite monkey cage, is gaining a growing audience and has also spun off into a national tour. Ince also tours a solo science show called Happiness through science, but Harkness believes it was one of his seasonal special shows that really opened the door to science-based comedy in the UK.

If we hadn’t affected nature, we’d all be dying at the age of 30, illiterate

Ince’s ‘rationalist Christmas show’, A festival of nine lessons and carols for godless people, has now been running for five years and features guests such as comedy stars Ricky Gervais and Stewart Lee, along with science communicators such as Cox, Mark Miodowdik, Simon Singh and Ben Goldacre. ‘It tapped into a much wider audience than expected,’ Harkness said. ‘Robin first did them as benefits and expected to get a couple of hundred people, and he ended up selling out multiple nights at the [3,600 capacity] Hammersmith Apollo. That really made it a much more recognisable field and it gave people more confidence that this sort of stuff could reliably pull an audience.’ Harkness and Parker’s promotor first realised that it was something to take seriously when he saw a capacity Hammersmith audience applauding an equation, Harkness said.

While much science communication in the UK seems to be aimed at children, in order to attract them into science and technology education and careers, Harkness believes it’s important to aim science-based entertainment at an adult audience. ‘It keeps it in the public discourse; as part of society, not just as something people do as a living and need to be aimed towards,’ she said. ‘But that isn’t really why I do it. I do it because it’s interesting and parts of it are really funny, and if I think so, why wouldn’t anyone else?’

Having said that, Harkness is now in the process of joining the science community in a more formal way: she’s doing an Open University maths course. ‘It got me; I got bitten by the bug,’ she says, a little ruefully. ‘I’ve become the sort of person who watches science and engineeering documentaries and goes: “Hmmm, some more numbers would be nice. Couldn’t they have put a graph in?”’

The funny thing about engineering…

Why did you call your show Humans versus nature?

We wanted to make the point that, you know what, you can’t just leave it up to nature to make everything great, because nature would have us living like animals. It takes human beings to say that we can be more than that, and technology lets us do it.

Exactly. But there’s a danger that if you go on about how terrible humans are and the dreadful effects we have on nature — even if you’re doing that in the context of how engineering can help — you’re implying that you should stop doing anything. Anything we do has an impact on nature, but that’s not necessarily a bad thing. If we hadn’t affected nature, we’d all be dying at the age of 30, illiterate, never having travelled further from the place we were born than we could walk. The possibilities the modern world has opened up for the ordinary person are tremendous, even though they’re unevenly distributed as yet.

And technology can play a big role in improving the effects of older industry on the environment.

Yes, and this is a great place to talk about that. We’re sitting in Soho; the sky’s clear, the buildings are clean, we can drink the water. One hundred and fifty years ago the Thames was thick with sewage; now there are fish in it. The streets were full of soot, the streets were covered with manure, there was a cholera epidemic. It’s down to engineering that that’s no longer true.

How did you research the show?

We both have engineer friends and contacts, and we’re not shy of asking people. The thing is, we found with Your days are numbered that if you get anything wrong or miss something out, there will be somebody in the audience who will point it out. But it is a better class of heckle.

Were there any surprises?

When I was working with Helen Pilcher, I discovered that one of her ancestors, Percy Pilcher, was a pioneer of flight. I mentioned that to my dad, and he told us that my stepmother’s grandfather worked with Pilcher, invented the epicyclic gearbox and was the co-inventor of the tank! 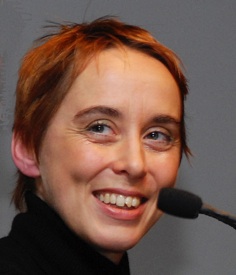 Winner of the Independent’s columnist competition in 1997, Timandra Harkness has written journalism, novels, plays and short films. She facilitates public events for the Dana Centre, the Wellcome Foundation, the British Science Association and the British Council, and is on the advisory panel for the Cheltenham Science Festival.

Humans versus nature: engineering for the win can be seen at the Edinburgh Fringe Festival, at the Assembly George Square, from 2–14 August.