The UK inventors of an innovative valve-train technology which dispenses with the traditional camshaft claim it could radically improve petrol engine performance. Jon Excell reports

Major leaps in mature technologies are relatively rare occurrences. And there are few more mature technologies in widespread use than the internal combustion engine, where gains in efficiency and performance tend to be incremental rather than earth-shattering.

But now a small automotive consultancy in Leamington Spa claims to have bucked this trend with the development of an innovative digital valve-train system that it says could ultimately improve a petrol engine’s fuel economy and reduce its emissions by as much as 20 per cent.

Camcon’s Intelligent Valve Actuation (IVA) technology, which has been under development for the past six years and has now completed rigorous dynamometer and road trials effectively digitises one of the last remaining analogue systems on a combustion engine by replacing the camshaft with valves that are opened and closed by a set of digitally controlled motors. The firm’s Chief Operating Officer Mark Gostick, who runs the company with CEO and engine veteran Roger Stone, told The Engineer that the “unprecedented” level of control the technology brings to valve timing, lift and period could breathe new life into the IC engine.

Explaining the system’s operation, Gostick said that it replaces the connection to the camshaft with a set of torque-dense electric motors that actively drive the opening and closing of each individual valve (a so-called desmodronic mechanism). This means that the system dispenses with the valve spring traditionally used to close the engine valves, which — said Gostick — significantly reduces the amount of power it needs and end enables the valves to be far more precisely controlled.

“Every other element of the combustion process — fuel and spark — have been under control for some time,” he said, “but the air charge, which is in many senses the most important, has still essentially been under analogue control.”

He added that the system has major advantages over many existing efforts to control the valve-train. “Even the best variable valve-trains are limited in the flexibility you have to open the valve at a point in time when the engine wants it rather than when the valve-train can give it to you. This system enables you to set the timing, the period, the trajectory, the shape of the valve event, and control it in real time.”

During trials of the technology Camcon worked closely worked with Jaguar Land Rover to fit the system to one its most advanced petrol engines, the 2 litre, 4 cylinder Ingenium engine. After 1000 hours of dynamometer testing the system demonstrated fuel economy improvements of 7.5 per cent, a figure which, according to a paper on the technology presented at the 2017 Aachen Colloquium, only scratches the surface of the technology’s potential.

Gostick said that these trials have demonstrate that the technology could be relatively simply applied to existing engine designs, a key point for OEMs wary of investing in new engine development programmes. “We want to show that you don’t have to develop a specific engine around this; you can graft it onto the top of an existing engine design and still get benefits,” he said.

The technology is also claimed to hold great promise for new engine designs, in particular smaller, high performing engines that could be used alongside electric motors as part of a hybrid powertrain system. “Because IVA makes an engine much more efficient, you can potentially make the engine itself smaller, further increasing the space in the engine bay, further lending itself to hybrid applications,” said Gostick. Even more space for electrification components is freed up by the fact that the system dispenses with the need for a timing chain at the front of the engine, he added. 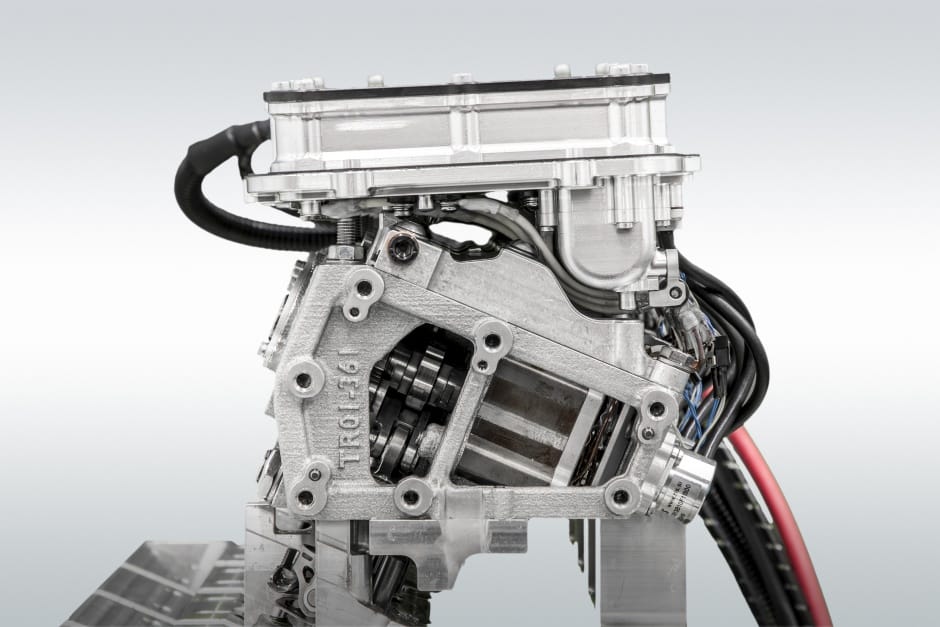 Although the concept has been under discussion for a number of years, Gostick said that it has only recently become technically feasible. This is thanks to advances in a range of underpinning technologies such as rare earth magnets that have enabled the team to build the required torque-dense motors; the emergence of electronic components able to operate in the high temperatures of an engine compartment: and, of course, fast and cheap processors. “Incremental improvements in the all the underlying technologies enables you to put them together in a system in way that hasn’t previously been possible and at a cost which can be made acceptable to the auto industry,” Gostick said.

During the trial period, which has also seen the system installed on demonstrator vehicle supplied by JLR, the team has learned many lessons about the technology’s potential.  “We’ve found we can induce air charge motion, which gives you more efficient mixing and therefore better combustion; we can reduce pumping losses because we can open the valve at the appropriate time for the appropriate amount and we can also reopen the valves — there are some combustion processes where you need to be able to inject bits of exhaust as you open the inlet valve. We’ve demonstrated that we can do those valve motions which aren’t possible with a mechanical system which still retains a link to the crank.”

To enable industry to further explore the technology’s potential, Camcon is now developing a single cylinder engine equipped with IVA to enable automotive development departments to carry out combustion research. “What we’ve got is a new tool which can start a lot of combustion development and enable you to start thinking about how you can implement some of these combustion strategies that people have known about for a long time but haven’t been able to do,” said Gostick.

In terms of commercialising the technology, he estimates that the route to production will take around five years. Alongside Jaguar Land Rover, which has supported the development of the technology, a number of OEMs and Tier 1 suppliers have also expressed an interest, he added.

If a manufacturer were to take the plunge and out the system into production, Gostick believes it has a good chance of becoming huge. “As with a lot of technologies it either does or it doesn’t,” he said. “If it does it stands a good chance of being almost ubiquitous because the impact it can have is significant across the whole IC engine."