Sparking up the stellarator

By the time you’re reading this, the world could be one step closer to clean, limitless energy. Some time in early December 2015, the Wendelstein 7-X fusion stellarator will be powered up, super-heating plasma to millions of degrees for the very first time. Known as W7-X, it is the largest stellarator ever built, a two-decade labour of love undertaken by the Max Planck Institute for Plasma Physics (IPP) at its Greifswald branch in north-east Germany.

For decades, nuclear fusion has been hyped as a potential solution to humanity’s energy needs. Replicating the same process that fuels the sun, the reactors aim to fuse hydrogen isotopes (deuterium and tritium) together to form helium, releasing huge amounts of neutron energy. Fusion in the sun takes place at extreme pressures, with temperatures of around 10 million degrees Kelvin (K). On Earth, where those pressures can’t be replicated, the temperatures required are about 100 million K. Naturally, that means a massive energy input, and current fusion reactors suck up more energy than they create. It’s a hugely promising technology, but one that remains commercially unviable, the old line being that it is always 20 years away, forever out of reach.

First conceived of in the 1950s by US physicist Lyman Spitzer, stellarators are a particular type of fusion reactor that confine the super-hot plasma using twisted magnetic fields. The premise is similar to the more well-established technology of tokamak reactors, where plasma is fired around a magnetically confined toroid, aided by an internal current. However, stellarators aim to create a natural plasma path solely using external magnets, but this requires precision engineering and calculations that can only be carried out by supercomputers.

This level of complexity is one of the main reasons stellarators lag behind tokamaks in development. But W7-X could help change all that. Its 50 non-planar and superconducting magnet coils are 3.5m high, and with their enclosure weigh about 425 metric tonnes. They are cooled using liquid helium for maximum efficiency, an intricate cryostatic system adding yet another layer of difficulty to the build. The machine also contains another 20 planar coils, as well as 254 ports. In total, construction of W7-X took over one million hours of labour. When testing began last year, it was simply a case of checking one subsystem after another, according to Dr Lutz Wegener, head of assembly on the W7-X.

“First, you need a good vacuum,” he told The Engineer. “That means thousands of welds have been made in small pipes, in big walls, in massive structures – all of them need to be helium tight. That means perfect. There is hardly access later on. So one our first challenges and first main tests was: are the vessels tight?” 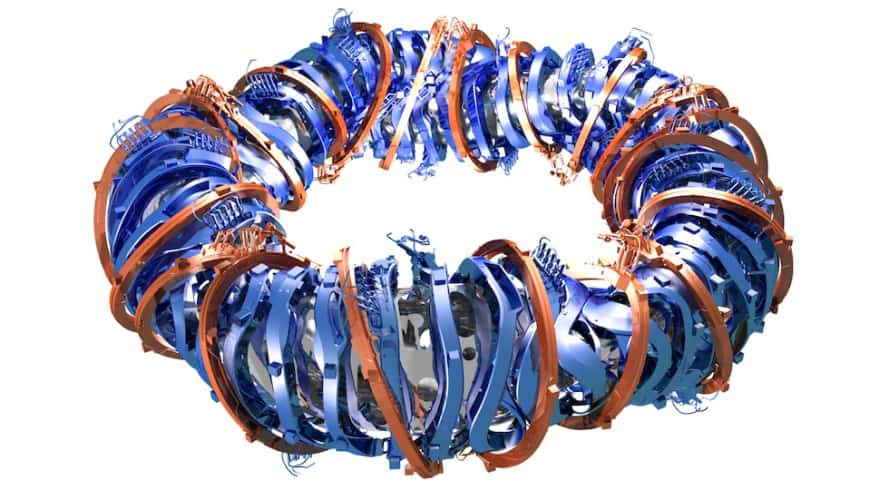 Wegener said that apart from some minor issues, these tests were all successful, with no leaks found in the sensitive interior of the device where the electromagnets are housed. The magnets themselves were then put through their paces – without the presence of any plasma, of course – and the last stages of testing on the controls and safety systems are now underway. In reality, though, the nature of these reactors means that the real testing only comes when the stellarator is powered up for its maiden plasma run. At the time of writing, this was scheduled for 10 December.

The ring formed by the contorted coils is almost sculpture-like, a swooping scientific marvel that wouldn’t look out of place competing for the Turner Prize.

As head of assembly, Wegener has been responsible for establishing build procedures on W7-X, as well as procuring tools and equipment and keeping the project on track. At the heart of the stellarator are the 50 electromagnets that guide the plasma on its journey around the 16m-long toroidal chamber. The ring formed by the contorted coils is almost sculpture-like, a swooping scientific marvel that wouldn’t look out of place competing for the Turner Prize. But the aesthetics are subsidiary to the physics, supercomputers dictating the shape and flow of the magnets so they can confine the twisting plasma with sub-millimetre accuracy.

“It’s more or less the standard (magnet) technology, if you like,” Wegener explained. “It is a neo-titanium superconductor in a coil winding package. Then the winding package is enveloped in a steel case with a certain compression to assist the load operation. The tricky thing here is every coil of the same type has to be fabricated within really low tolerance. That means the effort is enormous to create the tooling at the manufacturer’s side, to wind the coil, the process to create the coil casings, the steel pack if you like, that are supporting the winding pack during operation.

One reason behind the renewed interest in stellarators is their intrinsic stability, resulting from the pure magnetic confinement of plasma

“We use very tough steels, which is appropriate for the cryogenic operation temperature. It is hard to machine, so all our contractors who were involved in that business had to learn a lot of lessons until they were able to do all these things.”

These complicated construction processes arise from the unorthodox design of stellarators. Fusion energy is a tricky beast to begin with, but attempting it with a stellarator is like trying to ballet dance in stilettoes, another layer of complexity on top of an already complex task. To give some context, well over 200 tokamaks have been built throughout history, while only a handful of stellarators have ever been constructed.

One reason behind the renewed interest in stellarators is their intrinsic stability, resulting from the pure magnetic confinement of plasma. In contrast, the electrical current that tokamaks rely on to aid confinement can cause problems, leading to operational downtime and even destruction of the reactor. In a stellarator, the twisted magnetic field created by the magnets confines the plasma on its own, removing this threat.

“The big advantage is that no current is necessary in a stellarator, just the pure magnetic field compresses the plasma in a stable way, in a continuous way, ” said Wegener. “Running current in the plasma brings additional energy in the plasma, and the more energy you have in this instable thing, the harder it is to get it under control, or to keep it under control. In a tokamak you need a current in the plasma, otherwise you have no chance to get it confined. On the other hand, if the energy balance is disturbed, you get rid of the current immediately and all the energy goes in the walls.

“In stellarators, you have to trust the perfectly made magnet field. You have hardly got correction measures. There are some correction measures – additional coils can be added to the outside or inside of the machine, this is what we did as well. This gives you the possibility in the small range to increase the stability and to improve the quality of the magnetic field. But this is limited. Basic accuracy must be achieved under all circumstances to have this stable situation.”

The cryogenic system used to cool the device means extremely hot and cold components are often operating within close proximity. It’s vital that thermal insulation between these components is properly installed, allowing them to function within millimetres of each other.

The magnets and their cooling system have already been tested for hours at a time, but W7-X is designed to confine high-energy plasma for 30-minute stretches. When the switch is thrown in December for the initial run, only low-energy plasma will be used, as the IPP team gently eases the reactor online. Over the ensuing months, W7-X’s capabilities will be more fully explored using higher-energy plasma.

“The more tricky thing is, if you are putting more energy in, is it still stable enough?” Wegener mused. “This is a question that can be answered more in, let’s say, January and February, where there will be more time to increase the energy content a little bit.

“The most important thing is we need to complete the machine further. In the present situation the machine does not have any heat exchanger inside. Putting energy in means to some extent you have to be able to get rid of that energy; there must be a heat exchanger active to get heat out, and this is the next installation phase starting in 2016.”

While W7-X won’t solve the fusion conundrum single-handedly, it could be a breakthrough proof of concept on the path to viability, a stepping stone to clean, sustainable fusion power. Against the backdrop of global climate change, as well as a UK energy grid set to be squeezed to the limit this winter, events at Greifswald will be eagerly followed.

Although stellarators and tokamaks were first conceived of roughly around the same time, the science around the latter is much more advanced. Dr David Kingham is the CEO of UK-based Tokamak Energy, a company that specialises in compact spherical tokamak reactors. He spoke to The Engineer about the stellarator, advances in tokamak technology, and why bigger isn’t always better when it comes to fusion.

“It’s exciting this Wendelstein stellarator coming online, and it should give some interesting plasma physics results,” said Kingham. “It’s a lovely concept and beautiful physics, but the engineering of it is very challenging, so it’s difficult to see how it would ever scale to be a viable power plant.

“With tokamaks, the physics is pretty well understood. There are still some important details to sort out, but we see the devices as pretty much an engineering challenge.”

Kingham identifies three points that indicate how tokamaks are moving to this stage, where the theory is solid and the main challenges become engineering-orientated. The first is the inherent efficiency of the spherical tokamaks that are currently being developed. Making maximum use of the available magnetic field, many believe spherical tokamaks have the potential to significantly outperform previous designs. The second indicator, according to Kingham, is the adoption of a new type of magnet for plasma confinement.

“We’re able to use the technology to hold the plasma in place for 24 hours. We can go on from that point to engineer more complicated higher-field magnets from high-temperature superconductors.

“It’s a huge breakthrough for tokamaks because it not only gives higher field than possible with conventional low- temperature superconductors, it also only needs to be cooled to perhaps 20 to 30K, compared to 4K or lower. So the energy cost of cooling is much reduced, and that’s important for overall energy efficiency.”

The third indicator that Kingham points to is that tokamaks don’t have to be huge to be powerful. His colleagues at Tokamak Energy published a paper earlier this year examining the physics underpinning the reactors. It concluded that smaller devices are viable, with multiple megawatt-scale tokamaks potentially forming modular power stations capable of producing gigawatts.

“We’re aiming at 100MW devices,” said Kingham. “The challenge is to make them small enough to fit on the back of a large truck, so they could be made in a factory and transported to site, rather than being built on site… We’re firmly of the view that if you want to crack fusion power, it needs to be in much more compact devices.

The route to commercial fusion electricity by 2030