As the economic consequences of climate change begin to bite, the oil and gas sector is taking carbon capture and storage technology increasingly seriously.

As the world struggles to gain control of greenhouse gas emissions, it is slowly becoming clear that failure will be guaranteed without the large-scale use of carbon capture and storage (CCS).

Last month, the G7 set the year 2100 as the target for total decarbonisation of the global energy system. Despite strong campaigns for divestment from fossil fuels, and the growth of renewable energy, it is realistic to expect that oil, gas and coal will continue to be extracted and burnt and the emissions released into  the atmosphere for the remainder of the century. This perhaps is why researchers, policy makers and even the oil bosses themselves have recently started to talk up the need for a global effort at “mitigation”.

Mitigation means CCS: trapping the CO2 produced by power generation and other industrial processes and storing it for all time beneath the surface of the Earth in exhausted oil and gas reservoirs.

The technique of injecting liquid CO2 has been used by the oil industry for more than 40 years to assist in extraction. But over the last 18 months, CCS has been invoked again and again for its potential role in the fight against climate change; it has even been referred to as the only means left by which humanity might limit future rises in temperature  to within 2ºC, the level beyond which governments agree the effects  of global warming would be unacceptable. Last month, Ben van Beurden, Shell chief executive, called on policy makers to support the large-scale implementation of CCS. He was echoing a view put forward by the International Energy Agency and the Intergovernmental Panel on Climate Change, which said in its last assessment report that, without CCS, the cost of mitigation would double, making the 2ºC boundary unaffordable.

The question is: can CCS live up to hopes and expectations? First, there is the developing headwind to take into consideration. Public understanding of CCS is still quite weak, but there is the potential for  it to firm up into significant opposition. Anything championed by the oil industry is viewed in some quarters with outright suspicion. In particular, the movement for divestment from fossil fuels would see CCS as an industry-sponsored ruse to keep itself in business. Also, questions have been raised about cost and the long-term safety of transporting liquid CO2 and re-pressurising extinct oil and gas reservoirs. The anxieties  over fracking might easily grow to encompass CCS as well.

The next problem is that progress is slow. According to the latest survey by the Global Carbon Capture and Storage Institute, there are 22 large-scale projects around the world, but these are primarily demonstration and development ventures. A report published last year by Carbon Tracker and the Grantham Research Institute on Climate Change at  the London School of Economics said that 3,000 large-scale CCS plants would be required by 2050 to limit warming to acceptable levels.

So there is an urgent need for investment and government support  to get the ball rolling. This must be followed by the implementation of an effective carbon trading scheme to sustain CCS long term, according to the oil industry.

In Shell’s CCS demonstration projects portfolio we have several roles

“In the absence of a well-working emissions trading scheme, CCS will need capital grants to support construction and Opex support to ensure the plant with CCS operates,” a spokesman for Shell said earlier this month. “In the long term, we expect that effective carbon pricing will drive sufficient CCS deployment. What will furthermore be valuable is  a long-term signal that the technology has a role to play in achieving countries’ decarbonisation targets.”

But what is the fossil fuel sector doing to progress CCS? Shell, for example, is involved in a range of projects. “In Shell’s CCS demonstration projects portfolio we have several roles. Sometimes we are the operator  of a project; sometimes the joint venture partner. Our aim is to advance  a range of different CCS technologies and so reduce costs and optimise efficiency, over time.”

Shell and ExxonMobil are partnering with Chevron in the world’s largest CO2 storage project, associated with the Gorgon LNG field off the coast of Western Australia. The project is expected to capture three to four million tonnes of naturally occurring CO2 each year and store it in a sandstone formation around 2.5km below the ground.

Shell Cansolv, the CCS technology provider, is also involved in the Boundary Dam CCS project in Saskatchewan, Canada. A retrofitted plant is expected to capture one million tonnes of CO2 per year from one of Boundary Dam’s refurbished combustion units. The captured CO2 will be used for enhanced oil recovery.

In May 2012, Gassnova SF (a Norwegian CCS developer), Statoil ASA (a Norwegian oil and gas company), Sasol and Shell opened the Technology Centre Mongstad, which has been testing two different carbon capture technologies on a large scale, up to 100,000 tonnes  per year.

“Testing CO2 capture technologies at scale is a critical step in scaling up CCS, supporting cost reduction through learning over time, providing the opportunity to assess the relative merits of different capture technologies and obtaining valuable learning for the design and execution of large-scale commercial integrated CCS projects,” said the spokesman.

“Shell Cansolv SO2 [sulphur dioxide] and CO2 capture technologies can be used across a wide variety of industries including oil and gas, power generation and chemicals. It can be added to an existing plant  or incorporated into a new installation. There are more than 20 units licensed worldwide.”

Last week, Aberdeenshire council gave Shell planning permission  to build the onshore facilities for what would be the world’s first commercial-scale, full-chain project to demonstrate the feasibility of CCS at a gas-fired power station. The proposal is to fit CO2 capture to one of the existing gas turbines at Scottish Southern Energy’s Peterhead power station, which would trap 10–15 million tonnes over the lifetime of the project. The gas will be transported offshore by a new pipeline to Shell’s Goldeneye platform and then injected into the gas reservoir 2.5km down. 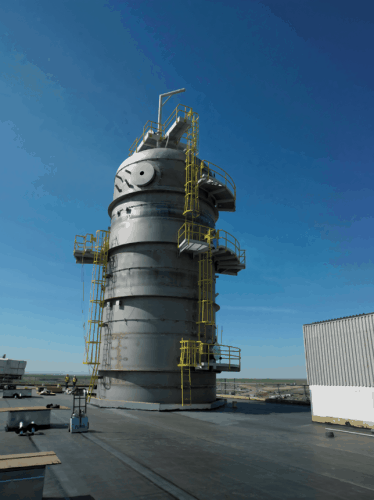 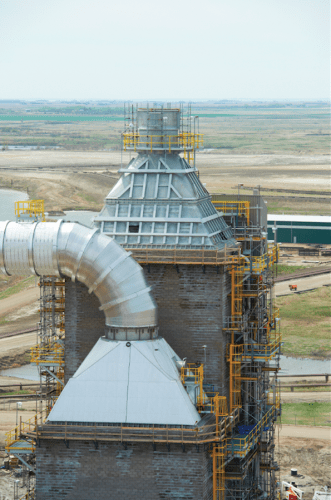 Goldeneye ceased production in 2011. As the natural gas was drawn from the reservoir, it was naturally replaced by saltwater. Shell said the injected CO2 will drive the saltwater back into  the adjacent rock formations  from where it came.

Peterhead is one of  two projects that have  progressed to the next stage  of the government’s CCS commercialisation competition,  an initiative that provides funding for commercial-scale CCS projects in the UK. The project is now coming to the end the front-end engineering and design (FEED) stage. Construction would depend on a “positive investment decision” from Shell and the government, said Bill Spence, Shell’s project lead for Peterhead. “If the project goes ahead… it would be the first project to capture CO2 from a gas-fired power station, transport it and store it permanently underground.

“In Canada exists the world’s first project at a coal-fired power station. It uses the same Shell Cansolv capture technology we propose using at Peterhead. Elsewhere in the world, there are projects that capture CO2 from heavy industry but this would be the world’s first from gas.”

The works at Peterhead to retrofit CCS would include a range of new facilities and modifications to the existing site, said Spence. “These [are] the construction of flue gas infrastructure, a new carbon capture and compression and conditioning plant and infrastructure including a control room, power supply and substations, an access road, storage tanks, a workshop, drainage and a wastewater treatment plant.”

A chemical absorbent is used to bond with the CO2 post combustion, which Shell said would cut emissions by 90 per cent. Once captured, the CO2 would be compressed to a liquid prior to transportation and storage.

The availability and access to suitable storage capacity is an obvious barrier to the wider implementation of CCS. However, Spence said lengthy analysis had shown that reservoirs such as Goldeneye could hold many millions of tons of CO2. Indeed, there was an earlier proposal for a CCS project at the Longannet power station on the Firth of Forth to store 20 million tons in the same reservoir, nearly double that of Peterhead.

“Reservoirs like the one at Goldeneye have stored gas for about 50 million years. We assess the reservoir to have the capacity to store 34 million tonnes of CO2. We are aiming to store 10–15 million tonnes of  CO2 over the 10- to 15-year period of the project.”

Spence said that Shell now has a mass of data to support the belief that Goldeneye was “an excellent storage site”. He said the company’s efforts to understand the reservoir started before the field came on stream in 2004. “We spent 70,000 man hours on CO2 transport and storage issues within a project-wide FEED study.”

When Shell decided not to go ahead with Longannet, it continued to study the reservoir for Peterhead, taking into consideration the integrity  of the formations that lie above it, the caprock and the overburden, which provide the seal to keep the CO2 in place.

“We also looked at what happens when  you re-pressurise the reservoir and sought to determine the best conditions for injecting CO2,” said Spence. “To make sure that our study conclusions are valid, we will monitor the reservoir throughout the injection period – and for a time afterwards. One of the existing wells will be equipped with electronic and fibre-optic instruments for this purpose.”

While Spence and his team  wait for the go-ahead to begin construction, a key objective of  the project will have already been achieved: knowledge sharing. As part of the CCS commercialisation programme, a total of 90 reports will be published during the course of this year and 2016.

His own view is that while the pace of development of CCS has been slow, projects such as Peterhead would push the technology  forward in terms of efficiency  and affordability. He said the  UK’s infrastructure and experience meant it was ideally placed to take a lead, particularly in enabling the development of CCS hubs. This would make it more affordable for new and smaller CCS projects to come online, by plumbing into an existing pipeline network and reservoir infrastructure.

“When mobiles first came out, they were big and expensive. But they were the starting point for a revolution, a transformational technology, and, over time, they have become smaller, cheaper and highly efficient. The same will happen to CCS. The more we do it the cheaper it will get.

“The UK is in a great position to take a lead – and this project [Peterhead] can help. We have an existing power station, an existing pipeline [network] and an empty gas reservoir perfect for storing CO2.

“In fact, with the right support, the North Sea could store CO2 from many more projects. As fields come to the end of their life, like Goldeneye, there’s potential to put them, as well as the associated infrastructure, and all the knowledge and skills built up over time, to new use for CCS. But one step at a time. We know a lot about the Goldeneye reservoir, so it’s  a great place to start.””