The dawn of the solar power station

Engineers are working to bring large-scale solar power to the forefront of the energy sector. 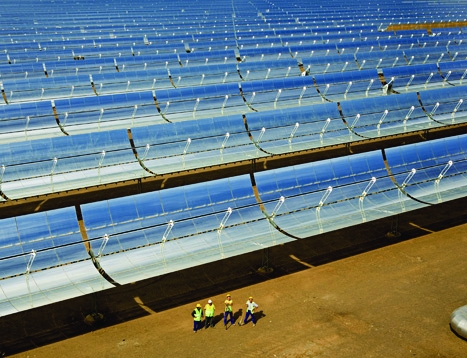 There’s nothing new under the sun. Mankind has been trying to harness solar power for centuries. There are legends of Archimedes defending ancient Greek cities by focusing the sun’s rays onto enemy ships. Leonardo da Vinci designed a system to heat water using solar power for renaissance Florence.

But now it seems that solar thermal power might be back, on a large scale. Engineers in Australia, the US and Spain are building plants that use the sun to generate electricity; not by photovoltaic (PV) reactions in semiconductors, but by simply focusing the sun to heat water, like Leonardo planned five centuries ago. And while Concentrating Solar Power (CSP) is likely to face the fierce competition of the commodity energy sector, it might even form part of the electricity supply in overcast Britain, thanks to an ambitious plan to ’sell sunlight’ from the sunbaked plains of North Africa into Europe.

It’s even making waves in the mainstream energy sector. Areva, the French nuclear industry conglomerate, last month bought Australian CSP start-up Ausra, adding the technology to its renewables portfolio. Areva’s acquisition follows predictions of a large expansion of CSP, with installed capacity projected to grow rapidly from around 680MW today. 2GW of capacity is under construction in Spain, with plants also being built in the US, Australia, North Africa and China. The International Energy Authority predicts a global CSP capacity of up to 20GW by 2020. 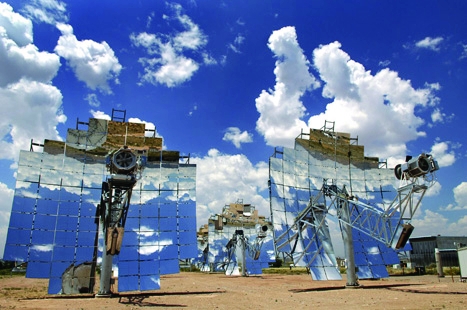 Nicholas Ekins-Daukes, a solar energy specialist at London’s Imperial College, said: ’The problem’s always been cost, but there’s been industrial interest in CSP for as long as there’s been industry. During the Industrial Revolution, people realised that the only reason there had been a revolution was the availability of coal, and they started thinking about what would happen if there weren’t any. People began building what were effectively CSP systems, but none were successful because it was cheaper to dig up coal and stick it in a steam engine. Effectively, that’s where we were until very recently.’

The change has mainly been due to concern over carbon emissions and to an impending shortage in fossil fuels. Government incentives for research into non-carbon power generation have fuelled its development, with feed-in tariffs in Spain and Renewable Portfolio Standards (RPFs) in the US, which fulfil a similar function, albeit to a lesser degree. ’RPFs don’t really come close to feed-in tariffs – they provide about a third of the money that feed-ins give,’ said Tom Mancini, project director of the National Solar Thermal Test Facility at Sandia National Laboratory in New Mexico. ’But they did send the message to utility companies here that many states wanted them to be a little more environmentally conscious. And they were prepared to pay a little for that.’ 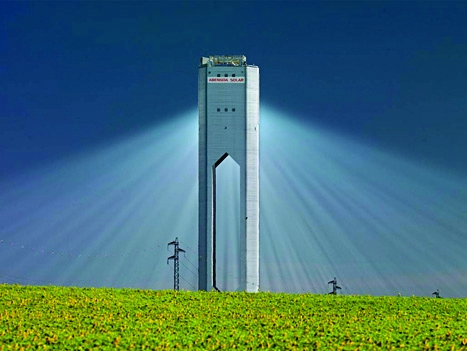 Sandia’s research is ambitious – it aims to reduce the cost of CSP electricity until it can compete with coal-fired power stations. ’If you take a conventional pulverised coal plant, the price of electricity is about eight cents per kWhr,’ said Mancini. ’Look at a parabolic trough CSP plant, which is the most established form of the technology [see side bar at bottom of page] and the one we can estimate the cost of most easily, and it’s currently 14-16 cents. But that changes with a number of things.’

Much of the cost of a CSP plant is due to financing arrangements, Mancini explained. It is seen as a new technology with the associated risks, and so financiers charge a premium. Similarly, contractors have little experience of building the plants, and so also charge a premium. ’We expect costs to come down with experience of the systems and the learning curves in building and operating them,’ Mancini added. 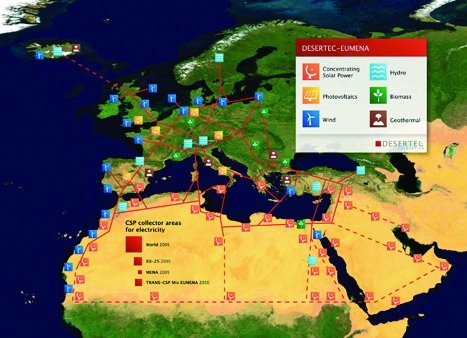 There’s no denying that the equipment is expensive; glass mirrors are complex to make at the tolerances needed, especially if they need to be curved. ’The collectors are 55-60 per cent of the cost of a CSP plant, but you’re basically buying what amounts to the fuel for the entire lifetime of the plant upfront,’ Mancini said. ’After that, the maintenance and running costs are relatively low. We think we can bring the cost of CSP

Ekins-Daukes has his doubts. He said: ’It’s going to be difficult for CSP to compete with coal on cost terms. Even if you look at other forms of solar power, such as thin-film PV, the lowest-cost sheets are now coming down to about $1 per watt, and you’d be hard pushed to get the same price for mirror. Looking at competing against PV, there’s an advantage for CSP in the installation and land preparation costs; PV needs land that’s been flattened by a bulldozer, and CSP needs a series of posts to mount collectors on. But there’s one huge advantage that CSP has – you can store heat. That means that you’ve got despatchable power, unlike every other form of renewable energy where you can only generate at certain times.’

This is where the technology comes into its own. Using a power-tower plant configuration, where a field of angled mirrors focus heat to a single elevated point, solar energy can heat a mixture of molten salts to around 560°C, which can then be pumped to an insulated storage tank. From there, the salt runs through a heat exchanger where it generates steam, cooling to around 250°C, and ending up in another holding tank.

When it’s sunny, you run the cold salt up the tower and heat it up again, but in the meantime you can generate electricity any time using the stored hot salt,’ Mancini said. ’As you are siting the plant in an area with a lot of sunlight, sunny days aren’t a problem.’

Using high temperatures increases the efficiency of heat transfer, and the hotter the steam is, the more efficient the generating turbines. ’We’re looking long term for higher-capacity-factor plants,’ Mancini said; the capacity factor being the proportion of the time that the plant can generate electricity. ’We think from our modelling that we can get a 60-70 per cent capacity factor, and apart from a nuclear plant, you’re not going to get much higher than that.’ This is particularly important because of the large land area needed; Mancini estimates that five acres need to be covered for every megawatt.

Molten salt energy storage technology is in use in Spain, at the Andasol Power Station in Granada, although at a relatively small scale. But these prove the principle, and could pave the way for an ambitious construction of CSP plants across the North African desert belt to generate electricity that can be traded with Europe via a ’ring main’ grid running around the Mediterranean.

This scheme is being promoted via the Desertec Foundation, which has gathered 12 industrial partners, including ABB, Siemens, Schott Solar, E.On, RWE and Deutsche Bank. The goal is to cover around 6,000km2 of desert across North Africa with CSP plants using molten salt storage and air cooling for the electricity generation equipment (a technology yet to be developed elsewhere – CSP plants in Spain and the US use water cooling). The area sounds large, but Desertec points out that it’s the same area as the Nasser Reservoir feeding the Aswan Dam in Egypt. This provides 3GW of hydro power; the CSP plants could potentially provide 100GW.

’In many ways, Desertec is beginning to happen, although not in a co-ordinated way,’ Ekins-Daukes said. ’There are companies negotiating to build CSP plants in North Africa, and the French government is fostering a grouping of Mediterranean countries known as “Club Med”, which is looking at connecting up the grids.’ However, he believes the achievement of Desertec’s goals will depend on an agreement linking the technology development and deployment with more economic development, and more involvement from the host countries.

A matter of focus

The focusing apparatus - known as the concentrator – is key to CSP technology Concentrating solar power (CSP) is a thermal technology; that is, it generates electricity by boiling water, then forcing the high-temperature, high-pressure steam through a series of turbines. In this sense, it is analogous to every baseline electricity generation technology. Rather than burning fossil fuel or tapping the heat of a nuclear reaction, it uses the heat of the sun as it hits the Earth’s surface.

In order to do this, it has to focus the sun’s rays. Rather than heating water directly, it focuses solar energy onto a working fluid with a high specific heat capacity. This runs in a circuit, with the hot fluid generating steam by passing its energy on to water in a heat exchanger to send steam to the turbines. The focusing apparatus – the concentrator – can be a mirror or a lens, although mirrors are generally preferred.

There are three types of concentrator arrangement. The most established is a linear trough with a parabolic cross-section; the working fluid runs in a pipe at the focus of the parabola. A variation on this uses a linear Fresnel lens – a flat sheet of glass etched with a pattern which focuses light passing through it as though it were a full-thickness converging lens – with the working fluid running below the lens. These linear concentrators have been in use for around 25 years.

The second-generation technology is a point-focused system, with a field of mirrors reflecting energy to the top of a ’power tower’ where the working fluid is heated. The heat exchangers sit at the base of the tower, with the turbines sited adjacent. Several plants of this type are now in operation in southern Spain.

The third type of system is known as point-focused distributed. The concentrators are dishes, aiming the sun’s heat at the focus of the parabolic dish. This raises the possibility of installing a Stirling engine – a simple closed-circuit heat engine, which converts heat directly into mechanical work and then electricity – at the focal point. Currently, only one dish-based installation is working on a commercial basis – a 500kW facility near Phoenix, Arizona. Several experimental installations are also operating in Spain and south-western US.