The rise of multi-material 3D printing

In collaboration with Minneapolis-based group Stratasys, Tibbits has set up a radical lab at the Massachusetts Institute of Technology (MIT) to create materials that self-assemble.

Central to his work is the use of multi-material 3D printing to programme different properties into various parts of a product’s geometry. The idea is that these parts will have varying water-absorbing characteristics that activate a change in shape when they come into contact with moisture. The process could lead to structures such as self-assembling furniture, or water pipes that know when to expand and contract.

‘There’s an unprecedented revolution happening,’ said Tibbits. ‘This is the ability to programme physical and biological materials to change shape, change properties and even compute outside of silicon-based matter. But if we look at the human scale, there are massive problems that aren’t being addressed by those nanoscale technologies. If we look at construction and manufacturing, there are major inefficiencies, energy consumption and excessive labour techniques.’

Aside from developments in self-assembly, multi-material 3D printing aims to address inefficiencies by reducing the number of manufacturing steps for one object. Compared with single material 3D printing, it allows a functional product to be created with different properties without the need to bring together components. It increases speed to market by allowing organisations to prototype increasingly complex parts and reduces waste products by using exactly the right amount of material required. 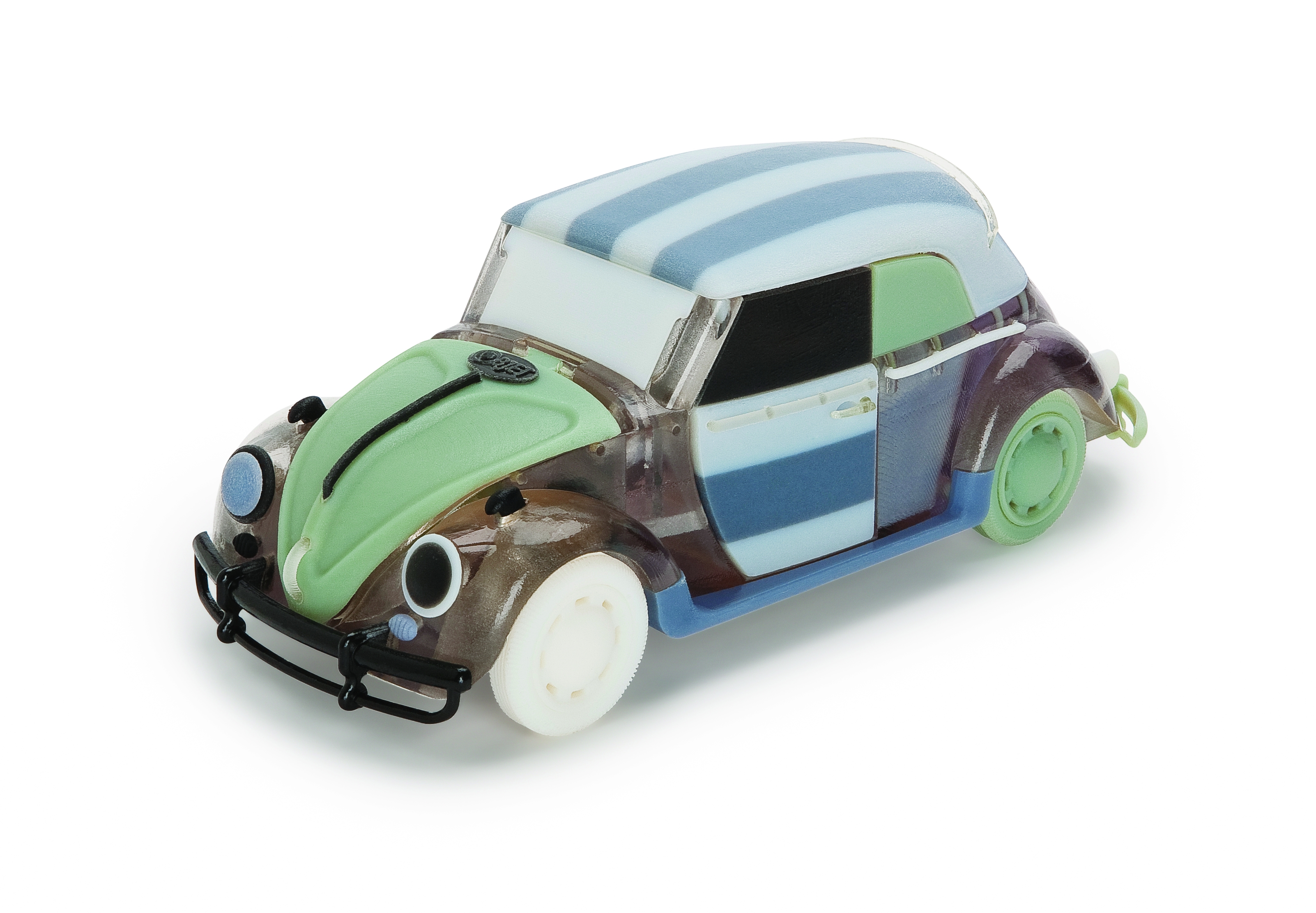 ‘We’re very careful when we talk to people about multi-material 3D printing,’ said James Bradbury, research and application engineer at Exeter University’s Centre for Additive Layer Manufacturing (CALM). ‘There is nothing out there that can do true multi-material manufacturing.’

Currently the only commercial printers marketed as ‘multi-material’ are the Objet Connex range, now owned by Stratasys. The systems work by using the company’s group of 120 3D printing materials, all of which are based on acrylic-based photopolymer resins. These materials are jetted as a liquid from sealed cartridges at a rate of seven-million pixels per second. Once a layer of material is deposited, it is immediately cured by a UV light to turn each liquid layer into a solid. The material is then built upon with successive layers to create the final design.

Rather than using different raw materials, the Connex systems are based on blends of similar materials that provide different properties. ‘We are simulating material,’ explained John Jones, EMEA consumables business manager at Stratasys. ‘In many cases we get very close to the characteristics of some materials but we are not reproducing that material. What’s standing between us using other raw materials is ensuring it has the viscosity to pass through the print jet heads and at the same time be able to cure fast enough.’

Bradbury notes that these simulated materials often lack the resistance, flexibility and lifespan of their natural counterparts. For this reason, multi-material 3D printing has largely remained in the realm of prototyping. The benefits here, however, are significant. For instance, Jaguar Land Rover is using an Objet Connex500 to broaden its resin-based prototyping capabilities. The system has allowed the group to produce a complete facia air vent using rigid materials for the housing
and air-deflection blades, and rubber-like materials for the control knobs and air seal.

Elsewhere, the aerospace industry is hoping to move away from prototyping and towards developing an end product. Airbus, for instance, has been exploring the application of titanium powder-based additive-layer manufacturing for constructing large-scale complex components. The group, which is optimistic in its expectations for the market, believes that it will be able to build a plane from a multi-material 3D printer the size of an aircraft hanger by 2050. According to reports, the 3D printer would have to be around 80x80m in size.

While existing 3D printers are far from achieving this, groups such as MIT and CALM share Airbus’s ambitious vision for the future. They believe it is only a matter of time before the technology enables true multi-material printing. ‘Commercial solutions have largely stabilised to the point that the architecture is the same, the competitors are the same,’ said Bradbury. ‘The real innovations will happen in the research world. Multi-material is the next evolution in the technology… you’re probably looking at a 5–10 year timescale to see real multi-material integration.’

Integration of electronics is a key area of focus for UK researchers. Warwick University, for example, has a conductive plastic composite that can be used to produce electronic devices. The material, dubbed ‘carbomorph’, enables engineers to lay down electronic tracks and sensors as part of a 3D-printed structure. According to the research team, it allows the printer to create touch-sensitive areas that can then be connected to a simple electronic circuit board. So far the group has used the material to print objects with embedded flex sensors or with touch-sensitive buttons such as computer-game controllers or a mug that can tell how full it is.

The next step is to work on printing much more complex structures and electronic components, such as wires and cables required to connect the devices to computers. Along with self-assembly, and the development of stronger, lighter and more flexible materials, it’s easy to see why there is so much excitement around the potential for multi-material 3D printing. Ultimately, multi-material 3D printing could produce a radical shift in the way we experience our material world.