Timber towers: the rise of the wooden skyscraper

Engineers and architects around the world are re-evaluating the use of timber as the prime construction material for high-rise buildings. Ben McCluskey reports.

Wood is the oldest of construction materials. It’s elemental, and humankind’s relationship with it runs deep, but in a very literal sense, we’ve been burnt by it one too many times. After the Great Fire of London wiped out 80 per cent of the city, the London Building Act of 1667 asserted all houses were to be built in brick or stone. Since then, steel, concrete and glass have all come to dominate our city skylines, but timber is set to make an unlikely return.

Something old, something new

A number of high profile architects and engineers are trying to recast wood as a material fit for the 21st Century. In large part, that’s down to the emergence of cross-laminated timber (CLT), a type of wood panel made from multiple layers of solid-sawn lumber. “The wood products architects are using today are very different from the material we’ve used throughout the rest of history,” explained Richard Harris, an Honorary Professor of Timber Engineering at the University of Bath with 25 years’ experience as a structural engineer to his name.

The allure of CLT stems from the fact each layer in a panel is orientated with the grain running perpendicular to adjacent layers; much like plywood, but with thicker laminations. Rather than flammability, timber’s main weakness has always been its sensitivity to moisture content changes – nobody wants a tall building prone to warping and distortion. The cross gluing in CLT overcomes this, providing each panel with exceptional dimensional stability. This stability augments timber’s inherently high strength to weight ratio, meaning CLT performs more like steel than regular wood panels or beams.

In combination with high-precision digital manufacturing processes like CNC milling, CLT allows architects to design and build with timber at scales unthinkable a century ago. Panels can also be cut offsite with great precision, speeding up the entire build considerably and lessening the overall impact to neighbouring residents and businesses. 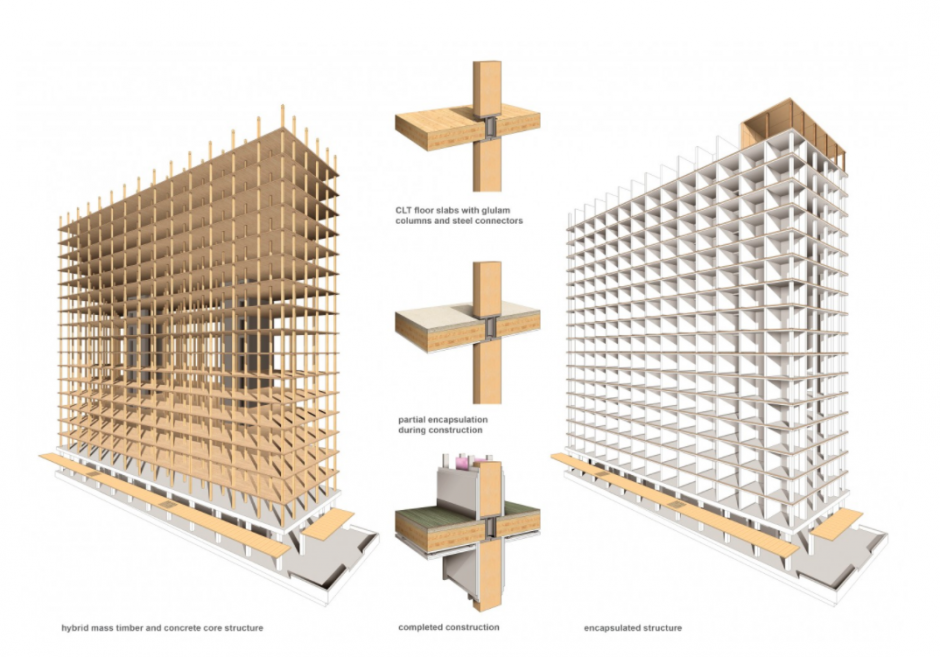 Harris is one the few people unsurprised by CLT’s rapid rise to prominence: “CLT has been commercially available for at least 20 years, but the construction industry is very conservative in accepting innovations,” he said. “The industry has only adopted CLT into the mainstream in the last five years as cost has dropped. Now we’re beginning to see the material’s limits explored in exciting ways.”

Those experiments are gathering pace.

Head in the clouds?

The height of the tallest timber building has doubled in the last nine years. The University of British Columbia’s 18-storey, 53 metre tall Brock Commons student residence currently holds the record for the highest inhabitable structure. However, Europe has plenty of plans to go higher.

Construction of Amsterdam’s 21-storey (73 metre high) Haut building is due to start this year and the 84 metre high, 24-storey HoHo building in Vienna should open in 2018. Other, even more ambitious projects on the drawing board include the 40-floor Trätoppen (“Treetop”) in Stockholm and the 300 metre high Oakwood Timber Tower ‘plyscrapers’, proposed by PLP Architects for London and an as-yet-unconfirmed location in The Netherlands.

PLP’s London offering is 80-storeys, leading many to question the likelihood such a structure would be granted planning permission. According to PLP’s Kevin Flanagan, the Oakwood Timber Tower project isn’t designed with immediate construction in mind, but to demonstrate its technical feasibility. As an expert in tall buildings, he understands better than most where more research needs to be done: “A 200 metre building doesn’t behave in the same way as a low-rise,” Flanagan explains. “The dead load of a building is overtaken by loads like wind and torsion.” Innovation is one thing, but regulations are there for a reason, and it’s important that they both respond to, and challenge, emerging trends …which brings us back to fire.

Received wisdom says fire risk should rule timber out as a structural material in tall buildings. What many people don’t realise is large timber panels and beams burn slowly and quite predictably. Size is important here, because wood resists heat penetration by the formation of self-insulating char. The char rate of CLT has been tested at a respectable 0.67 mm per minute. As such, these panels are capable of the 30-, 60- and 90-minute resistance times required by many building regulations. Steel, by contrast, loses structural integrity very quickly in certain contexts. The takeaway here is not that timber is more fire resistant than steel – it’s not – but performance varies according to such factors as load and temperature distribution. The point is that, in the realm of sensible fire regulation, context is king.

Arup’s Global Timber Specialist Andrew Lawrence is a long-time champion of timber construction. It’s for that reason he’s keen to ensure conversations around tall timber are appropriately nuanced. Lawrence’s worry isn’t the misconception that timber is highly flammable, but rather the claims that it is doesn’t pose a fire risk at all: “The fact mass timber chars slowly is completely true, but if you use a combustible material as the building’s core, it’s also true that the fire load [which dictates a fire’s potential severity] is greater.” The key is to understand that both of those facts can hold true, rather than one at the expense of the other. 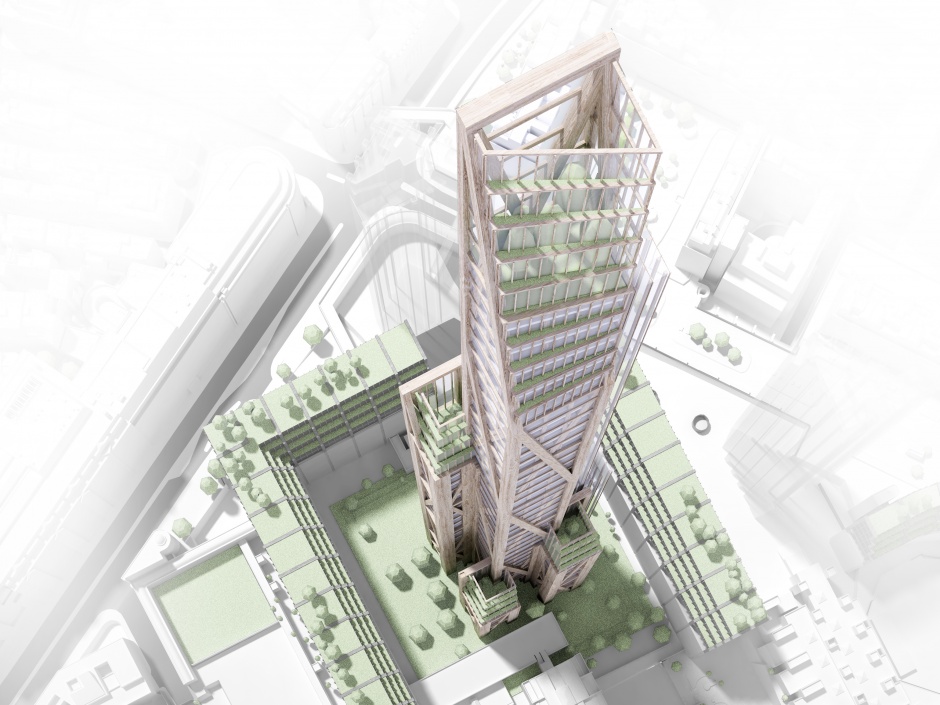 Lawrence is keen to challenge a typical metaphor used in discussions around timber and fire safety: “We know that once the fuel stops burning, the timber will too if only a limited amount of timber is exposed to the fire,” he says. “The common example given is to consider the difficulty of starting a fire using just a single large log. However, this comparison may not hold in a building where compartments are made entirely from CLT– it’s the equivalent of a pile of large timber logs which might fuel one another through their surface heat.”

With a wealth of experience, caution is the name of the game for Lawrence: “You can build tall buildings safely using timber, but only if you ensure most of the timber can’t become engaged in the event of a fire,” he asserts. Ultimately then, if engineers and architects can continue to educate themselves with the latest ongoing research, we may yet see forests of safe tall buildings flourishing in our cities.

The rise of the energy autonomous robot