When Formula One (F1) teammates Lewis Hamilton and Nico Rosberg first unveiled the car they will be driving for the 2015 season in Spain earlier this year, expectations for the new vehicle were understandably high.

Not only did the Mercedes team win both the drivers’ and constructors’ titles last season, but its car, the Mercedes F1 W05, won 16 races, including 11 in which it took both first and second place. It also racked up 18 pole positions and 12 fastest laps, making it one of the most dominant cars in the history of F1 racing.

Perhaps most remarkable of all, however, is that it achieved this success without the noisy gas-guzzling 2.4-litre V8 engines used in previous F1 seasons, but with a 1.6-litre V6 hybrid.

Developed by Mercedes AMG High Performance Powertrains in Brixworth, Northamptonshire, the PU106A Hybrid was designed to achieve the same power output as its V8 predecessors — around 750 horsepower — while using one-third less fuel.

With a thermal efficiency of more than 40 per cent (compared to the 29 per cent previous F1 engines typically achieved), the PU106A has been hailed by some as the most efficient gasoline powertrain ever built. In October, it was awarded the Royal Automobile Club’s Dewar Trophy for outstanding British technical achievement.

The engine was developed in response to changes to the F1 regulations, which came into force at the beginning of the 2014 season. Rather than limiting engine capacity, the new rules for the first time restricted the amount of fuel that the cars could consume. Teams that had previously used around 150kg of fuel each race were now limited to 100kg.

This was a huge culture change for F1, said Andy Cowell, managing director of Mercedes AMG High Performance Powertrains. It shifted the focus away from developing engines that could reach astonishingly high revolutions per minute but had little relevance to modern road cars, to squeezing every last drop of power from each kilogram of fuel.

The regulations also opened up development of new technologies within F1, by introducing turbochargers and systems to recover waste energy. 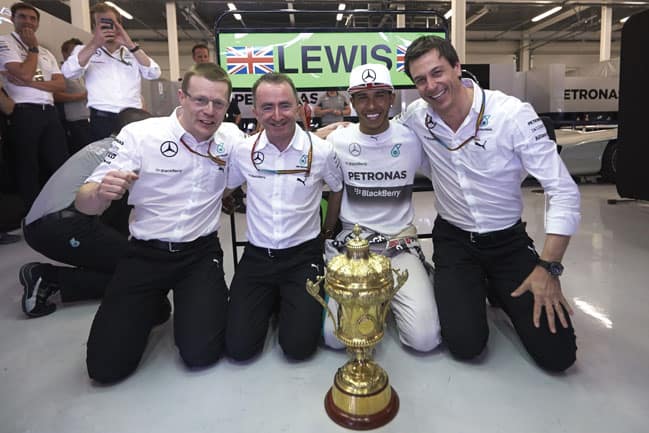 So, for example, the PU106A includes a turbocharger in which a turbine wheel recovers waste energy in the exhaust and uses it to power a compressor.

This then increases the pressure of the air going into the combustion chamber in order to boost power.

Connected to this is a further device, the Motor Generator Unit — Heat, which recovers any excess waste energy harvested by the turbine in the exhaust and not needed to power the compressor. The energy can then be stored in the battery, or used to increase the speed of the turbocharger to prevent what is known as ‘turbo lag’. This is when low pressure in the exhaust slows the turbine, creating a delay between the driver pressing their foot down on the accelerator and receiving the desired power boost.

‘The beauty of the MGU-H is that the motor provides speed control for the turbocharger, which means you don’t need many of the tuning features that you see on a more conventional turbocharger,’ said Cowell. ‘So it’s a very neat feature.’

Harnessing the waste energy in the exhaust in this way was a significant challenge, said John Wood, chairman of the RAC’s Dewar Trophy technical committee. ‘This was a big step forward,’ he added.

The powertrain also contains a system to recover some of the energy that would normally be lost during braking and convert it into electricity, known as the Motor Generator Unit — Kinetic. Unlike the previous F1 kinetic energy-recovery system, known as KERS, which was able to provide up to 60kW of power for short bursts of a few seconds per lap, the new unit can provide up to 120kW for more than 30 seconds per lap. 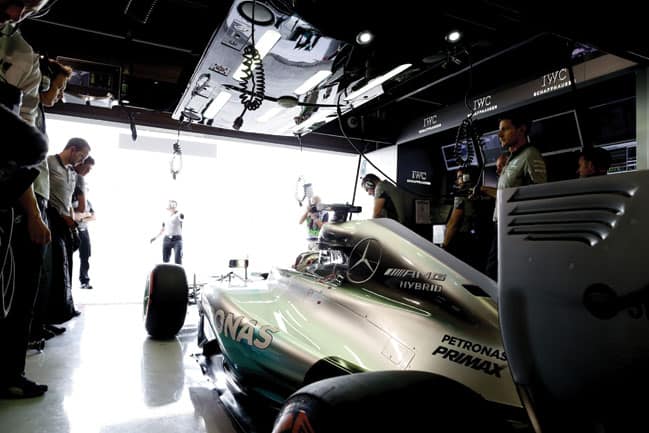 ‘For some circuits it can be on for 100 per cent of the time that the driver wants it,’ said Cowell. The engineers at Brixworth worked closely with their colleagues at the Mercedes AMG Petronas F1 team in Brackley to ensure the power unit and car were developed together. Their first engine, which was designed to develop the new hybrid technologies, was 50kg overweight and far too bulky to fit inside an F1 car, said Cowell.‘But because we had the right discussions early on, we could do a careful calculation of what was good for the race car in mass, centre of gravity and aerodynamics, and what would help the power unit to push the car down the straight, and we could balance all of that out.’

For example, using very efficient motors in the hybrid system helped to limit the energy lost through waste heat, increasing the amount of power available. But it also reduced the size of the radiators needed to reject excess heat, improving the overall aerodynamics of the car, according to Cowell.

The new regulations, with their emphasis on fuel efficiency, have also made F1 technology far more relevant to road car research and development, said Cowell. ‘It is much more analogous to what is going on in the road car world, where regulations are progressively reducing the amount of carbon dioxide that can be emitted per kilometer.’

Work carried out for the previous KERS system has already trickled down into road vehicles such as Mercedes’ S500 Plug-in Hybrid and SLS AMG Electric Drive cars. Now several R&D projects are under way to incorporate the new hybrid technologies into future road cars, said Cowell.

‘In the road car world development will continue to go in the direction of reducing the capacity of the engine while increasing the amount of boost, so an electric turbocharger will help there,’ he said. ‘And a high voltage MGU-H built in to the turbocharger is a lovely marriage between a hybrid system and an internal combustion engine.’

Whether the Mercedes AMG Petronas F1 team can repeat the success of last year in the 2015 season is yet to be seen. But the PU106A Hybrid remains a significant achievement, said Wood.

‘This was a brilliantly executed approach,’ he said. ‘They have done something quite remarkable with what is a very complex system.’