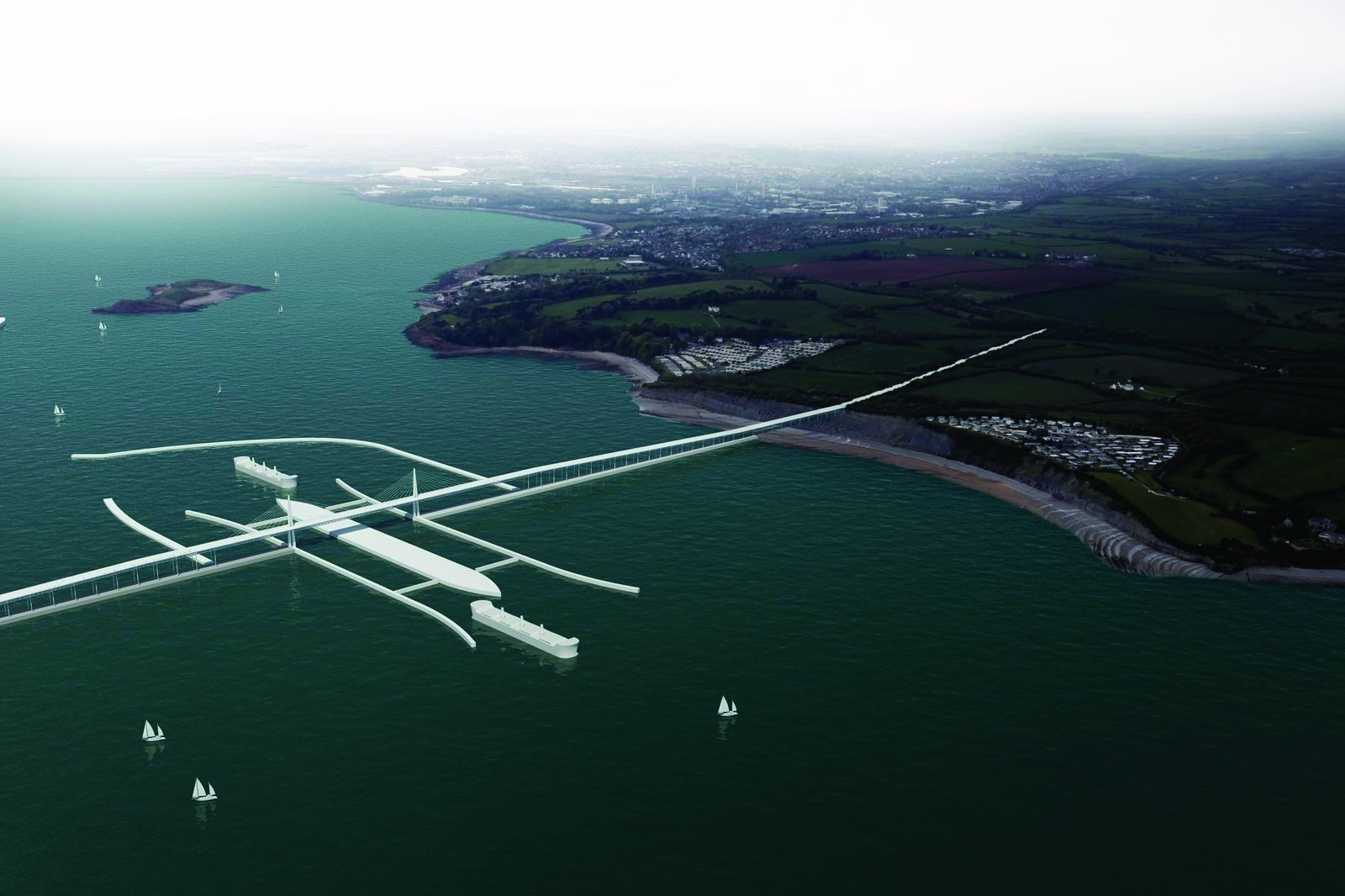 Plans for an energy-generating barrage across the Severn Estuary have been on and off the table for decades. The government has ruled out a publicly funded scheme but is currently listening toproposals for a privately funded one.

For our latest reader Q&A, we put your questions on the challenges of harnessing power in the Severn to a panel of experts.

Is it really necessary to build a barrage in order to harness the Severn’s tidal power?

Having studied all forms of the hydro-environmental aspects of the Severn, I believe a barrage provides by far and away the most effective means of harnessing this energy. The power that can be theoretically obtained from a basin is proportional to the wetted plan surface area and the square of the head difference across the structure. We know that the Severn Estuary has the second highest rise and fall of tide in the world, but in addition if a barrage is built roughly along a line from Lavernock Point in Wales to Brean in England then this captures a plan surface area at high tide of approximately 500 square kilometres. This is a huge surface area and offers us the opportunity to generate a unique large amount of secure renewable energy for at least 120 years, and probably many centuries well into the future.

Tidal lagoons, fences and other technologies are all possible but none are better able to harness the enormous energy in the Severn estuary. For example, a tidal fence would generate about 0.88 TWh versus about 16.5 TWh per year from our barrage. And, of course, not offer any flood protection. A scheme of our scale is also attractive to private investors – a vital consideration given there is no public money for construction. However, building the barrage does not rule out additional generation from, say, downstream lagoons.

What technologies do you think provide the best alternative to a barrage?

Within the tidal power arena there is an enormous research effort into tidal stream devices. However, tidal stream devices are in their mechanical infancy and can generate power only in small amounts, thus requiring enormous numbers in order to have any significant impact on the renewables requirements. The costs of tidal stream devices are very high – currently estimated at 29p/kWh – and need to see significant cost reductions in the coming few years to be viable. In our view, the best way to extract power from the tides is the offshore tidal lagoon. Tidal lagoons, unlike barrages, do not block navigation, fish migration, sediment transport, and they do not alter the shoreline habitats. In fact, they will create wildlife habitats for sea creatures and birds, and provide good fishing and other recreational opportunities for humans. Tidal lagoons are cost-competitive – currently estimated at 4p/kWh - and potentially privately-funded. Thus the public will pay nothing for them and will benefit from the tax revenue and jobs they will create. Tidal lagoons will be much smaller in size and output than the Severn Barrage and will fit comfortably into the existing electrical grid and generate power 4 times a day. Additionally, by providing pumped storage capacity tidal lagoons could recover some of the wasted night-time power from nuclear plants.

For each marine basin one has to consider the topographic and hydrodynamic conditions and design the most appropriate structure to maximise the energy from the basin, whilst at the same time minimising the environmental impact. In the Bay of Fundy, from my knowledge of the topography and the hydrodynamics, I would see this site as being ideally suited for tidal stream turbines; along the North Wales coast I would see coastally attached lagoons as being ideal, which would also offer the benefits of protection against coastal flooding. However, in contrast I still personally have yet to be convinced that anything other than a barrage is the ideal solution to gain the maximum renewable energy from the Severn Estuary.

Would it be possible to turn the barrage into a dock complete with harbour and rail links for affected upstream industries, potentially improving the cost-benefit ratio of construction and making turbine servicing easier?

Theoretically it would be possible to turn the barrage into a dock as suggested, but this would need to be built in the deepest section of the estuary, thereby losing a large number of turbines and power generating capacity. Furthermore, there would not be the space for handling cargo off ships etc. and neither would there be the availability of land nearby to store cargo for loading on and off ships. Hence, this would not be an ideal place to locate the dock for these and other commercial reasons. With regard to servicing the turbines, this would be undertaken far more economically from the proposed service road over the barrage, as designed at present.

How long would it take to develop and manufacture the required technology and provide the necessary support services?

The most critical construction activity will be the caissons in Port Talbot and their placement to form the barrage. Turbines have been producing power for decades but nothing bi-directional of the size we need. Designs will need to be tested. Overall, running concurrently with building the main structure, turbines will take between seven and nine years to test, build and put in place.

The tidal lagoon technology requires no development in that it uses existing low-head hydroelectric generating equipment such as has been in use in rivers for about 150 years and in the (La Rance) tidal barrage in France since 1965. The only thing holding up deployment of this technology is getting planning permission and private funding for the first site. Once the first site proves the economic case there are sites around the UK that could deliver 6000MW of generation.

Why would overseas investors choose to put funds into a project in the Severn?

International finance is just that, international. Put simply, sovereign wealth funds, infrastructure investors and pension funds are interested in securing long term returns. The UK is already investor-friendly because of its transparent rules and laws. If the UK Government gives the green-light, and agrees consumer price support, then political risk is pretty much removed. Prospects are then very favourable for investors. In return, the UK gets a power station with a life of at least 120 years which, after the initial price support, will generate far more cheaply than other fuels and renewables – we estimate £20/MWh. Coal today generates around £50/MWh.

Private investors will not invest into the Severn Barrage without UK government guarantees/support because it is uneconomic. However, the Severn estuary (amongst other similar sites around the UK) is an ideal location for tidal power development in that its tides are enormous, its bottom is flat and shallow in many locations, and it is in a modern populous country with the rule of law and a sophisticated electricity market. Tidal lagoon projects are in development in Korea (a 260MW plant was completed in SIHWA in 2012 and is functioning as predicted), Alaska, and Mexico.

Would it be possible/beneficial to incorporate road or rail links into the barrage?

Our proposal is for generation only, although earlier architect drawings show the structure topped with a bridge for road or rail. Certainly the structure would have to be much stronger to carry anything other than a service road and cranes. We did a study that showed a toll road would not pay for construction. If government wanted a road or rail link, in the national interest, we would need to hear about that upfront to recalculate everything.

Hafren Power’s website says a barrage would producecompletely predictable base-load electricity on average for 15.25 hours a day. How much electricity would this produce and how variable would this output be (“base-load” suggests uninterrupted supply)?

Installed capacity will be 6,500MW, about the same as three or four nuclear reactors or 3,000 offshore wind turbines. We can accurately predict the tides for years ahead, giving grid operators complete transparency. Wind is unpredictable in comparison. With 1,026 separate turbines, the chances of the barrage having a major outage are remote. So not uninterrupted, but it is a very valuable, zero carbon and totally predictable electricity generator.

While barrages are designed to allow bi-directional generation, in practice they predominantly generate only on the ebb of the tide. Accordingly, the barrage would generate power in enormous amounts twice a day for about five hours each pulse. One of these pulses will occur during the night when the UK is already burdened with excess power from its nuclear power plants, making it all but useless. The timing of the daytime pulse will vary by 50 minutes every day. The National Grid must be prepared to deliver power whenever a customer wants it, whether the barrage is generating or not. Thus the barrage will not obviate the need for backup generating capacity, making it even more expensive than it would appear when assessing the project in isolation.

The power (and electricity) from a barrage would be extremely predictable and with two-way generation there would be four peaks per lunar day. This predictability can be planned for at least a year in advance with considerable accuracy, making tidal (or lunar) renewable energy much more attractive, in principle, than most alternative forms of renewable energy.

How would you match this to the changing demands of the grid, especially as the amount of more flexible fossil-fuel generation isexpected to decrease? Could you incorporate energy storage technology?

We see the barrage as part of a mix. It can deliver a predictable 16.5TWh per year that will offset, say, generation from shale gas. In the event the barrage’s output was not required (unlikely given its low input cost) in the UK it could be exported, it could be stored if technology allows or its turbines simply allowed to freewheel. The turbines could also be used to manipulate water levels to extend the period of generation. However, this could have implications for other estuary users, wildlife and human. Conceivably some of the barrage’s output could be used to cheaply ‘prime’ pumped storage generation elsewhere in Britain.

Very few tidal barrages have ever been built. What experience does Hafren Power have that will enable the company to complete such a challenging project?

A world dominated by plentiful coal, oil and gas – in an era before global warming was identified – wasn’t one where tidal power had a reason to flourish. EDF’s excellent La Rance barrage is one of the few exceptions – it has been generating reliably, still with its original turbines, since 1966, and produces France’s cheapest electricity. We will rely on partners such as Arup and turbine manufacturers. I believe the engineering challenges are perfectly manageable. The political challenges in securing approval are harder.

One reader commented: ‘Just get on and build it.’ Why hasn’t a barrage been built already and how long do you think it might take?

One of the reasons the barrage has not yet been built is due to the understandable concerns of some of the NGOs about the environmental considerations. I believe we have addressed most – if not all – of those concerns and now have a better scheme, offering the same daily power supply, over longer periods of the day, and with four rather than two peaks. Hence, in my opinion, and in benefiting from the concerns raised by some of the NGOs relating to the previous scheme, I believe we have improved the design and are now going forward with a better scheme. In terms of the biggest engineering challenges if the project does get the green light, then I believe that on the technical side these can all be addressed; the barrage is relatively low, the turbine technology has been tested and developed etc, but putting the last caisson into the estuary in strong currents will be a challenge.

‘Just get on and build it’ from government would be music to our ears. With a fair wind, or should I say tides, 2025 would be the earliest for full generation.

The Engineer Q&A: The Severn Barrage