Humans have a strange response to things that are lifelike, but not alive. It makes some people profoundly uneasy. Think of waxworks that look almost – but not quite – like the people they’re modelled on. Think of animated films where the characters look almost human, but their skin is too waxy and the eyes are glassy. It’s known as the Uncanny Valley, and to watch the videos of Boston Dynamics’ robots is to take a trip into its depths.

Spun out from the Massachusetts Institute of Technology’s Leg Laboratory (now called the Robot Locomotion Group) in 1992, Boston Dynamics designs and builds dynamic robots that move like animals. Its best-known product, BigDog, is a four-legged robot that, yes, moves like a big dog, trotting eagerly along a variety of different terrains, stumbling and slipping on ice, then righting itself and continuing along its dogged path. But it’s very obviously a machine. Its limbs are metallic, with exposed joints and servos. Its body is oddly humped. Its two-stroke engine emits a constant eerie whine. It doesn’t have a head.

’Obviously, people do find it creepy,’ said Marc Raibert, Boston Dynamics’ president and project manager, who founded the Leg Lab 30 years ago. ’About a third of the 10,000 or so responses we have to the BigDog videos on YouTube are from people who are scared, who think that the robots are coming for them. But the ingredient that affects us most strongly is a sense of pride that we’ve been able to come so close to what makes people and animals animate, to make something so lifelike.’

Raibert’s efforts have borne fruit recently, with a $32m (£20m) award from DARPA, the US Defense Advanced Projects Agency, to develop BigDog in a project called LS3, the Legged Squad Support System. LS3, a 30-month project, aims to develop a prototype, field test-ready ’robotic mule’, that can carry a squad’s packs and equipment, bearing loads up to 400lb over distances of 20 miles over rough terrain, in missions up to 24 hours.

’With BigDog, you can list the best things it did: it carried 340lb; it went for 13 miles; it climbed difficult terrain,’ said Raibert. ’But it didn’t do all those things at once. Even though each of the LS3 requirements isn’t that much more than we achieved with BigDog, putting them all together adds up to a much bigger set of challenges.’ 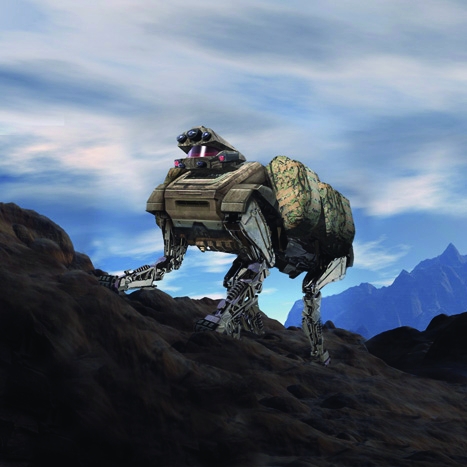 Raibert thinks that LS3 will need to have a more efficient design than BigDog. ’Some of that will come from the hardware, such as the actuators, and some from the controls; the two are tuned to work together,’ he said. The system will also incorporate a degree of autonomy. ’The basic paradigm is for it to follow someone, but the robot will be responsible for dealing with terrain variation, adjusting its speed and how it uses its legs. But one of our big goals is to make it so that it doesn’t need a dedicated driver; to make it capable enough that when it follows a leader, the leader can do other stuff and only pay attention to it occasionally.’

The challenge of making a robot that moved like a living thing was the focus of Raibert’s time at the Leg Lab. ’If you go back to the early days of walking robots, the approach was to make them move slowly, just figuring out where to put its feet so that it balances, like a table balances.

’If you look at popular culture, at people dancing like robots, it’s interesting: what do they do? They make their motions jerky, they move at a constant speed and then stop. But I forced my lab to forget about balancing like a table, and instead to use the kinetic energy and the placement of the feet in relation to the moving body. That’s the approach that continues to pervade our work – we think about how the thing moves as an ongoing process, not as a series of static points in time. The key ingredient is to let the system be dynamic.’

I’m an engineer who builds robots; I don’t know why people would be interested in my views on the ethical question

Oddly, though, Boston Dynamics wasn’t originally set up as a robotics company; Raibert had developed physics-based modelling and simulation of robots and humans, and the firm was set up to commercialise that. But soon the company started to work with Sony on its Aibo robot dog, developing a control system that allowed it to run. After that, it continued in the same vein, with a tool for Sony’s Qrio humanoid robot, allowing choreographers to design dance routines. ’We still weren’t building robots as a company, but in 2003, we won a DARPA contract for BigDog, which was just in response to a request for a biologically inspired legged robot. Even though that was the sort of thing I’d been doing at MIT, it was the first robotic contract for Boston Dynamics.’

After that, robots began to play a much bigger part in the company, and today Raibert estimates that they comprise two-thirds to three-quarters of Boston Dynamics’ work. ’We have weirder things than BigDog!’ he enthused. ’We have a six-legged robot that has legs which are half-like a leg and half-like a wheel; we have a wheeled robot with a special leg that allows it to jump about 10m; we have snake-like robots.

’We’re interested in any sort of mobile platform where by combining a mechanism with controls and computation, you get more than either can do by itself. That’s a pretty good mission statement for the company, actually.’

Q&A - Boldly going where no vehicle has gone before

A cynic might ask why go to the bother of creating robots with legs, when tracked or wheeled vehicles can do the job?

It’s just not true. Wheeled and tracked vehicles can cover a very small fraction of the Earth’s surface; people and animals can go almost anywhere. It’s not true yet that our robots can go anywhere, but that’s our goal, to go where wheels and tracks can’t.

Do you look for particular animals that can handle particular sorts of terrain, and model a robot’s movement after that?

No, we take broad inspiration from nature. In presentations, we frequently show mountain goats in very difficult terrain, and we’ve worked with biologists – on BigDog, for example, we had a group from Harvard’s biology department – but we can only take broad inspiration. We can’t replicate the microstructure of animals yet. We can’t make muscles like they have, we can’t have as many degrees of freedom in our systems as they have. Look at the hooves or feet of an animal, and there’s all kinds of stuff going on, and it’s hard to capture all of that, as engineers.

There was a ’yet’ in there.

I think as the field gets more sophisticated, we’ll be able to do more. Our six-legged wall-climbing robot has a lot of microstructure in its feet. People we work with are using gecko-like Van der Waals-type adhesion forces, which aren’t ready for prime time just yet, but in 10 years’ time you’ll see robots with very sophisticated dry adhesive feet. We did have a project with micro-hooks in its feet; up to 50 very sharp structures on carefully designed spring systems, and we’re now using more sophisticated processes to make these elements. But we’re still nowhere near animals. A bug might have hooks, plus Van der Waals elements, and all kinds of stuff; it’s amazing what nature can pack in.

Are you looking at any non-defence applications for your robots?

We’re interested, but so far, the main other field for this type of robot is entertainment, and we don’t have any activity in that direction. To be honest, there’s so much defence-related stuff to do, and robotics is growing so fast with so many projects, we’re hiring as fast as we can.

Are there any plans for your robots to carry armament?

But do you have concerns over the ethical side of how the robots might be deployed?

I’m an engineer who builds robots; I don’t know why people would be interested in my views on the ethical question. The big thing is that some people think the designer should be responsible for all possible uses of the system, and others think that the designer is just building a platform and someone else is responsible for the ethics of how it’s used. I look at our systems and I say they’re vehicles. You could put sacks of rice on them. You could put bullets on them. Their use is to go to places on Earth where you can’t put vehicles now – and there are a lot of uses that can be put to. I’ve been thinking about this, and I’m not sure that I have the answer yet.