Developed by Cambridgeshire product development firm 42 Technology the so-called ‘Adaptable Carriage’ system allows the seats and tables within a passenger train carriage to be automatically stowed to create space cargo that would otherwise go by road. 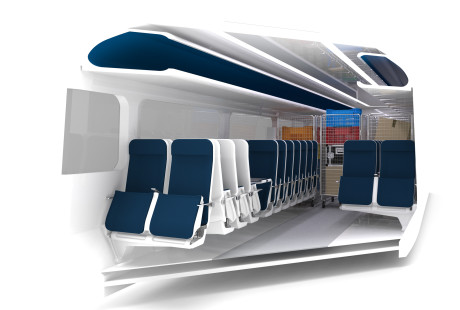 The system - which can either be retrofitted to existing carriages or integrated into new design - has been developed as part of a two-year programme funded by RSSB (Rail Safety and Standards Board). According to 42 Technology the carriage features three key innovations: a concept that enables spare passenger-carrying capacity on, for example, off-peak services, to be used for cargo; a forward-folding seat design that allows any rubbish left on seats to be tipped onto the floor for easier cleaning; and a sliding mechanism to configure the seats into a seated position and to lock them in position along the carriage.

The reconfiguration process is fully automated, takes under three minutes to complete and as a result the 20 rows of seats in a typical passenger carriage (with four seats per row) can be compressed to create cargo space equivalent to the capacity of an articulated lorry.

All the seats, tables and draught screens within each section of an Adaptable Carriage are connected together and can be moved along the length of the carriage via a system that also acts to cover the working mechanism in passenger configuration. The control system ensures that all seats are safely secured in both the passenger and cargo-carrying configurations, and it can be readily integrated with the carriage control system to automate door locking ensuring complete passenger safety.

The system is claimed to be fully compatible with both steel-frame and modern aluminium train carriage designs using cantilevered seats.

Commenting on the project RSSB technical director Chris Lawrence said: “Adaptable Carriage is an example of what can be achieved when the UK rail industry partners with a cross-sector innovation consultancy to deliver solutions to specific rail challenges.”

42 Technology is already working with a number of interested parties to support initial trials of Adaptable Carriage and to enable further commercial development of the technology. A company spokesman said that the firm hopes to be able to make an announcement about specific trials before the end of this year.