Chris Pickering speaks to Prodrive’s chief engineer for structures and analysis to find out how the company is using the latest simulation techniques to speed up its development process.

Sometimes necessity really is the mother of invention. When lockdown restrictions saw Prodrive’s manufacturing activities put on hold in the spring of 2020, the company was unable to begin building the physical prototypes for its forthcoming Dakar Rally contender, the Hunter. Instead, the engineers continued in the virtual realm – extending their simulation work beyond the point where they would normally have switched to real-world testing.

In the end, the test phase was delayed by more than three months. That might not seem like a long time, but it’s an eternity in motorsport, and it represented a potentially serious setback for the engineers. And yet far from being a calamity, the test programme passed noticeably more smoothly than usual. Not only had the use of digital prototyping kept the project on track, but it had resulted in improvements to the workflow that the company now intends to harness for future projects.

“The Dakar Rally is the ultimate test of durability in the harshest of conditions,” comments Ryan Vann, chief engineer for structures and analysis at Prodrive. “Having not only used simulation to help us catch up time lost at the start of the Prodrive Hunter’s development process, but then to finish in the highest position ever of any debutant in the race, gives testament to just how much more we can now rely on the digital world than previously. Our growing capability and advances in technology in this area mean we are already using virtual testing across a variety of projects.”

Vann is a keen advocate of digital testing, but he points out that the biggest benefits still tend to come when it’s used during the early stages of a project. There’s a push in some areas of the industry towards zero prototyping, with suggestions that it may eventually be possible to sign off a vehicle digitally without physical testing, but he remains sceptical.

Part of that comes down to the challenge of capturing the full range of variability that can be encountered in the real world. When it comes to structural design, this includes the various load conditions that the vehicle has to deal with, as well as the exact details of the manufacturing techniques that are employed.

Even something as simple as driving along a bumpy surface holds a deceptive number of challenges, he points out: “A sign-off cycle might involve thousands of miles on a random road profile. That introduces a broad range of excitation frequencies into the vehicle, so you’ve got a mixture of high-amplitude low-frequency impacts into the structure, but also low-amplitude high-frequency content that is much more critical for high-cycle fatigue.”

“What we would like to do in the analysis world is simplify that down to a set of one or two cycles that we could just repeat for a set number of times. It would make the analysis process a lot easier,” comments Vann. “But the problem is that you’d miss a lot of the detail. And if you make assumptions to address that, you can overestimate or underestimate the fatigue performance of the structure.”

One way to simplify this is to take a statistical approach, where a comparatively straightforward analysis is combined with a ‘confidence factor’ that accounts for the more unusual load cases. With this approach, the full range of conditions can be analysed statistically, but not predicted definitively, which is why it poses issues as the input for a digital sign off.

One of the hardest things to deal with in a typical automotive structure is welded joints, Vann points out. Even with controlled conditions and robotic welding, there can be a considerable element of variability.

“Welding is very much subject to the quality of the process that you use, the geometry of that particular joint, and sometimes the skill of the welder, so we can see quite a big spread of strength and fatigue life,” he comments. “So, typically, we’ll use a stress life curve for a particular style of weld because the spread of data can be so great. That means we have to apply a big safety factor, so the allowable stress is on welds tend to be quite low.”

This is where the random road profile comes in, he explains: “It’s common for our analysis to flag up a low [fatigue] life on the ends of welds, where the weld run meets the parent metal. FEA analysis is totally deterministic in nature – it gives you a nice succinct peak stress. But we know that there’s actually a lot more going on there in reality, once you factor in the statistical variability of the loading and the material strength. So sometimes we have to make a judgement call and look at what would actually happen if a crack was to be initiated in that location. It reinforces the value of doing the physical testing.”

The most accurate models aren’t always the most useful

“With the increasing level of computational power, and the sophistication of the tools and the techniques that are becoming available, I’m sure we’ll see greater fidelity analysis. But the most accurate models aren’t always the most useful,” Vann points out. “Sometimes the most inaccurate models can be incredibly useful, because they start to illustrate large scale information about the concept or the development process very quickly.”

Essentially, it’s a law of diminishing returns. Highly inaccurate models don’t provide enough detail to be used as the basis of sound engineering decisions. But, at the other extreme, there comes a point where a huge amount of extra effort is required for a marginal improvement in accuracy. As a rule of thumb, Vann says, it’s the studies that yield an accuracy of 20 to 80 per cent that are the most useful, with little to be gained from going any further.

“Statistician George Box, coined the phrase ‘all models are wrong, but some models are useful,’ which is a great statement. I firmly believe that, and I regularly bring that up with our engineers,” notes Vann.

The usefulness of these simple models extends far beyond structural analysis. He points to the example of a multi-body simulation used to investigate the loads imparted into the body of a military vehicle while traversing obstacles. One of the standard tests involves climbing a vertical wall, which results in a sudden peak load as the wheels make the initial impact, followed by a second peak as the vehicle climbs up the wall.

“This was done for a feasibility study that needed to be carried out in a short amount of time. It’s a relatively low fidelity model, but the level of robustness achieved in the results was enough to justify the allocation of additional funding to progress the concept further,” he explains. “It enabled us to start looking at how the vehicle would traverse obstacles. Sometimes that’s a question of just helping you to visual things. For instance, this model can give us a very quick and simple illustration of how much extra wheel articulation we’d get if we disconnected the anti-roll bar. That would undoubtedly be subject to some level of error compared to physical testing, but it still captures the fundamental behaviour of the vehicle.”

Another example that he points to is the use of discrete element modelling (DEM) to simulate how the wheels of the vehicle will interact with a loose surface. This can be used in conjunction with a tyre model to predict how much grip will be available, which can give an idea of the vehicle’s off-road capability. It can also be used to generate a baseline input for the development of control systems, such as hill descent control. 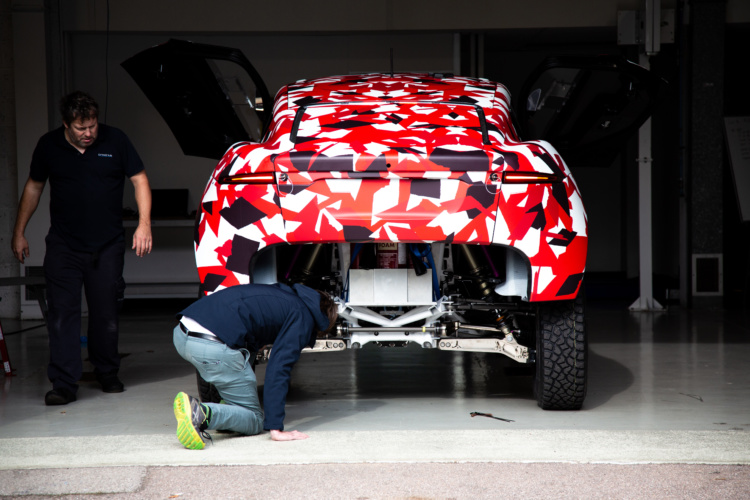 This ability to model the interaction between the vehicle and its environment can be useful for other studies, Vann points out: “The vehicle’s effect on the road surface can be an important factor in sectors like agriculture, heavy duty off-road and defence, where we’re interested in how vehicles can platoon. Multiple crossings on a soft surface can generate ruts in the in the roads, to the point where that can become a problem for deployment of vehicles. With this technique we can look at how different design concepts might affect that.”

Other simulation techniques provide data on things like powertrain performance and emissions. Collectively, they allow engineers to evaluate a complete digital model of the car before even the first prototype turns a wheel. And while the complexity of vehicles means that physical prototyping looks set to remain a factor for the foreseeable future, it’s clear that development will continue to push further and further into the digital domain.