Software agents will soon automate the mundane and time-consuming aspects of game testing.

Software agents will soon wander through the landscapes of 3D computer games, automating the mundane and time-consuming aspects of game testing.

That is if Queensland University of Technology Information Technology PhD researcher Alfredo Nantes has anything to do with it. He is creating intelligent tools that can spot visual anomalies in a 3D computer game.

'Visual anomalies are things such as incorrect shadowing or lighting, texturing problems and all artefacts that corrupt the realism of the game scene,' Nantes said.

Modern games are so complex, with environments rivalling the complexity of high-quality cinema animations, that the environment-testing process is very costly, both in time and other resources.

'Currently, the testing is done manually by people, but they may get tired and overlook something or be too involved in playing the game to see everything. Therefore an automated testing approach is very beneficial,' he added.

Combining his background in computer engineering with research into AI and computer vision, Nantes is programming a prototype debugger agent that will continually scan the images on screen for visual mistakes as the human game tester plays the game.

'The rate of mistake detection is very good,' he said. 'The next step in using this technology is to develop AI agents to move around the game like invisible characters and check the entire game environment, independent of the human play-tester,' Nantes added.

The agents will move autonomously, performing certain tasks and reporting back the results. 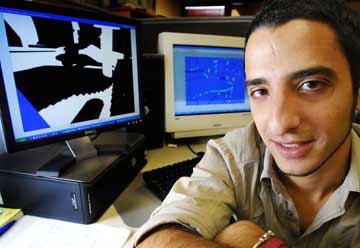 Nantes said this technology would not only improve testing accuracy, but it would also allow human game testers to focus completely on the 'playability' of a game.

'People need to test the entertainment factors of the game,' Nantes said. 'The agents will help them to enjoy the experience better.'

Nantes said the types of 3D games this technology could be used for are first-person shooters, role-play and adventure games.

Child's play in an undistributed future