A new system has been developed at the Georgia Institute of Technology and Emory University to test for mild cognitive impairment.

A new device developed at the Georgia Institute of Technology and Emory University may allow patients to take a brief, inexpensive test that could be administered as part of a routine yearly checkup at a doctor’s office to detect mild cognitive impairment (MCI) - often the earliest stage of Alzheimer’s.

Current assessment tests capable of detecting early Alzheimer’s typically are taken with a pen and paper or at a computer terminal and last about an hour and a half. They must be given by a trained technician in a quiet environment, because any distractions can influence the patient’s score and reduce the test’s effectiveness.

The Georgia Tech and Emory device, called Detect, gives individuals a roughly ten-minute test designed to gauge reaction time and memory - functions that, when impaired, are associated with the earliest stages of Alzheimer’s disease. The test is a specially modified, shortened version of the traditional pen and paper test and could be given repeatedly by doctors to evaluate any changes in cognitive functions.

The Detect system itself includes an LCD display in a visor with an onboard dedicated computer, noise reduction headphones and an input device. The display projects the visual aspect of the test and the headphones provide verbal instructions. 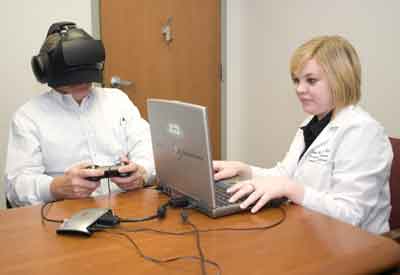 The portable test runs patients through a battery of visual and auditory stimuli such as pictures and words that assess cognitive abilities relative to age, gauging reaction time and memory capabilities. Because the device blocks outside sound and light from the patient’s environment, it can be administered in virtually any setting, providing consistent results.

Preliminary analysis of the first 100 patients of a 400-person clinical study being conducted at Emory’s Wesley Woods Center has shown that the 10-minute Detect test has similar accuracy to the 90-minute 'Gold Standard' pen and paper test.

Detect’s creators have now formed a company, called Zenda Technologies, to commercialise the device for MCI, as well as other conditions.