Australian drone startup Emesent goes below and beyond

Queensland-based drone startup Emesent has secured $3.5m in funding to bring its Hovermap product to market.

Hovermap is a LiDAR-based system deployed on drones to enable 3D simultaneous localisation and mapping (3D SLAM). Developed primarily for the mining industry, it allows for interior spaces to be autonomously navigated and mapped in the absence of GPS, as well as take gas readings and record video and images.

"This includes comparing the stope design to the actual post-blast shape to detect over-break and under-break, identification of geotechnical structures and accurate post-blast volume reconciliations. The data we gather improves a mine's productivity and provides a better understanding of conditions underground, all without sending surveyors and miners into potentially hazardous areas."

Emesent was spun out of CSIRO (Commonwealth Scientific and Industrial Research Organisation), Australia’s federal body for scientific R&D. The company claims to draw on a decade of work by CSIRO’s Robotics and Autonomous Systems group, and the recent funding round was led by CSIRO’s Innovation Fund alongside former Bechtel mining executive Andy Greig. 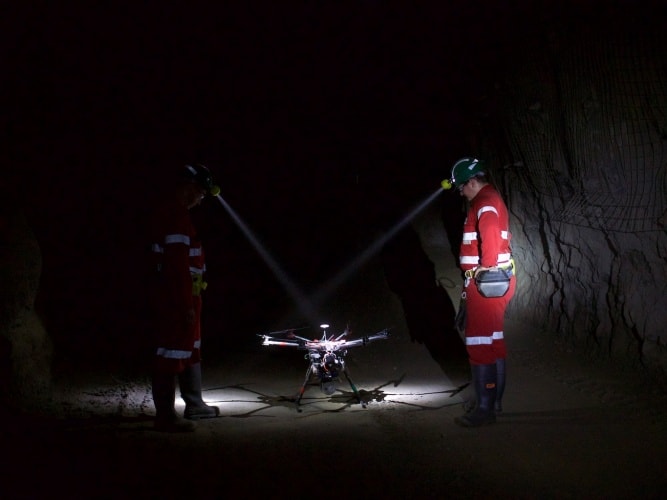 "The investment will give us the opportunity to build out our team from seven to 25, and make Emesent a global leader in drone autonomy and automated underground data collection and analysis," Dr Hrabar said.

Hovermap is already being used commercially for a range of applications in Australia, the US, Canada, China and Japan, with new mining-specific autonomous functionality being rolled out to selected clients. Emesent said the technology could also be applied to underground rail and road transport, telecommunications and disaster response. The company is also working with CSIRO's Data61 to compete in the US Defense Advanced Projects Agency's (DARPA) new Subterranean Challenge which aims to develop innovative technologies to rapidly map, navigate and search underground environments.

Depth thermography goes beyond the surface