A new detector so sensitive it can pick up a single molecule of an explosive such as TNT has been developed by researchers at the Massachusetts Institute of Technology (MIT).

To create the sensors, a team of chemical engineers led by chemistry professor Michael Strano coated carbon nanotubes with protein fragments normally found in bee venom. This is the first time these proteins have been shown to react to explosives, specifically a class known as nitro-aromatic compounds that includes TNT.

If developed into commercial devices, such sensors would be far more sensitive than existing explosives detectors that use spectrometry to analyse charged particles as they move through the air.

‘Ion mobility spectrometers are widely deployed because they are inexpensive and very reliable,’ said Prof Strano. ‘However, this next generation of nanosensors can improve upon this by detecting single molecules of explosives at room temperature and atmospheric pressure.’

Strano has filed for a patent on the technology, which makes use of protein fragments called bombolitins. ‘Scientists have studied these peptides but, as far as we know, they’ve never been shown to have an affinity for and recognise explosive molecules in any way,’ he said.

In recent years, Strano’s laboratory has developed carbon-nanotube sensors for a variety of molecules, including nitric oxide, hydrogen peroxide and toxic agents such as the nerve gas sarin. Such sensors take advantage of carbon nanotubes’ natural fluorescence, by coupling them to a molecule that binds to a specific target. When the target is bound, the tubes’ fluorescence brightens or dims.

The new explosives sensor works in a slightly different way. When the target binds to the bee-venom proteins coating the nanotubes, it shifts the fluorescent light’s wavelength instead of changing its intensity. The researchers built a new type of microscope to read the signal, which cannot be seen with the naked eye.

Each nanotube peptide combination reacts differently to different nitro-aromatic compounds. By using several different nanotubes coated in various bombolitins, the researchers can identify a unique ‘fingerprint’ for each explosive that they might want to detect. The nanotubes can also sense the breakdown products of such explosives.

‘Compounds such as TNT decompose in the environment, creating other molecule types, and those derivatives could also be identified with this type of sensor,’ said Strano. ‘Because molecules in the environment are constantly changing into other chemicals, we need sensor platforms that can detect the entire network and classes of chemicals, rather than just one type.’ 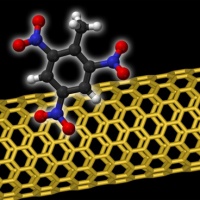 The MIT researchers’ sensor uses carbon nanotubes covered in protein fragments. It can detect even a single molecule of an explosive, such as a TNT molecule

The researchers also showed that the nanotubes can detect two pesticides that are nitro-aromatic compounds as well, making them potentially useful as environmental sensors.

The technology has already drawn commercial and military interest, according to Strano. For the sensor to become practical for widespread use, it would have to be coupled with a commercially available concentrator that would bring any molecules floating in the air into contact with the carbon nanotubes.

UK firm Inscentinel is also making use of bees’ ability to detect explosives but using live insects as part of a security device.