Coventry, 1885: John Kemp Starley unveils the Rover safety bicycle. With its wheels of equal size, chain drive to the rear, central and upright rider position, diamond frame of tubular construction and swept-back handlebars directly connected to the front forks, the Rover rapidly replaced the dangerous, cumbersome penny-farthing and other contraptions.

As London’s Science Museum puts it, ‘The design of the bicycle has remained much the same as that originated in the 1880s… The Rover may be regarded as the prototype which set the trend for future technical development and commercial production.’

Starley’s design was inspired. It built on work by the most imaginative engineers of the time. Tension-spoke wheels and ball bearings had been in use by 1870 and rear-wheel chain drive went back to at least 1874.

The original Rover also had an advantage over many earlier designs in the hugely efficient roller chain, invented in 1880 by Hans Renold in Manchester and still used today.

Bikes really came of age in 1888 with John Boyd Dunlop’s pneumatic tyre, and development continued apace, even after aircraft and cars drew the attention of ambitious designers. The Wright brothers were, famously, bicycle mechanics.

Modern materials and manufacturing have improved all aspects of the machine. But with his elegant optimisation of mechanical simplicity, efficient use of leg power, handling, balance, comfort and light weight, Starley perfected the bicycle 120 years ago.

Anyone who sets out to improve it faces a real challenge. Enter Dimitris Katsanis. As a race official for cycling’s international governing body, the UCI, and a composites engineer with Derbyshire-based Advanced Composites Group, Katsanis is especially qualified to try to build a better bicycle.

Four gold medals at the Sydney 2000 Olympics showed that British Cycling Federation (BCF) rider programmes were bearing fruit. But with races timed to a thousandth of a second, even world-class riders need world-class equipment, so in late 2001 the BCF gave Katsanis a £200,000 budget to arm the team with the fastest possible bikes for Athens in 2004. 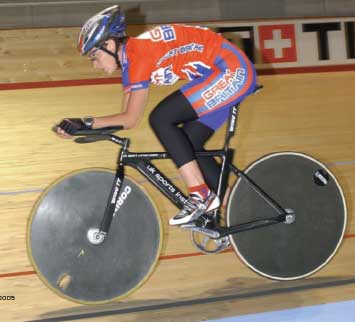 Katsanis was working under extraordinary constraints. After 1999, UCI rules outlawed designs used to great effect by British riders in the 1990s. Gone were monocoques like the Lotus-designed machine ridden to gold by Chris Boardman in Barcelona in 1992 and unusual riding positions pioneered by Scotland’s former world record holder Graeme Obree. A bike has to look like a bike.

Also, while aerodynamics were a major consideration — around 90 per cent of a rider’s energy goes to overcoming wind drag — rigidity in the frame was critical too. The Olympic races demand a chain-straining initial sprint to speed, so a whippy frame is counterproductive no matter how sleek it is.

One of the first decisions Katsanis and the BCF took in 2002 was to build the bikes around standard, commercially available component parts. When competing abroad, practical considerations like being able to buy spare parts cannot be ignored.

The issue of whether to stick with standard parts is being reconsidered as the bike programme looks ahead to the 2008 Games, but Katsanis said it’s not clear yet if a change is justifiable. Aerodynamics could be improved by building one-piece handlebars and stem units, but these aren’t adjustable and would cost thousands of pounds per rider.

Cost control is part of why the UCI constrains designers to the traditional diamond frame. Boardman’s 1992 bike launched a cycling arms race, and US claims of having spent $1m (£580,000) developing bikes for the 1996 Games (medal haul: two silvers) raised fears in the UCI that rich nations would undermine the spirit of competition by dominating.

Katsanis would like to have the design freedom that existed before 2000, if only so that ‘weird and wonderful bikes’ could help maintain public interest in the sport. Ensuring the ‘primacy of man over machine’ shouldn’t have to mean keeping ‘all bikes looking like the one I had when I was a kid’, he said.

Ultimately, the design of the Athens bikes was determined by a combination of UCI regulations and good engineering. The UCI lays down minimum and maximum tube diameters, for example, and bans large fillets between tubes.

To an engineer, greatest efficiency comes with short, straight tubes. The bikes weigh 6.8kg, the UCI minimum. ‘By the time you put all these things together you have limited room to move,’ said Katsanis. What makes the bikes special   ‘is good, straightforward engineering. You design from first principles.’

Fashion doesn’t concern Katsanis, but for the retail market it is a major consideration, according to Mark Reilly, founder and managing director of Brighton’s boutique cycle builder Omega Titanium. ‘A lot of it [design] is market led,’ he said.

Reilly believes customers prepared to spend £1,000 for a bare frame (£2,500-plus for a complete bike) are tiring of carbon fibre. Titanium frames are Omega’s main seller as they offer a good mix of durability, comfort, ride quality and light weight.

But the search for something new is actually luring some customers back to steel tubing, a material typically assumed to be all but dead in top-end bikes, he said.

The steel Reilly works with makes a road racing bike that equals titanium in weight and price, but, for all the technology employed, both machines, like their commercial rivals, share the same basic layout established by Starley.

Even Katsanis freely admits that, were the regulations to be lifted, not much would change in bicycles for general use. The UCI and paying customers alike demand that a bike looks like a bike.

The difficulty of achieving anything more than marginal improvement is highlighted by the fact that as it strives for faster track bikes the BCF makes no special effort to give its road riders a winning edge. According to spokesman Phil Ingham, ‘The vast majority of our other team bikes are off-the-peg machines from the US manufacturer Trek.’