A sport bike equipped with the new transmission will be released in Europe and North America in 2010, with sales to commence in Japan at a later date.

In order to respond to rider demands in a range of situations, the new transmission is equipped with three operating modes: two full-auto modes (D-mode for regular operation and S-mode for sport riding); and a six-speed manual mode, which delivers the same shift feel as a manual transmission.

The new transmission features a dual-clutch transmission configuration in which independent clutches are employed for the odd gears (first, third, fifth) and the even gears (second, fourth, sixth), respectively.

The two clutches operate alternately to effect gear changes. For example, when changing from first to second gear, an on-board computer detects the up-shift and engages second gear, then releases the first-gear clutch while engaging the second-gear clutch to achieve a seamless gear change.

Honda intends to gradually expand the deployment of the new transmission to more of its large-displacement motorcycles, particularly sports models destined for use in developed countries. 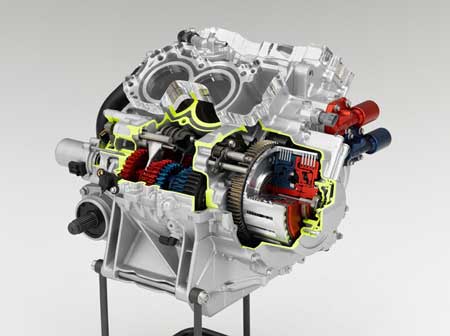