Biofuel cell can match the performance of platinum

Researchers in Germany have developed an enzyme-based biofuel cell that can match the performances of fuel cells made using platinum. 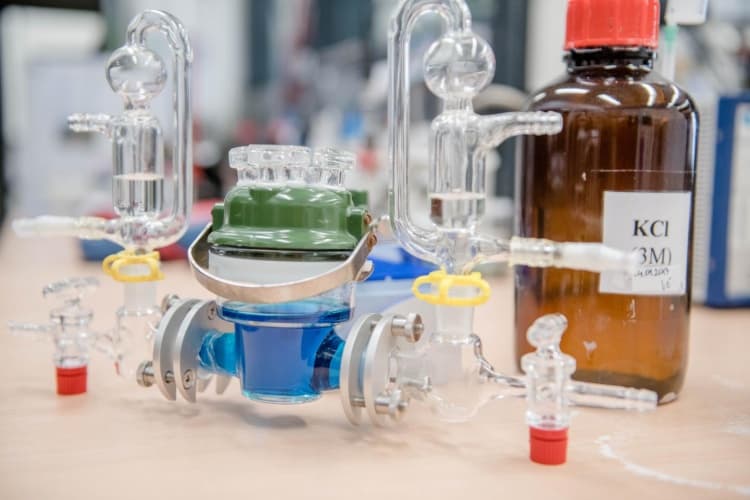 Described in Nature Communications, the biofuel cell uses the enzyme hydrogenase as a catalyst in place of the precious metal. However, enzymes must be stored in an aqueous environment, making it a challenge for the hydrogen fuel to reach the enzyme-loaded electrode. The researchers, primarily from the Centre for Electrochemical Sciences at Ruhr-Universität Bochum, overcame this using a novel system for packaging the enzymes with gas diffusion electrode technology.

"In this type of system, only a single layer of enzyme can be applied to the electrode, which limits the flow of current," said Bochum chemist Dr Adrian Ruff.

The Bochum team had developed a redox polymer in which to embed hydrogenases and protect them from oxygen. Previously, however, this polymer matrix had only been tested on flat electrodes, not on porous three-dimensional structures such as those employed in gas diffusion electrodes.

"The porous structures offer a large surface area and thus enable a high enzyme load," said Prof Wolfgang Schuhmann, head of the Centre for Electrochemical Sciences. "But it was not clear whether the oxygen protection shield on these structures would work and whether the system would then still be gas-permeable."

One of the problems with the manufacturing process is that the electrodes are hydrophobic while the enzymes are hydrophilic. The two surfaces therefore tend to repel each other. For this reason, the researchers first applied an adhesive electron-transferring layer to the electrode surface, onto which they then applied the polymer matrix with the enzyme.

"We specifically synthesised a polymer matrix with an optimal balance of hydrophilic and hydrophobic properties," explained Ruff. "This was the only way to achieve stable films with good catalyst loading."

According to the team, the resulting biofuel cell achieved a power density of up to 3.6 milliwatts per square centimetre and an open circuit voltage of 1.13 volts. This is just below the theoretical maximum of 1.23 volts and comparable to the performance of platinum-based fuel cells.