A consortium brought together by engineers at the University of East Anglia has launched the first bus in the UK to run on biomethane.

A consortium brought together by engineers at the University of East Anglia (UEA) has launched the first bus in the UK to run on biomethane.

The dual-fuel diesel-biomethane-powered bus made its first public showing at LCV 2009, a UK exhibition of low-carbon vehicle technology held at the Millbrook Proving Ground in Bedfordshire.

The dual-fuel vehicle is a standard Optare Solo single-deck diesel midibus from the Anglian Bus fleet. Originally powered entirely by diesel, the Mercedes-Benz engine was adapted to run for 60 per cent to 80 per cent of the time on biomethane.

Biomethane is chemically identical to the methane in natural gas but it is made by bacterial action on biowastes. Biomethane is extracted from landfill sites or from biogas produced in purpose-built anaerobic digestion facilities.

Project leader Dr Bruce Tofield, of UEA’s LCIC, said: ‘Dual-fuel use is a very attractive option. The vehicle can still run on diesel, but most of the time is running on biomethane gas, which is a much cleaner and less polluting fuel.

Funding for the project came partly from a European Union-sponsored Civitas programme in which the UEA and Anglian Bus were partners with Norwich, Norfolk County Council and cities across Europe. The Civitas initiative exists to promote cleaner and better transport in Europe’s cities.

LCIC scientists noticed how the buses in Malmo, Sweden, a partner city in the Civitas programme, were powered by methane, resulting in significantly lower levels of harmful emissions.  Of special interest was the fact that Malmo was beginning to use biomethane rather than natural gas to reduce greenhouse-gas emissions as well as pollutant emissions.

Working with local bus company Anglian Bus, the LCIC organised for one of Anglian’s Optare Solo buses to be converted to dual-fuel use. The fuel tanks were installed at Optare’s Leeds plant and the engine conversion undertaken at Hardstaff’s Nottinghamshire headquarters. In addition, Hardstaff is supplying a gas refuelling station to Anglian Bus and will keep it supplied with biomethane. 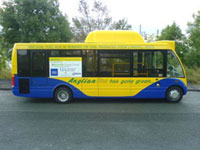 The first bus in the UK to run on biomethane was launched at LCV 2009, a UK exhibition of low-carbon vehicle technology held at the Millbrook Proving Ground in Bedfordshire