US defence research agency DARPA and Boeing are to collaborate on the production of an experimental space plane designed to enable on demand affordable access to space. 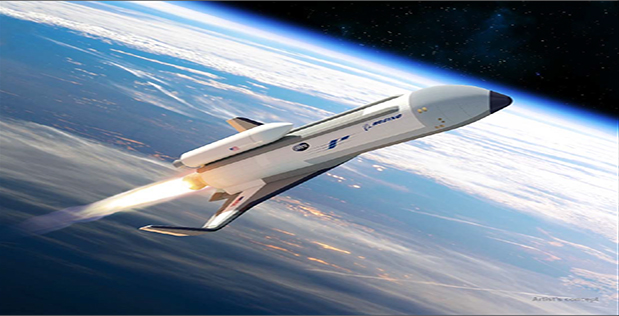 Dubbed Phantom Express, the hypersonic aircraft is being developed under DARPA’s Experimental Spaceplane (XS-1) program. According to the agency, it could radically reduce the cost of putting a satellite in orbit and bolster the ability to recover from the unexpected loss of critical military and commercial satellites.

Roughly the size of a business jet, the unmanned aircraft will take off vertically like a rocket and fly to hypersonic speeds. Once it reaches the edge of space, it will release an expendable second stage able to deploy a satellite. The reusable first stage would then bank and return to Earth, landing horizontally like an aircraft, and be prepared for the next flight.

“Phantom Express is designed to disrupt and transform the satellite launch process as we know it today, creating a new, on-demand space-launch capability that can be achieved more affordably and with less risk,” said Darryl Davis, president, Boeing Phantom Works.

The spaceplane will be powered by the Aerojet Rocketdyne AR-22 engine, a version of the legacy Space Shuttle main engine. This is designed to be reusable and operates using liquid oxygen and liquid hydrogen fuel.

The designers also plan to take advantage of technologies and support systems that have enhanced the reliability and fast turnaround of military aircraft. For example, easily accessible subsystem components configured as line replaceable units would be used wherever practical to enable quick maintenance and repairs.

The group hopes to have a demonstration vehicle ready by 2019, and plans to conduct flight demonstrations tests in 2020, when the intention is to fly the aircraft flying 10 times in 10 days.

According to DARPA the aircraft could reduce satellite launch costs to $5m per launch or less.