A new discovery on the internal structure of bone could lead to better treatment of osteoporosis and more durable aircraft components.

Density has long been the benchmark for gauging bone strength, with X-rays used to pinpoint strong and weak points as well as detect breaks. While the amount of load a bone can take is largely determined by density, durability over time is less well understood. Using new software, researchers from Cornell University explored the internal architecture of bone to determine what factors influenced long-term fatigue through cyclic loading.

Bone consists of vertical struts that provide structural integrity under load, as well as horizontal struts that, until now, were thought to have little influence on strength. But the Cornell analysis found that far from being superfluous, these horizontal struts were in fact the key to bone longevity over time. The work is published in the Proceedings of the National Academy of Sciences.

"If you load the bone just once, it's all about how dense it is, and density is mostly determined by the plate-like struts," said senior author Christopher Hernandez, associate professor in Cornell’s Sibley School of Mechanical and Aerospace Engineering and the Meinig School of Biomedical Engineering.

"But if you think about how many cycles of low-magnitude load something can take, these little sideways twiggy struts are what really matter. When people age, they lose these horizontal struts first, increasing the likelihood that the bone will break from multiple cyclic loads." 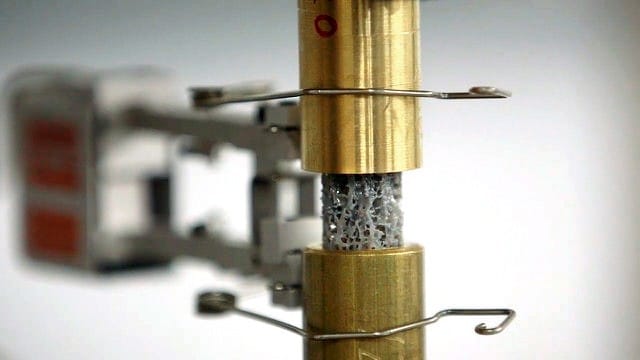 The Cornell team 3D-printed bone-like material made from a urethane methacrylate polymer. By varying the thickness of the horizontal rods in the material’s lattice, they were able to increase its fatigue life by up to 100 times. As well as the obvious implications for treating medical conditions such as osteoporosis, the discovery has major potential benefits in engineering, particularly for structures like aircraft wings.

"Every wind gust that an airplane hits causes a cycle of loading on it, so an airplane wing gets loaded thousands of times during every flight," said Hernandez.

"If you want to make a durable device or a vehicle that is lightweight and will last a long time, then it really matters how many cycles of loading the part can take before it breaks. And the mathematical relationship we've derived in this study lets somebody who's designing one of these lattice structures balance the needs for stiffness and strength under a single load with the needs for tolerating many, many lower-level load cycles."