Using an IBM supercomputer, scientists have demonstrated the most extensive simulation yet of real human bone structures.

Using an IBM Blue Gene/L supercomputer, scientists at ETH Zurich and the IBM Zurich Research Laboratory have demonstrated the most extensive simulation yet of real human bone structures.

The early detection of osteoporosis is crucial to prevent its progress. So a simulation that could provide doctors with a 'high-definition' view of the fragility, or strength, of bones would greatly enhance their ability to take preventative measures before the condition advances.

Literally “porous bone”, osteoporosis is characterised by loss of bone density, resulting in a high risk of fractures. Unfortunately, in many cases, osteoporosis is not diagnosed until a fracture has occurred. By then, however,  the disease is already in an advanced stage, requiring implants or surgical plates to treat or prevent further fractures.

Studies have shown, however, that bone mass measurements are only a moderately accurate way to determine the strength of the bone. That's because bones are not solid structures: inside an outer shell, they have a sponge-like centre. This complex microstructure accounts for the bone’s capability to bear loads.

Aiming for an accurate, powerful and fast method to automate the analysis of bone strength, scientists of the Departments of Mechanical and Process Engineering and Computer Science at ETH Zurich teamed up with supercomputing experts at IBM’s Zurich Research Laboratory. The method they jointly developed combines density measurements with a large-scale mechanical analysis of the inner-bone microstructure.

Using large-scale, massively parallel simulations, the researchers were able to obtain a dynamic map of strain which changes with the load applied to the bone. This map shows the clinician exactly where, and under what load, a bone is likely to fracture.

'Knowing when and where a bone is likely to fracture, a clinician can also detect osteoporotic damage more precisely and, by adjusting a surgical plate appropriately, can determine its optimal location,' explained Dr. Costas Bekas of IBM’s Computational Sciences team in Zurich.

The work is the first fundamental step towards a clinical use of large scale bone simulations. In future work, IBM and ETH scientists plan to aim to go beyond the calculation of static bone strength to simulate the formation of the fractures of individual patients, thereby taking another step towards detecting those people with a high fracture risk. 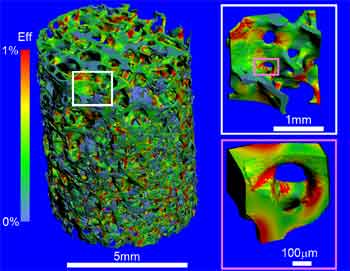