Boise, Idaho-based proSWAT has signed an exclusive license with the US Department of Energy’s Idaho National Laboratory to manufacture a new type of shotgun that combines two firearms into one.

The so-called Breaching Shotgun, a combination of a 12-gauge shotgun and a powerful rifle, was a collaborative project that involved several engineers and designers within the Lab’s National and Homeland Security Division.

The original proposal called for the development of a multifunctional breaching shotgun that could be attached to the frame of a standard issue M4 or MP5 rifle. It also specified that the shotgun’s trigger be front-mounted, allowing the user the ability to fire both weapons simultaneously.

Designers spent more than a year developing the firearm into a functioning model that met all the requirements, including a non-lethal element that allows users to fire bean bags, rubber bullets or tear gas from the shotgun chamber. Once a prototype firearm was complete, federal law enforcement agents, local police and INL security personnel tested it.

“The feedback from officers has been very positive,” said co-designer Steve Frickey. “They like the versatility of the firearm’s two-in-one design which saves them crucial seconds when they have to enter a building by force.” 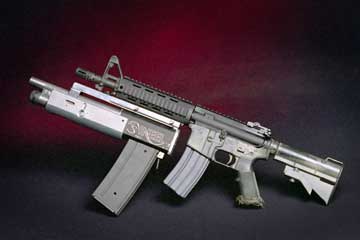 According to Frickey, before the Breaching Shotgun, it took at least two officers to knock down a door – one officer using a separate breaching firearm to remove the knob or hinges, and a second officer to step in during the raid. With this design, one officer has the ability to both breach a door and still have a functioning firearm for protection.

The Breaching Shotgun has five US patents pending for its design. It is expected to be introduced to US military and law enforcement markets in late 2005.