Researchers at the University of Illinois are developing panels of microcavity plasma lamps that may soon brighten people’s lives. The thin, lightweight panels could be used for residential and commercial lighting, and for certain types of biomedical applications.

'Built of aluminium foil, sapphire and small amounts of gas, the panels are less than 1 millimetre thick, and can hang on a wall like picture frames,' said Gary Eden, a professor of electrical and computer engineering at the University.

'Each lamp is approximately the diameter of a human hair,' said visiting research scientist Sung-Jin Park. 'We can pack an array of more than 250,000 lamps into a single panel.'

Completing the panel assembly is a glass window 500 microns (0.5 millimetres) thick. The window’s inner surface is coated with a phosphor film 10 microns thick, bringing the overall thickness of the lamp structure to 800 microns.

Flat panels with radiating areas of more than 200 square centimetres have been fabricated, Park said. Depending upon the type of gas and phosphor used, uniform emissions of any colour can be produced.

In the researchers’ preliminary plasma lamp experiments, values of the efficiency – known as luminous efficacy – of 15 lumens per watt were recorded. Values exceeding 30 lumens per watt are expected when the array design and microcavity phosphor geometry are optimised, Eden said. A typical incandescent light has an efficacy of 10 to 17 lumens per watt.

The researchers also demonstrated flexible plasma arrays sealed in polymeric packaging. These devices offer new opportunities in lighting, in which lightweight arrays can be mounted onto curved surfaces – on the insides of windshields, for example.

The flexible arrays also could be used as photo-therapeutic bandages to treat certain diseases – such as psoriasis – that can be driven into remission by narrow-spectrum ultraviolet light, Eden added. 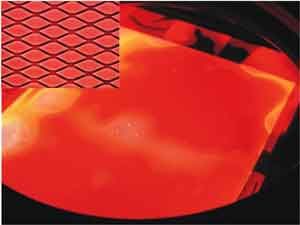 Photograph of an aluminium foil lamp having a radiating area of 225 square centimetres. The inset is a magnified view of several diamond-shapes microcavities.