Will LEDs ever be used in general lighting applications? The folks at Osram would like to have us believe so.

Will LEDs ever be used in general lighting applications? The folks at Osram would like to have us believe so – they’ve recently introduced a new six-chip LED package dubbed the Ostar, that can deliver 420 lumen from an operating current of 700 mA - brighter than a 20W low-voltage halogen lamp.

A specially developed hemispherical lens is part of the package. According to the company, the lens improves the efficiency with which light is emitted without affecting the beam characteristics. Basic versions without lenses are also available for customer-specific optics. 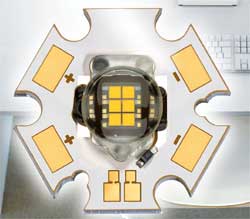 With their high luminous intensity, Osram says that the new LEDs are suitable for a variety of applications in general lighting, including individual workplace lighting, reading lights and car interiors. They can also be used as rapid flashing lights for use in effect lighting or stroboscopes because the strobe mode of operation does not shorten their life.