A carbon free minibus powered by three different green technologies – the first of its kind in Europe – was unveiled and officially launched in Wales last week.

The emission free tribrid bus is the result of an international collaboration, led and co-ordinated in Wales by Glamorgan University with funding from the Energy Savings Trust, sponsorship from the Welsh Assembly Government and the support of industry.

The bus was launched and publicly put through its paces for the first time at an Energy Savings Trust event to mark the successful completion of the project.

The minibus, which will be a commercially available prospect in the near future, benefits from three types of power delivery – hydrogen fuel cell, lead acid battery technology and ultra-capacitators.

The person responsible for driving forward the development was project manager Jonathan Williams, a senior lecturer at the Glamorgan University, who spent two and a half years perfecting it, based on his research into control of fuel cell systems.

Williams explained the combination of these three technologies overcomes the limitations of vehicles powered solely by battery or fuel cells. The combined system provides a more viable solution while also reducing the overall system costs.

Intelligent power switching methods then allow the charging strategy to be mapped to the fuel cell’s optimal performance which results in the vehicle automatically using the most appropriate form of power and level.

The vehicle is emission free and has a range of approximately 150 miles based on a city centre drive cycle and a top speed of 55mph.

Industrial collaboration was vital for the success of the project which has benefited from a lead acid battery developed by the Japanese Yuasa European Technical Centre at Ebbw Vale.

Hydrogenics, which is headquartered in Toronto and a developer of hydrogen products and power systems, supplied the fuel cell and technical assistance while Taylor Made Marine, based in Ross-on-Wye, designed and produced an aerodynamic lightweight carbon fibre pod to cover the fuel cells and hydrogen storage tanks.

The vehicle shell was provided by Dragon Coachworks, a joint venture between Dragon Trucks and Van and Brecon Coachworks. The partnership has a base in Merthyr where they intend to create a commercially viable manufacturing base in Wales to develop a range of zero emission vehicles including the tribrid minibus. 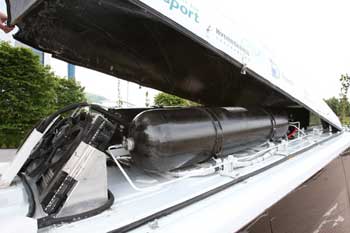 The minibus will be used for student transport at the university where it will service the existing Treforest, Glyntaff and Cardiff campuses. It will also link up with the university’s Renewable Hydrogen Research and Demonstration Centre currently under construction at Baglan Energy Park near Port Talbot.

This project, part-funded by the European Regional Development Fund (ERDF), is also being developed by the Hydrogen Research Unit at the university with the purpose of producing hydrogen from renewable energy sources in Wales and demonstrating the use of hydrogen within the building and for fuelling vehicles.

The minibuses will be commercially available as tribrids or any combination of the technologies. Steps to commercialise the tribrid bus will now be undertaken as a separate programme. It is anticipated that it will be available at a cost of £90,000 - £95,000. Battery only minibuses would be available for £40,000.