A forearm crutch that incorporates sensor technology to monitor whether it is being used correctly has been developed by engineers at Southampton University.

The crutch, which was developed by Prof Neil White and Dr Geoff Merrett at the university's School of Electronics and Computer Science in conjunction with Georgina Hallett, a physiotherapist at Southampton General Hospital, is fitted with three accelerometers. These detect movement and contain force sensors that measure the weight being applied to a patient's leg and the position of his or her hand on the grip.

Data is transmitted wirelessly to a remote computer and visual information is displayed on the crutch if the patient uses it incorrectly.

Prof White said: 'A growing number of people are in need of physiotherapy but reports from physiotherapists indicate that people do not always use crutches in the correct manner. Until now, there has been no way to monitor this, even though repeated incorrect use of the crutch could make the patient's injury worse.’

Hallett added: 'These crutches will make it much easier for patients to be taught how to use them properly, and how much weight they are allowed to put through their injured leg.

'This will help them to get out of hospital faster and also reduce their risk of further damaging an already injured leg by putting too much or too little weight through it.' 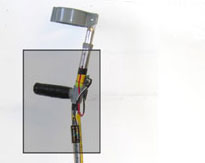 At the moment, the crutch is suitable for monitoring and training patients in hospital environments, but the researchers have plans to develop a pair for use in patients' homes.