Three pole-climbing serpentine robots developed at Virginia Tech could be used to take the place of construction workers.

Three pole-climbing serpentine robots have been developed by engineers at the Robotics and Mechanisms Laboratory (RoMeLa) of the at Virginia Tech.

The robots could take the place of construction workers tasked with dangerous jobs such as inspecting high-rises or underwater bridge piers.

The three robots - the HyDRAS-Ascent (Hyper-redundant Discrete Robotic Articulated Serpentine for climbing), the HyDRAS-Ascent II and the CIRCA (Climbing Inspection Robot with Compressed Air), recently took the grand prize at the 2008 International Capstone Design Fair.

The autonomous robots are designed to climb scaffolding and buildings by wrapping around a poll or beam and then rolling upward via an oscillating joint motion.

Using built-in sensors and cameras, the robots would then inspect the structures or handle other dangerous tasks now done by humans, said Dennis Hong, director of Virginia Tech’s Robotics and Mechanisms Laboratory and the faculty adviser on the project.

The robots are each roughly three feet in length and use a movement unique even in nature. 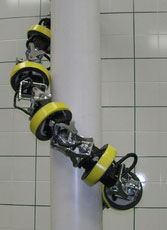 The HyDRAS robots operate using electric motors, while the CIRCA robot uses a compressed-air muscle.

Presently, the three robots operate by a tethered wire attached to a laptop, but Hong and his students are reconfiguring the devices to function independently using an onboard microprocessor and power source.

'This family of novel robots will serve as a practical inspection tool for construction sites without putting workers in harm’s way,' he added.

Climbing up the wall