A new, high-resolution, interactive map has been developed that shows the parts of the US where carbon dioxide emissions are the greatest.

'We've been attributing too many emissions to the northeastern US, and it's looking like the southeastern US is a much larger source than we had estimated previously,' said Kevin Gurney, an assistant professor of earth and atmospheric science at Purdue University and leader of the team that developed the map.

The maps and system, called Vulcan, show CO2 emissions at more than 100 times more detail than was available before. Until now, data on carbon dioxide emissions were reported, in the best cases, monthly at the level of an entire state. The Vulcan model examines CO2 emissions at local levels on an hourly basis.

Researchers say the maps also are more accurate than previous data because they are based on greenhouse gas emissions instead of estimates based on population in areas of the US.

To create the Vulcan maps, the research team developed a method to extract the CO2 information by using data on local air pollution, such as carbon monoxide and nitrous oxide emissions, which are tracked by the Environmental Protection Agency, the US Department of Energy and other governmental agencies.

'These pollutants are important to determine the ozone levels and air quality in major cities, and they are tracked on an hourly basis,' Gurney said. 'We've been able to leverage that data to determine the levels of CO2 being produced.'

The increased detail and accuracy of Vulcan will help lawmakers create policies to reduce CO2 emissions while also increasing scientists' understanding of the sources and fate of carbon dioxide, the researchers said.

Gurney said that the system, which is named after the Roman god of fire, quantifies all of the CO2 that results from the burning of fossil fuels such as coal and gasoline. It also tracks the hourly outputs at the level of factories, power plants, roadways, neighbourhoods and commercial districts. 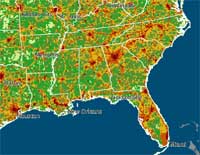 The three-year project, which was funded by NASA and the US Department of Energy under the North American Carbon Program, involved researchers from Purdue University, Colorado State University and Lawrence Berkeley National Laboratory.

The Vulcan data is available to download from the web site at http://www.eas.purdue.edu/carbon/vulcan.

A video of the maps and simulations of the atmospheric fate of fossil fuel CO2 also can be viewed on YouTube at http://www.youtube.com/watch?v=eJpj8UUMTaI.