Force-sensitive polymers under development at the University of Illinois have been shown to change colour when overstressed.

Force-sensitive polymers under development at the University of Illinois change colour when overstressed.

The polymers contain mechanically active molecules called mechanophores. When pulled with a certain force, specific chemical reactions are triggered in the mechanophores, leading to the change in colour.

In her previous work, Nancy Sottos, a Willett professor of materials science and engineering at the university, and one of the developers of the new polymer, showed that a mechanical force could be used to induce a reaction in mechanophore-linked polymers that were in solution.

Now, her research team has shown that it can perform a similar feat in a solid polymer.

To demonstrate the mechanochemical response, the researchers prepared two different mechanophore-linked polymers and subjected them to different levels of mechanical stress.

In one polymer – an elastomer – the material was stretched until it broke in two. A vivid colour change in the polymer occurred just before it snapped.

The second polymer was formed into rigid beads several hundred microns in diameter. When the beads were squeezed, they changed from colourless to purple. 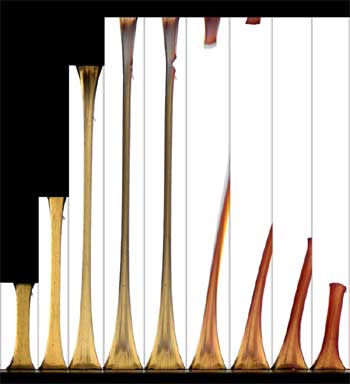 Progressive images of a mechanophore-linked elastomer during tensile loading. After the polymer reaches a critical strain, a force-induced red colour results from selective covalent bond cleavage in the mechanophore just prior to failure

Such polymers could be used in aircraft components to report damage and warn of potential component failure.