Connected and autonomous vehicles to deliver £51bn to UK economy

Connected and autonomous vehicles will help generate 320,000 jobs in the UK and deliver £51bn to the economy, claims a new report.

Commissioned by SMMT, Connected and Autonomous Vehicles: The UK Economic Opportunityfrom KPMG is said to represent the first comprehensive analysis of the UK opportunities provided by this new technology.

KPMG has found that these new vehicles will reduce serious road traffic accidents by more than 25,000 a year by 2030 and predicts that the UK will be a global leader in the production of this next generation of vehicles.

The figures were announced on March 26, 2015 at SMMTConnected, the first ever industry-wide event in Britain to explore the opportunities and challenges ahead and demonstrate how the UK automotive sector is already developing the cars of the future.

In a statement, transport minister Robert Goodwillsaid, “New technology is fundamental to government’s ambitious vision for our roads.  That is why we are making huge investments to support innovation, including £19m for real-world trials of driverless cars and £100m to research autonomous vehicles, as recently announced in the Budget. Connected and autonomous cars will help us move towards a smart, safe, efficient and low-carbon future.”

According to SMMT, the UK can lead the way in developing the connected and driverless cars of tomorrow as it has a two-year head-start on other European countries due to not ratifying the Vienna convention. This means on-road driverless car pilots can take place without the need for primary legislation.

John Leech, head of automotive at KPMG in the UK, said: “Connected and autonomous vehicles will promote social inclusion, reduce pollution and save lives. This represents an important opportunity for the economy but one that requires continued focus and commitment from government and business.” 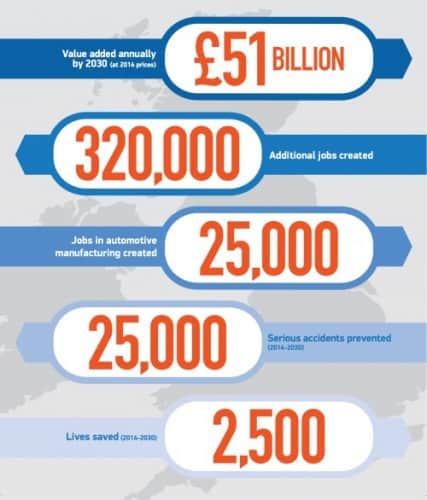 Autonomous and connected cars get set for UK road trials