Perovskite minerals have been investigated for some time as alternatives to crystalline silicon for photovoltaic cells, as they may be cheaper and easier to manufacture. A team at Rice University and Los Alamos National Laboratory has now discovered that the properties of a particular perovskite compound can be improved simply by illuminating it. 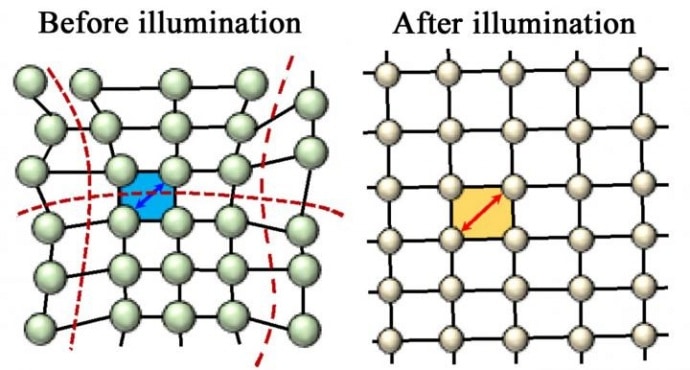 The team, led by Aditya Mohite and David Tsai, is investigating hybrid perovskite compounds with the general formula of AMX3, where A is a cation, M a divalent metal, and X is a halide. "It's a polar semiconductor with a direct band gap similar to that of gallium arsenide,” Mohite said.

Published in Science, the research explains that under normal circumstances these materials have a strained crystal structure, with a distorted lattice. But when illuminated, the lattice relaxes and uniformly expands in all directions. This aligns the crystal planes cures defects in the structure, which makes it easier for electrons to move through the system and deliver energy to end-user devices.

Although the band gap – the difference in energy between electrons involved in bonding and electrons free to move around the structure – is the same as in gallium arsenide illumination improves the absorption coefficient of the crystal to a value almost 10 times larger than GaAs across the whole solar spectrum, Mohite said. This implies that a 300-nanometer thick film of perovskites is sufficient to absorb all the incident sunlight. By contrast, silicon is an indirect band gap material that requires 1,000 times more material to absorb the same amount of sunlight.

The team made around 30 semiconducting, iodide-based thin films with perovskite-like structures. When “soaked” in sunlight, the energetic barrier between crystal and electrode largely vanished. Moreover, they found, the barrier remained quenched even half an hour after the light was turned off. The best of the samples increased its power conversion efficiency from 18.5 per cent to 20.5 per cent, while according to Mohite, the cells efficiency was double that of all the solution-processed photovoltaic technologies and only five per cent lower than that of commercial silicon-based photovoltaics.

"This work will accelerate the scientific understanding required to achieve perovskite solar cells that are stable," Mohite said.