Pollution from road traffic can be directed away from paths and back on to roads using curved barriers, according to a new UK study. 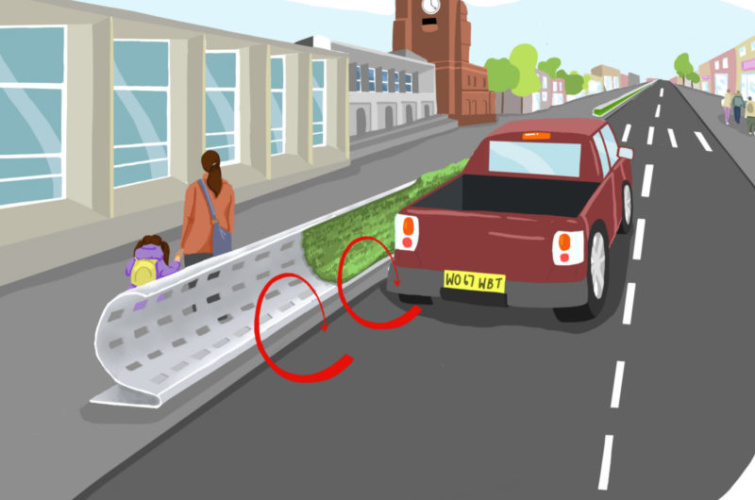 Researchers from Imperial College London used airflow modelling techniques to study the movements of roadside particulates and develop a solution to minimise the exposure of pedestrians on adjacent paths.

Air pollution, particularly in high-density urban areas, is a growing health concern around the globe and is estimated to be responsible for around 30,000 deaths in the UK alone each year. Imperial researcher Dr Tilly Collins became acutely aware of the extent of the issue while watching her child playing netball in a school playground alongside a busy London A-road.

“I thought to myself, what could be done? And done now?” said Dr Collins, a senior teaching fellow at Imperial’s Centre for Environmental Policy. “So, I started researching the effect of walls along roads. It became evident that along the pedestrian side of these roadside walls, there are vortices where the air quality can actually be even worse as the pollutants get trapped in them.”

Building off simple models, Dr Collins and her colleagues explored ideas of urban design that would mitigate these vortex effects and improve air quality for pedestrians, and particularly children who are closer to ground level. Inspired by airfield baffles and the curved sound-walls alongside motorways in Germany and the Netherlands, the researchers found that curved structures would more effectively disperse and reflect pollutants back towards the roads and would very rapidly improve air quality for pedestrians in an inexpensive manner.

Other benefits include reduced noise pollution and the barriers can also act as scaffolds for greenery, although a reduction in road visibility is one potential challenge that may arise. According to Dr Collins, however, the immediate health benefits of the barriers at the very least demand further investigation, alongside existing measures to reduce emissions at the tailpipe.

“Initially, it was difficult to convince others to get on board,” she explained. “The focus is very much on successfully reducing exhaust fumes, but there are these things we can do now to protect our children. The different sciences, urban designers and architects should collaborate more to design these solutions achieve air quality improvements at local scales more effectively and quickly.”