Engineers at MIT have developed a new technique for detecting damage in concrete bridges and piers.

Engineers at MIT have developed a new technique for detecting damage in concrete bridges and piers that could increase the safety of ageing infrastructure by allowing easier, more frequent, onsite inspections that don't interfere with traffic or service.

The technique involves use of a hand-held radar device that can "see" through the fibreglass-polymer wrapping often used to strengthen aging concrete columns to detect damage behind the wrapping not visible to the naked eye. Such damage can occur on the concrete itself, or to areas where layers of the wrapping have come loose from one another or even debonded from the concrete.

The new noninvasive technique can be used onsite from a distance of more than 10 metres (30 feet) and requires no dismantling or obstruction of the infrastructure. It provides immediate, onsite feedback.

Called FAR-NDT (far-field airborne radar nondestructive testing), the technique could prove especially advantageous for bridges that span rivers or highways, which can prove inaccessible for other inspection techniques.

The MIT researchers first reported the technique in the proceedings of the International Conference on Structural Faults and Repair held in Edinburgh, Scotland, last year.

‘The use of radar for detecting hidden defects and deterioration behind covered surfaces offers great potential for use in assessing the safety of bridges and buildings that have been retrofitted with composite materials,’ said Professor Oral Buyukozturk of the Department of Civil and Environmental Engineering (CEE), who developed the technique with CEE graduate student Tzu-Yang Yu and Dennis Blejer of MIT Lincoln Laboratory, where prototype radar measurements were made.

Fibreglass-polymer jacketing - shiny, textured fabric in black or ivory often seen wrapped around concrete columns - is widely used to upgrade existing concrete structures so they can carry a greater load or sustain additional earthquake impact. The wrap is also commonly used to retrofit structures that are damaged or deteriorating from weather or other wear.

Techniques presently available for inspecting these fibreglass-polymer jacketing systems require an inspector to come in direct or close contact with the structure. Some actually require removal of a physical sample, which itself could create a safety issue. The advantage of the new technique is that it allows a rapid inspection from a distance and provides computerized visualisation of the internal damages.

‘This technique would allow the engineers to perform reliable, in-situ inspection for visualizing and characterizing hidden damages from distances without having to endanger the structure by taking specimens from it, and at the same time, without disturbing the traffic or service,’ said Yu, whose PhD thesis will focus on this research.

The researchers have demonstrated the validity and potential of the new technique through experiments and computer simulations by sending and receiving radar signals using a "horn" antenna to inspect bridge piers from distances of more than 10 metres. In their experiments, a horn antenna transmits a radar signal to a fibre-wrapped concrete specimen, which reflects the signal back to the antenna. The collected data are then converted by an imaging algorithm into a visualisation of the interior of the specimen, including any damage.

The researchers say that the concept has been validated by their initial experimental results using an existing prototype radar system and by computer simulations. Future development of appropriate portable radar equipment for onsite use is necessary before the system can be placed in widespread use by industry.

The work was funded by the National Science Foundation. 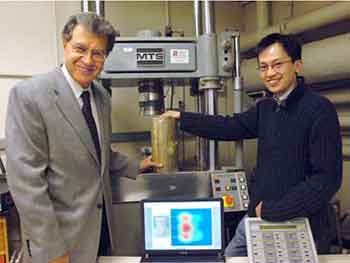 Professor Oral Buyukozturk of MIT's civil and environmental engineering department, left, and student Tzu-Yang Yu in the lab with a concrete sample and an image (on the laptop screen) produced with the noninvasive damage-assessing technology they developed.