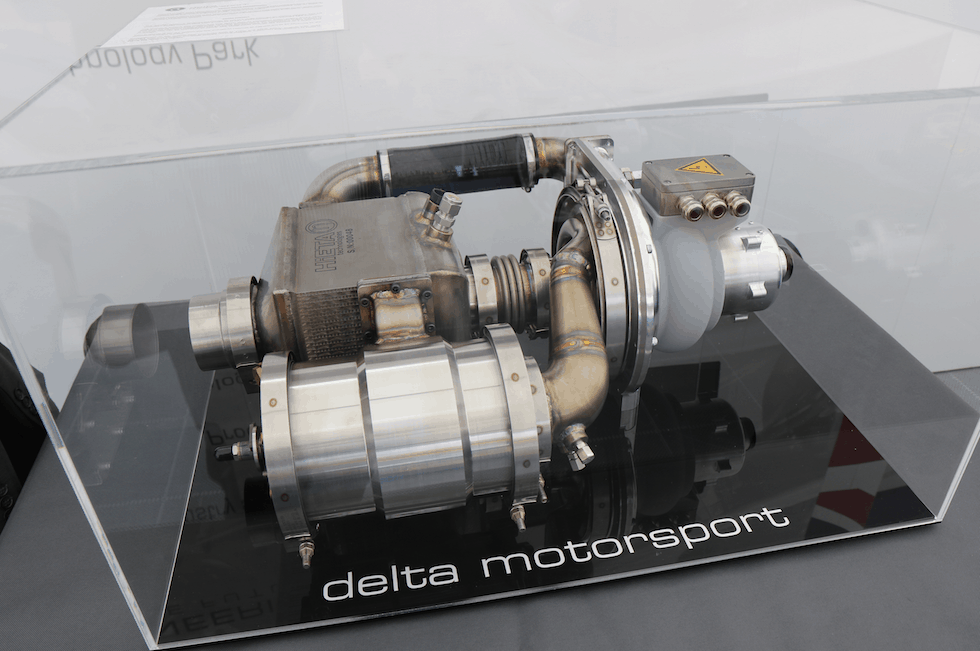 Developed with support from Innovate UK, the Micro Turbine Range Extender – dubbed MiTRE – was unveiled at the show by the UK’s climate change and industry minister, Nick Hurd.

Capable of running on petrol, kerosene or diesel, the micro turbine spins at up to 120,000rpm, driving a 17kW generator.

“Range extenders are something we’ve been looking at since about 2010 when we first began developing our own electric vehicle, the E4,” Liam Crabb, Delta Motorsport operations manager told The Engineer. “Through Innovate UK and our technical partners we’ve now been able to push the project forward.”

The plan is to supply the range extender as a complete system, including the generator and the power electronics. With all the ancillaries (minus fuel) it is said to weight approximately 45kg – considerably less than having an extra adult passenger onboard. Delta Motorsport plans to take the design through to production, although that’s unlikely to happen in-house.

There’s also a 35kW variant under development. This larger unit is said to be capable of maintaining the state of charge on a large passenger EV, such as a Tesla, yet the company claims it is approximately 40 per cent smaller and 50 per cent lighter than the equivalent piston engine device.

“A gas turbine is lightweight, small to package and it requires less ancillary systems than a piston engine – there’s no external cooling for instance,” Crabb explained. “The high speed nature of the project has been challenging at times, though. Having Schaeffler onboard has helped massively with the design of the bearings, while HiETA has provided a sintered heat exchanger, which simplifies what would normally be a very complicated piece of equipment.”

Delta Motorsport has demonstrated the concept by fitting the existing 17kW unit to one of its lightweight E4 coupés. That could be just the beginning, however. Niche car manufacturers Ariel and Morgan have already signed up to develop the concept further and Delta Motorsport is said to be considering a number of different production options.