BAE Systems is to take a 50 per cent holding in Diamond Detectors, a subsidiary company set up by Element Six to manufacture innovative diamond detectors and sensors.

BAE Systems is to take a 50 per cent holding in Diamond Detectors, a subsidiary company set up by Element Six to manufacture diamond detectors and sensors for radiation monitoring applications.

Diamond Detectors was formed in 2007 with the aim of incorporating synthetic diamond made by chemical vapour deposition developed by Element Six into novel detectors for a range of markets.

It is one of the first companies to be included in the growing investment portfolio of Element Six’s venture capital fund, E6 Ventures.

Using diamond as a detector is not a new idea. As early as the 1920s, highly selected natural diamonds were being used for UV detectors.

The recent commercial availability of high purity single crystal diamond with excellent bulk uniformity is, however, a new development and opens up new potential markets for novel detectors in a wide range of industries.

It also enables designers to overcome the inherent problems associated with the selection of appropriate natural diamonds in existing detector applications where diamond is used.

Initial products under development cover applications in high energy physics research such as the Large Hadron Collider (LHC) project at CERN, the new Facility for Antiproton and Ion Research (FAIR) under development at GSI in Germany, as well as the Diamond Light Source, the largest UK-funded scientific facility to be built for more than 30 years. 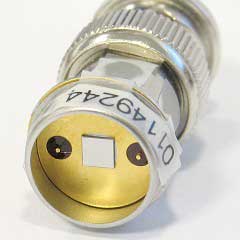 Industrial applications include detectors for use in medical dosimetry, data logging in oil well exploration, UV applications such as photolithography and cleaning for semiconductor manufacturing.

Kevin Oliver, general manager of Diamond Detectors, said: ‘Diamond Detectors is already working closely with a number of industrial partners on the future commercialisation of these potential products.’