This offers a completely new way to control molecules in liquid crystals, since it allows the crystals to move in a variety of directions to create optical components such as lenslet arrays.

This technology is still in the early phase of development, but recent trials indicate that potential applications exist in adaptive optical systems such as the wavefront sensors used in optometry, digital video cameras, optical diffusers and emerging head-up display devices.

Liquid crystal (LC) molecules are shaped so that they naturally align with each other if put in a cell to form an optically active pixel. In a display device, the liquid crystal pixel is used to change the polarisation of the light passing through it and the degree of change (seen as contrast) is achieved by applying a voltage onto electrodes at the top and bottom of the cell.

The applied voltage makes the LC molecules rotate in the cell and changes their orientation with respect to the light passing through the cell. But this cell geometry limits the ways in which the light interacts with the liquid crystal molecules to a two-dimensional plane.

In the photograph below, for example, a thin conducting rod has been added to the lower electrode to create a Gaussian electric field profile that forms a tiny microlens in the LC material. 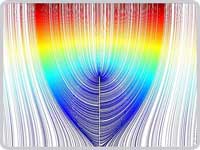 With many rods it is possible to create an array of micro lenses, which can have a focal length that varies with the applied voltage. Such a reconfigurable array has many uses in adaptive optical systems and 3D holographic displays.

More information on Wilkinson's work can be found on the Centre of Molecular Materials for Photonics and Electronics (CMMPE) group website.