A consortium led by Drax Group has unveiled plans for transforming the Humber industrial region into a zero carbon cluster using hydrogen, biomass and carbon capture. 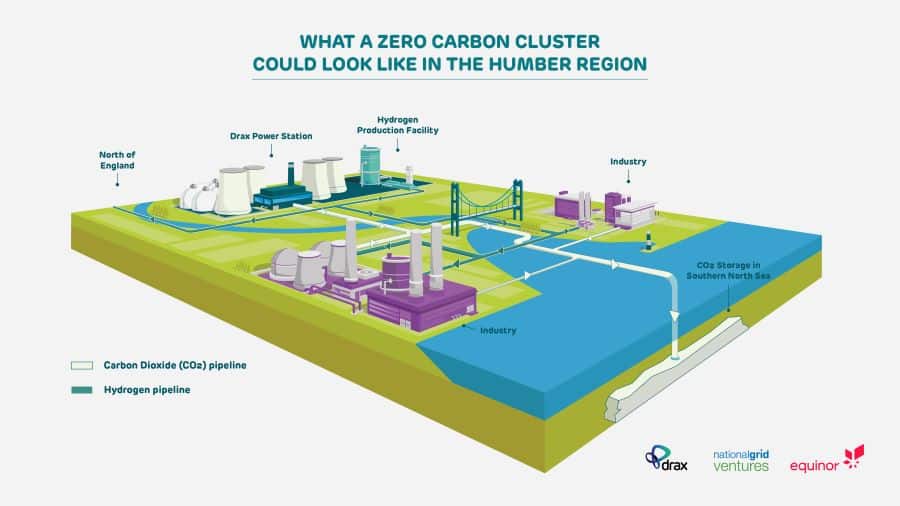 The partnership will see Drax working alongside National Grid Ventures and Norwegian energy company Equinor. Together, the three plan to integrate a low-carbon energy system that would see hydrogen production co-located at the existing Drax Power Plant, which currently burns a mixture of biomass and coal. This hydrogen would then be supplied to local industry to help it decarbonise.

Drax’s bioenergy carbon capture and storage (BECCS) pilot – which is today collecting one ton of CO₂ per day -  would be scaled up massively to capture 40,000 tons of CO₂ daily from the plant’s four biomass burning units. The plans also call for the construction of a pipeline to carry captured CO₂ from Drax and local industrial plants to the Endurance and Bunter aquifer in the North Sea, where it would be permanently sequestered. According to Drax, the BECCS project could see the power plant become carbon negative by the 2020s.

“With Drax’s carbon negative power station, the Humber region could lead the world in new technologies that can deliver for the climate and the economy, helping to create a cleaner environment for future generations whilst creating new jobs and export opportunities for British businesses,” said Drax Group CEO, Will Gardiner.

The ambitious Humber project comes on the back of the Net Zero report recently published by the UK’s Committee on Climate Change. It was proposed in the report that at least one of the UK’s CCUS (carbon capture, utilisation and storage) regional clusters should also be deploying low-carbon hydrogen production at scale by 2030 if net zero emissions are to be reached by the middle of the century. The consortium has said it hopes to have a large-scale hydrogen demonstrator in place at Drax by the mid-2020s.

“We all agree that we must act now to start delivering a ‘net-zero’ carbon economy,” said Jon Butterworth, chief operating officer of Global Transmission at National Grid Ventures.

“We have seen rapid progress in decarbonising energy through established technologies such as wind power, solar and electricity interconnectors. CCUS and hydrogen create a new pathway to greater decarbonisation of the energy system and provide a platform for decarbonising other areas of our economy, which will be to the benefit of current and future generations.”