Supercapacitors are electronic components which can act like batteries, storing and releasing charge quickly. Flexible supercapacitors have been made before, but can only be shaped and stretched in predetermined ways, limiting their suitability for clothing applications. The Singapore team, from the School of Materials Science and Engineering of Nanyang Technical University, has been working on this topic for some years, and now claims to have developed a far more versatile material. 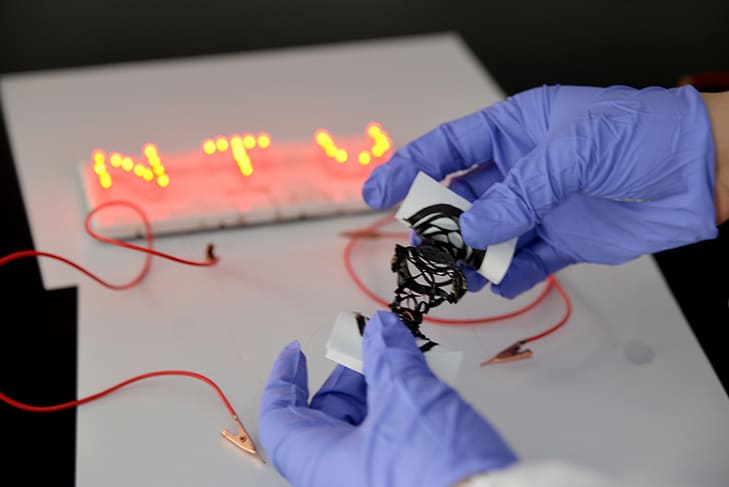 Rather than only being suitable for predetermined designs and structures, the shape and structure of the new material can be changed after manufacture without compromising its function as a power source, the team said in a paper in the journal Advanced Materials. It can be stretched in multiple directions, and when made into a honeycomb-like structure it can store electrical charge four times higher than other stretchy supercapacitors. Moreover, when stretched to four times its original length, it retains 98 per cent of its original charge capacity, even after 10,000 stretch-and-release cycles.

The material is made from a composite material containing manganese dioxide nanowire electrodes. These are much longer than previous manganese dioxide fibre-based flexible supercapacitors, and reinforced with a network of carbon nanotubes and nanocellulose fibres, which the team said allows the electrodes to withstand the strain of stretching and folding. The material is easy to connect to other electronic components, and is claimed to be cheap to manufacture: team leader Prof Xiaodong Chen said it should cost around 10 US cents per square centimetre to make. 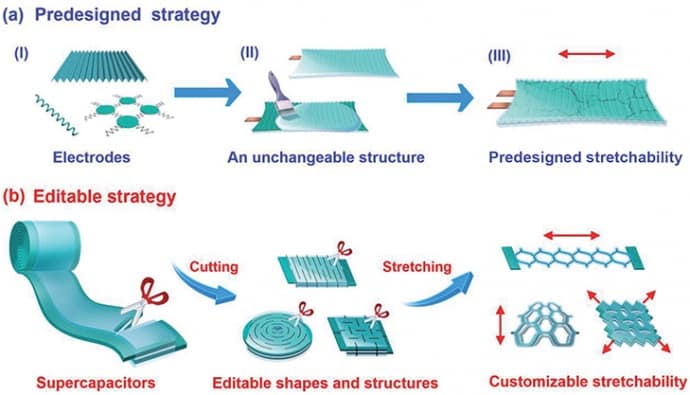 Above, the previous strategy for non-editable flexible supercapacitors; below, Prof Chen's team's material

To test the material, the team attached it to a sensor which they placed on a test subject’s elbow. The material supplied power reliably to the sensor even when subject’s arm was swinging, and the sensor returned a steady stream of signal to a wireless heart rate measurement device placed nearby.

“My own dream is to one day combine our flexible supercapacitors with wearable sensors for health and sports performance diagnostics, Chen said. “With the ability for wearable electronics to power themselves, you could imagine the day when we create a device that could be used to monitor a marathon runner during a race with great sensitivity, detecting signals from both under and over-exertion.”

Moreover, he added, the material has potential for “Internet of Things” applications. “It also opens up all sorts of possibilities…when wearable electronics can reliably power themselves and connect and communicate with appliances in the home and other environments,” he said.

Sponge-like carbon can be used as a supercapacitor