The Earth-bound twin of the Rosalind Franklin ExoMars rover has drilled and extracted samples from 1.7m below the surface of a simulated Mars environment.

The depth is significantly deeper than any rover has drilled on the Red Planet, where the deepest samples taken are from just 7cm. Reaching 1.7m in the simulated conditions bodes well for the ExoMars mission proper, the launch window of which opens in just over one years’ time on 20 September 2022.

ExoMars navigation software gets put through its paces

Known as the Ground Test Model, the ExoMars twin rover is fully representative of the vehicle that will be sent to Mars. The first samples have been collected as part of a series of tests at the Mars Terrain Simulator at the ALTEC premises in Turin, Italy. The drill was developed by Leonardo, with Thales Alenia Space the prime contractor for the overall ExoMars mission.

This first sample was taken from a block of cemented clay of medium hardness. Drilling took place on a dedicated platform tilted at seven degrees to simulate the collection of a sample in a non-vertical position. The sample was taken in the shape of a pellet of about 1cm in diameter and 2cm long. Rosalind Franklin’s drill retains the sample with a shutter that prevents it from dropping out during retrieval. 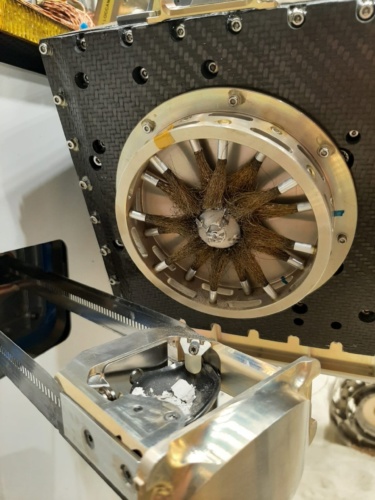 Once captured, the drill brings the sample to the surface and delivers it to the laboratory inside the rover. A crushing station grinds the sample to a fine powder, which is then distributed to different ovens and containers for analysis. Acquiring and testing samples from far beneath the surface is at the core of the ExoMars mission, as this is the depth where any signs of organic life from billions of years ago are most likely to be found.

“The reliable acquisition of deep samples is key for ExoMars’ main science objective: to investigate the chemical composition —and possible signs of life— of soil that has not been subjected to damaging ionising radiation,” said ExoMars project scientist Jorge Vago.

Rosalind Franklin’s drill works on rotation. A series of tools and extension rods are fitted to form a ‘drill string’ and can reach a full length of 2m when all are connected. The drill can penetrate the ground at 60 rotations per minute, depending on the consistency of the soil. Given the parameters under which it operates, however, progress for the rover can be slow; digging into sandy or clay solid materials takes place at between 0.3 and 30mm per minute.

“Drilling hard stones to a depth of two metres on a mobile wheeled platform with less than 100 watts of power is a complex task,” explained Andrea Merlo, ExoMars Rover functional engineer from Thales Alenia Space.