Deployment of domestic hydrogen appliances could help decarbonise UK energy usage. But how feasible is it? Stephen Livermore, an engineer

with Frazer-Nash Consultancy discusses the findings of a recent study carried out for the Department of Business, Energy and Industrial Strategy (BEIS).

The provision of heat currently accounts for approximately half of UK energy consumption and one third of carbon dioxide emissions. The government has signalled its intentions for affordable low-carbon energy through the Clean Growth Strategy, and achieving this is likely to require almost full decarbonisation of heat in buildings. There are a number of technologies with the potential to play a role in decarbonising heat, including heat networks, heat pumps, hydrogen and biogas, but it is not yet clear which will work best at scale.

There has been an increasing interest in the role hydrogen could play in the decarbonisation of heat in the UK. Hydrogen could be used in the existing natural gas system, either by blending with the natural gas or by converting the gas system completely to hydrogen. This has the potential to significantly reduce carbon emissions, if low carbon methods of producing hydrogen can be developed and delivered at scale. 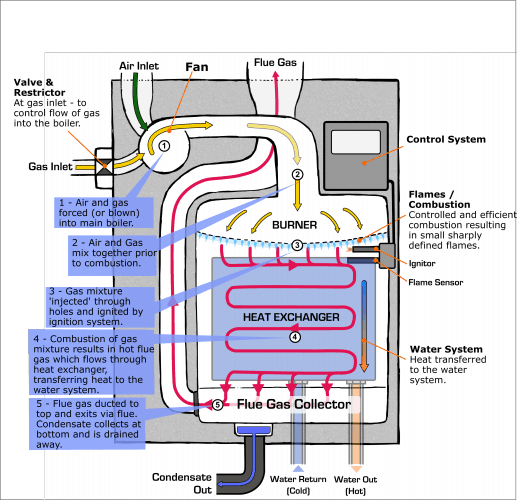 The main options include Steam Methane Reformation (SMR) combined with the sequestration (capture and long-term storage) of the carbon, or renewables-powered electrolysis of water. This study has sought to understand whether it is even possible to develop domestic gas appliances which achieve the necessary performance and safety when using 100% hydrogen.

For a given delivery pressure, hydrogen and natural gas provide a similar energy flux when injected through a burner and combusted on the other side. However, hydrogen has a greater flammability range than natural gas and a higher flame speed. Gas burners are designed so that the speed of gas flowing through burner ports is greater than the flame speed, in order to limit the flames to the outside of the port. With a greater flame speed, hydrogen is more prone to light-back, where it propagates back upstream, and given its greater flammability range this poses a risk of ignition to any gas mixtures behind the burner. 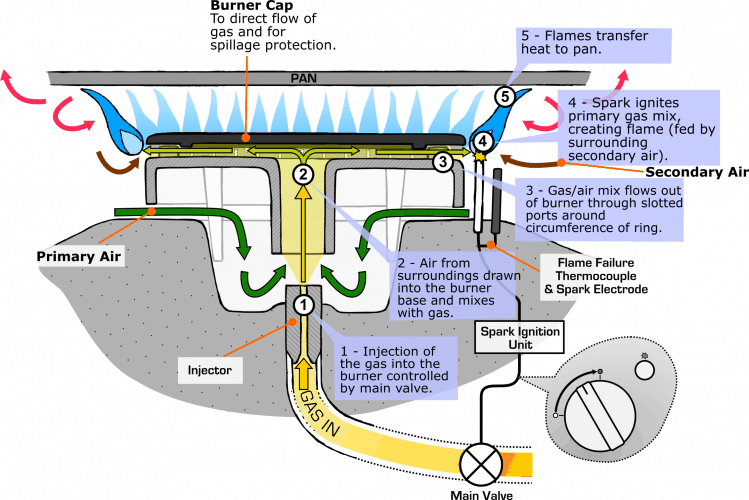 Domestic natural gas hobs use atmospheric burners that operate by injecting gas, normally from below, into the burner assembly (Figure 1). The jet of gas entrains the surrounding air underneath the burner and this provides some primary aeration before the gas-air mixture flows through holes (ports) around the burner where it is ignited on the outer side. The primary aeration, generated by the momentum of the gas jet, is not sufficient for full combustion and additional air (secondary air) is naturally drawn into the flame as it burns. Switching to hydrogen will require the removal of the primary airflow, as well as any void spaces where combustible gases could accumulate and potentially ignite. The flame failure devices, which detect when gas is flowing but no flame is present, typically take around 30 seconds to respond in natural gas appliances – a significantly faster response time may be required for hydrogen. Ovens and fires differ slightly from hobs in their geometry but work in a similar manner, so similar changes will be required.

Modern condensing boilers use pre-mix burners to mechanically draw in natural gas and mix it to stoichiometric proportions prior to combustion (Figure 2). The latent heat is captured by condensing out water vapour from the exhaust in the heat exchanger and this requires the burner system (and flames) to be downwards facing so that the condensate drips down away from the burner. Pre-mixed burning is likely to be incompatible with hydrogen, as it will be difficult to safeguard the volume of combustible gas mixture behind the burner surface from light-back.

One possibility is to introduce the air to the gas, or perhaps even both gases simultaneously, directly at the burner surface. Unlike the other appliances, boilers use ionisation sensors to detect poor combustion, through the presence of hydrocarbons in the exhaust. These hydrocarbons do not occur when hydrogen is burned and alternative sensors will need to be developed for domestic boilers, perhaps using ultraviolet (UV) or infrared (IR) sensors which are widely used in other industries.

There are a number of other engineering challenges that will need to be addressed:

Engagement with domestic gas appliance manufacturers has suggested that new appliances could be made to run on 100% hydrogen. By designing with hydrogen in mind from the outset, manufacturers see no reason why they couldn’t offer similar performance, lifetime and reliability as current natural gas appliances. The adaptation of existing appliances (similar to the approach used in the town gas conversion in the 1970s) is possible, although it is likely that there will be compromises in the performance, as any remaining components will not have been optimised for the higher temperatures.

The development of dual-fuel appliances, which can readily switch between the gas types, could significantly reduce the burden at the point of switchover, although these are likely to require doubling up of certain components and this would result in larger sizes and higher production costs. In the context of a single gas changeover, ‘hydrogen-ready’ appliances may be an attractive middle ground. Analogous to HD ready televisions, these appliances could developed with hydrogen in mind but temporarily back-fitted to run on natural gas up to the point of changeover. If a switchover occurred a simple, or even standardised conversion kit could be used to readily convert these appliances.

Stephen Livermore is a Chartered Mechanical Engineer at Frazer-Nash Consultancy.  He undertakes thermo-fluid analysis of industrial processes and the built environment as well as broad multi-disciplinary research projects.  He has a PhD in modelling of naturally ventilated buildings and a strong interest in the development of technologies for decarbonising heat.

READ MORE: HOW THE HYDROGEN ECONOMY COULD MAKE A COMEBACK

Converting the gas network to hydrogen