For the first time in eight years, fast jets have been in operation from a British aircraft carrier as tests begin of F-35 Lightning IIs from HMS Queen Elizabeth. Tests will take 11 weeks, during which time more than 500 takeoffs and landings are scheduled to take place.

The jets taking part in the trials are not part of the permanent complement of aircraft that will be stationed on the carrier. These have now started to arrive in the UK, to their land base at RAF Marham in Norfolk.

The first F-35Bs to land on the carrier were piloted by Royal Navy Commander Nathan Grey and RAF Squadron Leader Andy Edgell, using the aircraft’s vertical landing capability, and shortly afterwards Cmdr Gray became the first pilot to take off from the carrier using its ‘ski ramp’. Queen Elizabeth has the capability to carry up to 24 F-35s, although the number on board any particular time will vary depending on the mission the ship is carrying out. The trials are being carried out by a group known as ITF (integrated test force), made up of British and American personnel dedicated to trials of the new aircraft. Once the tests have been completed, the permanent complement will be cleared to begin operations from the deck of the carrier. 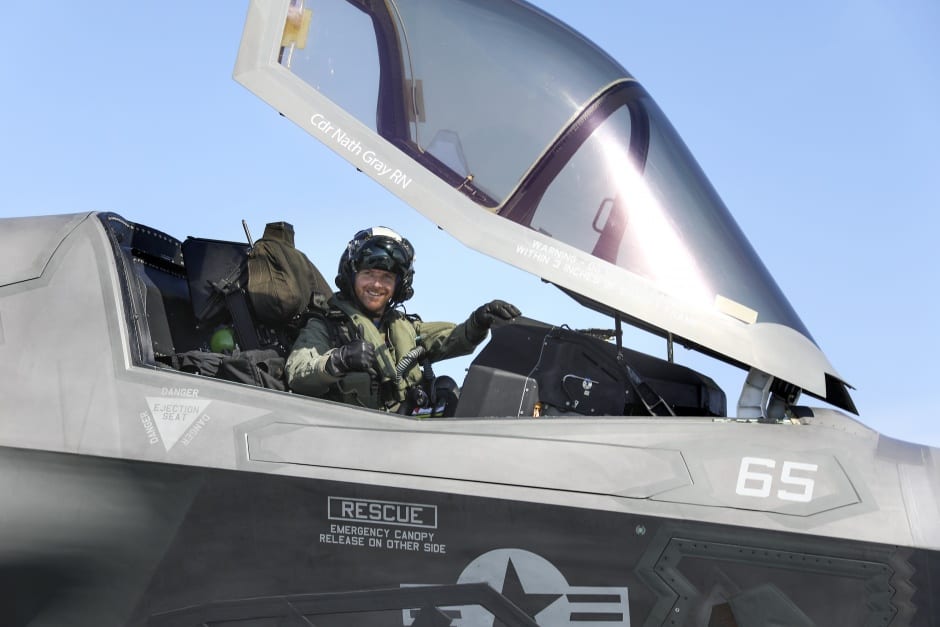 The commanding officer of Queen Elizabeth, Capt Jerry Kidd, was by coincidence also in command of the last carrier on which Sea Harriers were in operation. "I am quite emotional to be here in HMS Queen Elizabeth seeing the return of fixed-wing aviation,” he said. “The regeneration of big deck carriers able to operate globally, as we are proving here on this deployment, is a major step forward for the United Kingdom’s defence and our ability to match the increasing pace of our adversaries. The first touch-downs of these impressive stealth jets shows how the United Kingdom will continue to be world leaders at sea for generations to come.”

Cmdr Gray was equally touched by the experience. “No words can explain how it felt to turn the corner at 500mph and see HMS Queen Elizabeth awaiting the arrival of her first F-35 jets. I feel incredibly privileged,” he said. “For a naval aviator it is always a special moment when you spot the carrier in the distance, hidden within a grey expanse of ocean. HMS Queen Elizabeth is a floating city, home to hundreds of fellow sailors and Royal Marines, and it's been a particularly poignant day.”

The trials are taking place off the East Coast of the United States, accompanied by the Type 23 frigate HMS Monmouth and the USS Lassen, an Arleigh Burke-class destroyer. After completing them the carrier is expected to visit New York. After that, it will return to its home base of Portsmouth, and is expect to become fully operational in 2021. Meanwhile, BAE Systems is still working on Queen Elizabeth’s sister ship, HMS Prince of Wales, at Rosyth dockyard, where it is nearing completion.